Continuing the theme of looking at ICSE 2016 papers, I want to share with you some interesting work by Xiao et al. on “Identifying and quantifying architectural debt.” That paper however draws heavily on two previous works that it makes sense to look at first. So today we’re going back to ICSE 2014 to look at “Design Rule Spaces.” In doing so, we’re taking a step up from thinking about finding problems “in the small” with individual lines of code, to thinking about design and architectural ‘bugs’.

The authors get off to a good start by stating that ‘our work is rooted in Baldwin and Clark’s concept of design rules – architectural interfaces that decouple the system into independent modules.’ That’s a book (Design Rules: The Power of Modularity that I happen to own and previously studied carefully shortly after it first came out (16 years ago, wow!). 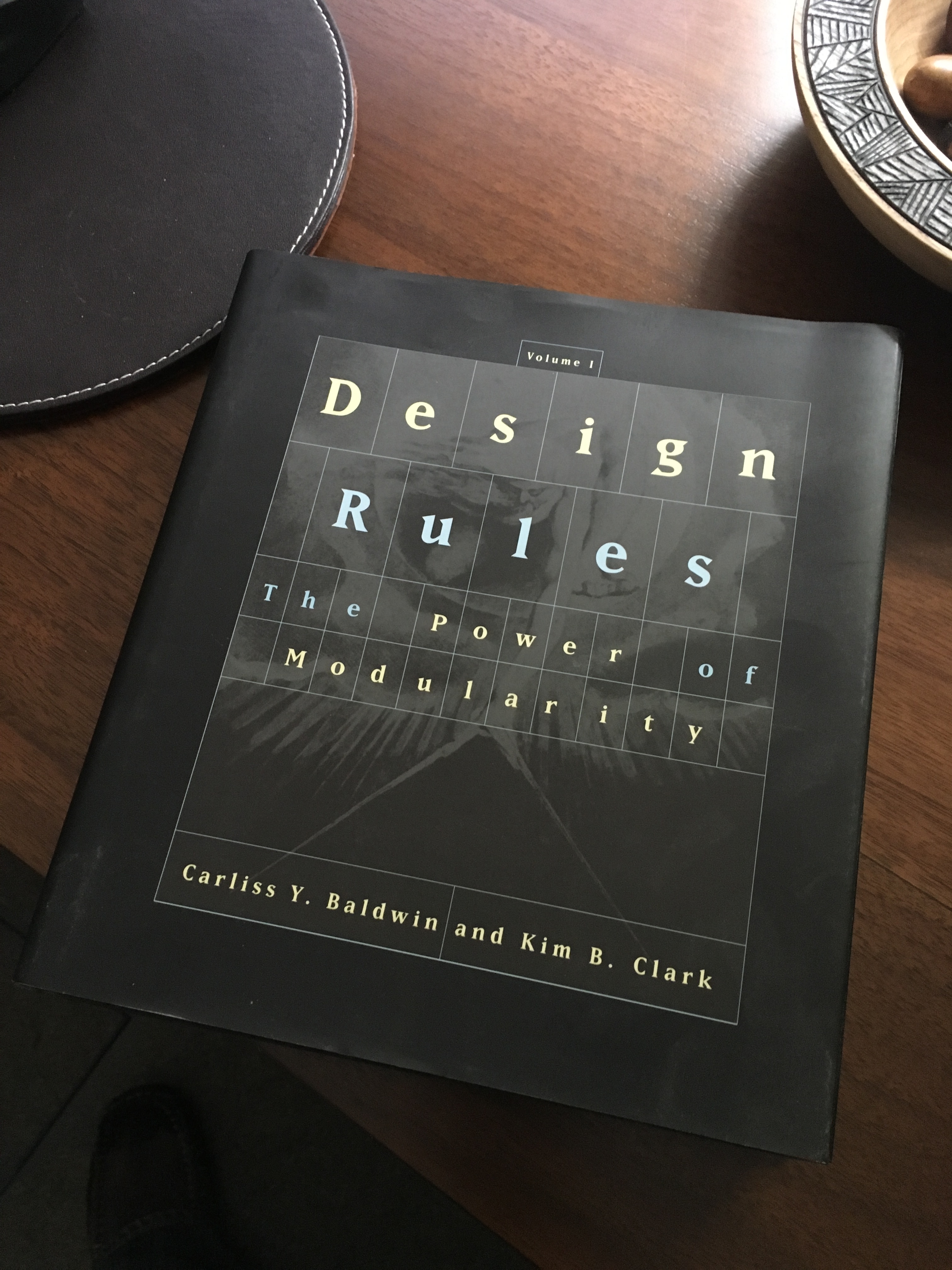 Around that time I was leading the AspectJ project and studying anything I could get my hands on that related to software modularity (AOP is all about modular expression of cross-cutting concerns, but that’s a story for another day…). It’s over a decade since I went back to that book, and it’s a good reminder for me to go and mine its contents once more. Here’s an extract from the blurb:

[Baldwin and Clark] argue that the (computer) industry has experienced previously unimaginable levels of growth because it embraced the concepts of modularity, building complex products from smaller subsystems that can be designed independently yet function together as a whole. Modularity freed designers to experiment with different approaches, as long as they obeyed the established design rules. Drawing upon the literatures of industrial organization, real options, and computer architecture, the authors provide insight into the forces of change that drive today’s economy.

Does that sound like it might be relevant to any architectural trends you can think of at the moment ? 😉

Thus understanding error-prone DRSpaces within your code base can point you to areas that will give a very high payoff if they are refactored to remove design flaws.

Design rule spaces and how to find them

The types of relations explored in the paper are inheritance/realization, aggregation, and dependency. The authors also study one evolutionary relation, evolutionary coupling, which is derived from change history. This captures files that commonly change together.

A design structure matrix (DSM) can be constructed using one (or more) of these relations to reveal structure in the program. A DSM is a square matrix with each type (or file) represented in the same order in both the rows and the columns. A cell on the diagonal therefore represents a self-dependency, and shaded cells off the diagonal capture a relationship between the element on the row and the element on the column. As an easy example, here’s a DSM that simply considers two types to be related if they are in the same package: 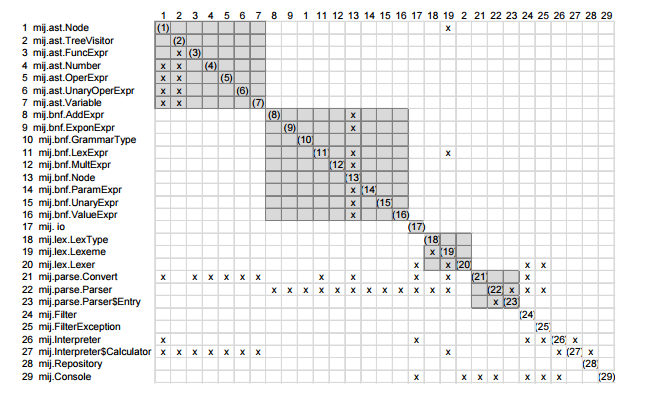 Here’s an example with two layers, indicated by the outlined boxes, formed by analysing the aggregation relationship between types:

There are two layers in this DRSpace. The first layer, l1:(rc1-5), contains four modules of leading classes, and the second layer contains three meaningful modules. For example, m1:(rc8-9) is a MemoryBuffer module that contains two classes using it; m2:(rc10-13) groups major components such as parser and lexer together because they all communicate through pipes, and thus aggregate, mij.io.InputPipe and mij.io.OutputPipe.

For the same example program, here’s a DRSpace constructed around the dependency relation – it reveals how classes work together to accomplish a function: 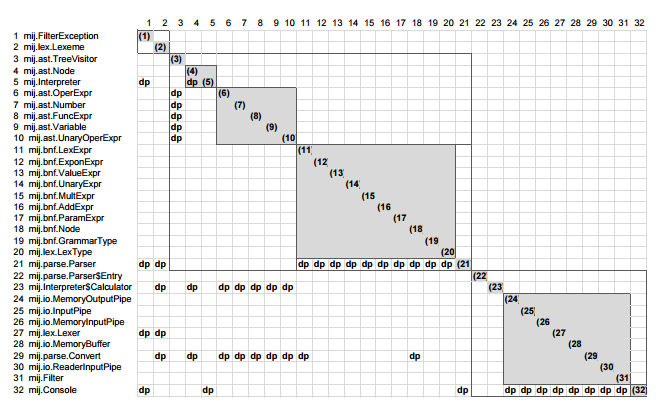 The ArchDRH algorithm supports architecture recovery from source code (details of which are described in a separate paper). It also includes support for control programs such a a class with a main function, which usually depend on many other classes but is not depended on by them. ArchDRH separates such control elements into the bottom of a module and supports recursively clustering the rest of a module into a DRH structure.

The relationship between design rule spaces and bugs

The authors studied one target release each from JBoss AS, Hadoop Common, and Eclipse JDT, being careful to pick a release with at least 10 prior releases before it so that history DSMs (evolutionary coupling relationship) and error prone files could be identified (via issue trackers).

For each of the 30 most error-prone files in each project (those most often involved in bug fixes) the authors used their tool to find its DRSpace, and ranked the size of the DRSpace to find the top DRSpaces with at least 10 files in them. In JBoss, 9 of the 30 most error-prone files lead a DRSpace with at least 10 files, and for Hadoop Common and Eclipse JDT 11 of the files lead such a DRSpace.

The analysis shows that if a file is error-prone and leading a highly coupled DRSpace, then a significant portion of the DRSpace is also error-prone. “We thus call a DRSpace led by an error-prone file an error-prone DRSpace.”

A project may have hundreds of error-prone files. Can they be captured by a much smaller number of DRSpaces led by error-prone design rules?

The answer turns out to be that error-prone files are concentrated in just a few DRSpaces. For each project, the top 5 error-prone DRSpaces account for between 52% and 89% of the files within a bug space. (A bug space, bugN for some N, is the collection of files each of which has had at least N bugs in it. The authors study bug2, bug5, and bug10). In the JBoss project as an example, the first 15 DRSpaces cover 66% of Bug2, the first 9 DRSpaces cover 57% of Bug5, and the first 3 DRSpaces cover 78% of Bug10.

The results reported in the previous sections imply that large numbers of error-prone files belong to the same few DRSpaces. The question is whether these DRSpaces can provide insights into the reasons why these files are error-prone.

After studying all of the error-prone DRSpaces of each project, the authors observed that they often exhibit one of the following two problems:

For example, FSNamesystem has 190 bug fixes and is ranked as the number 1 most error-prone file in Hadoop Common. “From its DRSpace with 17 files, we can see that FSNamesystem is involved in a dependency cycle with 11 files, and an aggregation cycle with 7 elements.”

Consider Hadoop’s JobTracker as an example of problematic inheritance hierarchies:

In its inheritance DRSpace, after choosing dependency and aggregation as secondary relations, we saw that JobTracker depends on conf.Configuration, and aggregates mapred.JobConf, which, in turn, is a child of conf.Configuration. Both of mapred.JobConf and conf.Configuration are highly buggy, ranking 21st and 26th respectively. They both lead large error-prone DRSpaces, with 76 and 54 files respectively. Since JobTracker either depends on or aggregates them, it is not surprising that it is the most error-prone file of the entire project.

(Note: FSNamesystem and JobTracker can’t both be the most error-prone file in the project, but I get the general idea…).

The analysis also revealed the presence of implied ‘shared secrets’ between files were there were large numbers of co-changes but neither structural relations between them nor obvious structural problems.