This paper sheds light on the gap between research results in time series classification, and what you’re likely to see if you try to apply the results in the real world. And having identified the gap of course, the authors go on to greatly reduce it…

In virtually all time series classification research, long time series are processed into short equal-length “template” sequences that are representative of the class… [and researchers work with] perfectly aligned data, containing all of the target behavior and only the target behavior. Unsurprisingly, dozens of papers report less than 10% classification eror rate on this problem. However, does such an error rate reflect our abilities with real-world data? … We believe that such contriving of the data has led to unwarranted optimism about how well we can classify real-time series data streams. For real-world problems, we cannot always expect the training data to be so idealized, and we certainly cannot expect the testing data to be so perfect.

Three assumptions (or at least one of these three assumptions) underpin much of the progress in time series classification in the decade preceding this paper:

To simplify things for a moment consider a toy example in a small discrete domain (the real goal is large real-valued time series data). We have gait data, and we want to classify it as ‘walk’, ‘run’, or ‘sprint’. The patterns are going to need to be the same length, so let’s actually look for ‘walk’, ‘rrun’, and ‘sprt.’ Every item would need to belong to exactly one of these classes, so fast walking is probably ok, but jogging would be right out. And finally we assume copious amounts of perfectly aligned atomic patterns, so we want training data that looks something like this:

In the real-world, we tend to have weakly-labelled time series annotated by behaviour or some other mapping to the ground truth. “By weakly-labelled, we simply mean that each long data sequence has a single global label and not lots of local labelled pointers to every beginning and ending of individual patterns, e.g. individual gestures.” Such data has two important properties:

The following ECG trace exhibits both of these properties: 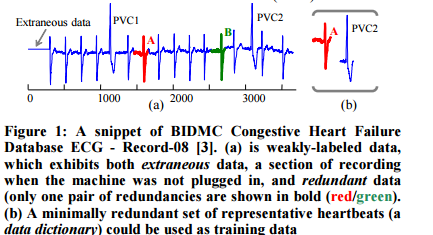 The authors develop a technique by which a real world time series can be preprocessed to eliminate extraneous sections and redundancy – without requiring human intervention to edit the time series by hand. The ideal training set would contain no spurious data, and exactly one instance of each of the ways the target behaviour is manifest. This idealised training set is called a data dictionary.

Given a data dictionary, a classifier can determine the class membership of a query using a straightforward nearest neighbour approach and a threshold:

Best results are achieved using a Uniform Scaling distance rather than a Euclidean distance. 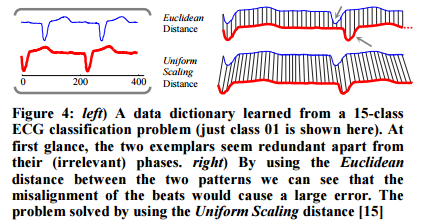 We have found that using the Uniform Scaling distance allows us to have a significantly smaller data dictionary… beyond reducing the size of data dictionaries (thus speeding up classification), there is an additional advantage of using Uniform Scaling; it allows us to achieve a lower error rate. How is this possible? It is possible because we can generalize to patterns not seen in the training data.

The classification errors are reduced because the data dictionary contains less spurious, and therefore potentially misleading, data. And the redundancy in most time series means that in most real-world problems the data dictionary can be aronud 5% of the size of the full training data, and still be at least as accurate as approaches that use all of it.

With less than one tenth of the original data kept in [the data dictionary], we are at least ten times faster at classification time.

Better, faster, cheaper classification that works with real-world data sets sounds pretty attractive. So let’s take a look at how to build a data dictionary…

Let’s continue with the easier to understand discrete domain example. In the paper, the authors describe a training dataset in which we wish to distinguish between two classes, C1 and C2. We have weakly labeled data for each class:

The data dictionary D should be the following:

r is the rejection threshold distance – in this case we consider a subsequence to be a class match if it is within (hamming) distance of 1. So an incoming query of ieap would be matched as class C2, but a query of kklp would be rejected. The second example is especially interesting, because it actually appears in C1 ‘by accident’ which could have led to a misclassification if using the full training dataset.

This misclassification is clearly contrived, but it does happen frequently in the real data… In our example we have considered two separate queries; however a closer analogue of our real-valued problem is to imagine an endless stream that needs to be classified: …ttgpacedgrteweerjumpwalkflqrafertwqhafhfahfahfbseew…

The creation of the data dictionary is based on ranking and scoring candidate substrings using leaving-one-out classification.

For example, by using leaving-one-out to classify the first substring of length 4 in C1 dpac, it is incorrectly classified as C2 (it maches the middle of ..umpacgd.. with a distance of 1). In contrast, when we attempt to classify the second substring of length 4 in C1, pace, we find it is correctly classified. By collecting statistics about which substrings are often used for correct predictions, but rarely used for wrong predictions, we find that the four substrings shown in our data dictionary emerge as the obvious choices. This basic idea is known as data editing.

The algorithm proceeds iteratively, in each iteration:

To reduce sensitivity to misalignments the chosen subsequence (in step 2) is padded with extra points from the left and the right. For query length l, l/2 data points are used on each side.

Given the two histograms, we choose the location that gives the equal-error-rate as the threshold. However, based on their tolerance to false negatives, users may choose a more liberal or conservative decision boundary.