This is the first in a series of papers from EuroSys 2016. There are three strands here: first of all, there’s some great background into how scheduling works in the Linux kernel; secondly, there’s a story about Software Aging and how changing requirements and maintenance can cause decay; and finally, the authors expose four bugs in Linux scheduling that caused cores to remain idle even when there was pressing work waiting to be scheduled. Hence the paper title, “A Decade of Wasted Cores.”

In our experiments, these performance bugs caused many-fold performance degradation for synchronization-heavy scientific applications, 13% higher latency for kernel make, and a 14-23% decrease in TPC-H throughput for a widely used commercial database.

The evolution of scheduling in Linux

By and large, by the year 2000, operating systems designers considered scheduling to be a solved problem… (the) year 2004 brought an end to Dennard scaling, ushered in the multicore era and made energy efficiency a top concern in the design of computer systems. These events once again made schedulers interesting, but at the same time increasingly more complicated and often broken.

Linux uses a Completely Fair Scheduling (CFS) algorithm, which is an implementation of weighted fair queueing (WFQ). Imagine a single CPU system to start with: CFS time-slices the CPU among running threads. There is a fixed time interval during which each thread in the system must run at least once. This interval is divided into timeslices that are allocated to threads according to their weights.

A thread’s weight is essentially its priority, or niceness in UNIX parlance. Threads with lower niceness have higher weights and vice versa.

A running thread accumulates vruntime (runtime / weight). When a thread’s vruntime exceeds its assigned timeslice it will be pre-empted.

Threads are organized in a runqueue, implemented as a red-black tree, in which the threads are sorted in the increasing order of their vruntime. When a CPU looks for a new thread to run it picks the leftmost node in the red-black tree, which contains the thread with the smallest vruntime.

So far so good, but now we have to talk about multi-core systems…

Firstly we need per-core runqueues so that context switches can be fast. Now we have a new problem of balancing work across multiple runqueues.

Consider a dual-core system with two runqueues that are not balanced.Suppose that one queue has one low-priority thread and another has ten high-priority threads. If each core looked for work only in its local runqueue, then high-priority threads would get a lot less CPU time than the low-priority thread, which is not what we want. We could have each core checknot only its runqueue but also the queues of other cores,but this would defeat the purpose of per-core runqueues. Therefore, what Linux and most other schedulers do is periodically run a load-balancing algorithm that will keep the queues roughly balanced.

Since load balancing is expensive the scheduler tries not to do it more often than is absolutely necessary. In addition to periodic load-balancing therefore, the scheduler can also trigger emergency load balancing when a core becomes idle. CFS balances runqueues not just based on weights , but on a metric called load, which is the combination of the thread’s weight and its average CPU utilization. To account for bias that could occur when one process has lots of threads and another has few threads, is version 2.6.38 Linux added a group scheduling (cgroup) feature.

When a thread belongs to a cgroup, its load is further divided by the total number of threads in its cgroup. This feature was later extended to automatically assign processes that belong to different ttys to different cgroups (autogroup feature).

So can we just compare the load of all the cores and transfer tasks from the most loaded to least loaded core? Unfortunately not! This would result in threads being migrated without considering cache locality or NUMA. So the load balancer uses a hierarchical strategy. Each level of the hierarchy is called a scheduling domain. At the bottom level are single cores, groupings in higher levels depend on how the machine’s physical resources are shared. 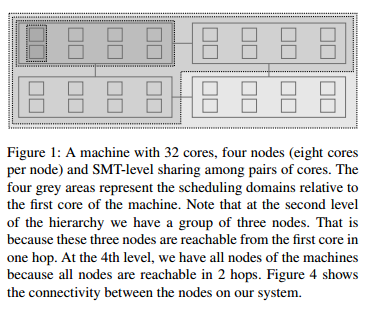 The scheduler prevents duplicating work by running the load-balancing algorithm only on the designated core for the given scheduling domain. This is the lowest numbered core in a domain if all cores are busy, or the lowest numbered idle core if one or more cores are idle. If idle cores are sleeping (power management) then the only way for them to get work is to be awoken by another core. If a core thinks it is overloaded it checks whether there have been tickless idle cores in the system for some time, and if so it wakes up the first one and asks it to run the periodic load balancing routine on behalf of itself and all of the other tickless idle cores.

With so many rules about when the load balancing doesor does not occur, it becomes difficult to reason about how long an idle core would remain idle if there is work to do and how long a task might stay in a runqueue waiting for its turn to run when there are idle cores in the system.

The four bugs that the authors found are the group imbalance bug, the scheduling group construction bug, the overload on wakeup bug, and the missing scheduling domains bug.

Oh, the joy of averages for understanding load. I believe Gil Tene has a thing or two to say about that :).

When a core attempts to steal work from another node, or, in other words, from another scheduling group, it does not examine the load of every core in that group, it only looks at the group’s average load. If the average load of the victim scheduling group is greater than that of its own, it will attempt to steal from that group; otherwise it will not. This is the exact reason why in our situation the underloaded cores fail to steal from the overloaded cores on other nodes. They observe that the average load of the victim node’s scheduling group is not any greater than their own. The core trying to steal work runs on the same node as the high-load R thread; that thread skews up the average load for that node and conceals the fact that some cores are actually idle. At the same time, cores on the victim node, with roughly the same average load, have lots of waiting threads.

The Linux taskset command pins applications to run on a subset of the available cores. When an application is pinned on nodes that are two hops apart, a bug prevented the load balancing algorithm from migrating threads between them.

The result is that nodes can be included in multiple scheduling groups. Suppose Nodes 1 and 2 both end up in two groups…

Suppose that an application is pinned on Nodes 1 and 2 and that all of its threads are being created on Node 1 (Linux spawns threads on the same core as their parent thread; when an application spawns multiple threads during its initialization phase, they are likely to be created on the same core – so this is what typically happens). Eventually we would like the load to be balanced between Nodes 1 and 2. However, when a core on Node 2 looks for work to steal,it will compare the load between the two scheduling groups shown earlier. Since each scheduling group contains both Nodes 1 and 2, the average loads will be the same, so Node2 will not steal any work!

The fix is to change the construction of scheduling groups. Across a range of applications, this results in speed-ups ranging from 1.3x to 27x.

When a thread goes to sleep on Node X and the thread that wakes it up later is running on that same node, the scheduler only considers the cores of Node X for scheduling the awakened thread. If all cores of Node X are busy, the thread will wake up on an already busy core and miss opportunities to use idle cores on other nodes. This can lead to a significant under-utilization of the machine, especially on workloads where threads frequently wait.

The original rationale for the behaviour was to maximise cache reuse – but for some applications waiting in the runqueue for the sake of better cache reuse does not pay off. The bug was triggered by a widely used commercial database configured with 64 worker threads.

The final bug seems to been inadvertently introduced during maintenance.

Before the fix, disabling and then re-enabling one core in the system could cause all threads of an application to run on a single core instead of eight. Unsurprisingly, the system performs much better (up to 138x better in one case!) with the fix.

… new scheduler designs come and go. However, a new design, even if clean and purportedly bug-free initially, is not a long-term solution. Linux is a large open-source system developed by dozens of contributors. In this environment, we will inevitably see new features and ‘hacks’ retrofitted into the source base to address evolving hardware and applications.

Is improved modularity the answer?

We now understand that rapid evolution of hardware that we are witnessing today will motivate more and more scheduler optimizations. The scheduler must be able to easily integrate them, and have a way of reasoning about how to combine them. We envision a scheduler that is a collection of modules: the core module, and optimization modules…

Catching the kind of bugs described in this paper with conventional tools is tricky – there are no crashes or out-of-memory conditions, and the lost short-term idle periods cannot be noticed with tools such as htop, sar, or perf.

Our experience motivated us to build new tools, using which we could productively confirm the bugs and understand why they occur.

The first tool is described by the authors as a sanity checker. It verifies that no core is idle while another core’s runqueue has waiting threads. It allows such a condition to exist for a short period, but raises an alert if it persists. The second tool was a visualizer showing scheduling activity over time. This makes it possible to profile and plot the size of runqueues, the total load of runqueues, and the cores that were considered during periodic load balancing and thread wakeups.

Here’s an example of a visualization produced by the tool:

Scheduling, as in dividing CPU cycles among threads was thought to be a solved problem. We show that this is not the case. Catering to complexities of modern hardware, a simple scheduling policy resulted in a very complex bug-prone implementation. We discovered that the Linux scheduler violates a basic work-conserving invariant: scheduling waiting threads onto idle cores. As a result, runnable threads may be stuck in runqueues for seconds while there are idle cores in the system; application performance may degrade many-fold. The nature of these bugs makes it difficult to detect them with conventional tools. We fix these bugs, understand their root causes and present tools, which make catching and fixing these bugs substantially easier. Our fixes and tools will be available at http://git.io/vaGOW.