Maglev is Google’s software load balancer used within all their datacenters. It offers greater scalability and availability than hardware load balancers, enables quick iteration, and is much easier to upgrade. Maglev is a just another distributed system running on the commodity servers within a cluster. Maglev must provide an even distribution of traffic, connection persistence (packets belonging to the same connection should always be directed to the same service endpoint), and high throughput with small packets. The first of these requirements is satisfied through the use of Equal Cost Multipath (ECMP) forwarding. The latter two are satisfied through a combination of consistent hashing and connection tracking.

Every Google service has one or more Virtual IP addresses (VIPs). A VIP is different from a physical IP in that it is not assigned to a specific network interface, but rather served by multiple service endpoints behind Maglev. Maglev associates each VIP with a set of service endpoints and announces it to the router over BGP; the router in turn announces the VIP to Google’s backbone. Aggregations of the VIP networks are announced to the Internet to make them globally accessible. Maglev handles both IPv4 and IPv6 traffic, and all the discussion below applies equally to both…

Google’s DNS servers assign users to nearby frontend locations taking into account both the user’s geolocation and also the current load at each location. DNS will return a VIP, and the user will then try to establish a connection with that VIP. A router inside of Google’s datacenter that receives a VIP packet forwards it to one of the Maglev machines in the cluster through ECMP (all Maglev machines announce the VIP with the same cost). The Maglev machine will select a backend endpoint and encapsulate the packet using GRE (Generic Routing Encapsulation) – it is unpacked and consumed at the backend service.

The response, when ready, is put into an IP packet with the source address being the VIP and the destination address being the IP of the user. We use Direct Server Return (DSR) to send responses directly to the router so that Maglev does not need to handle returning packets, which are typically larger in size.

Every Maglev machines contains a controller and a forwarder. The controller monitors the health of the forwarder and decides whether to announce or withdraw all the VIPs via BGP. The forwarder does all the heavy lifting.

A forwarder’s config manager learns the VIPs to be served from configuration objects – either read from files or received via RPCs. All config updates are committed atomically. 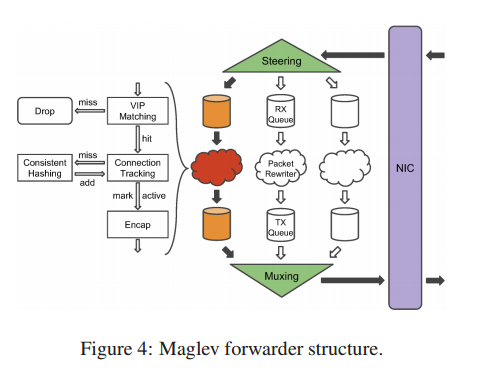 The forwarder receives packets directly from the NIC, rewrites them with GRE/IP headers, and sends them back to the NIC. The Linux kernel is completely bypassed.

Packets from the NIC are processed by the steering module which assigns them to one of a number of packet receiving queues using a hash function. Each queue is serviced by a dedicated thread which is pinned to a dedicated CPU core. These packet rewriter threads recompute the hash of the packet (the previous hash is not reused in order to avoid cross-thread synchronization) and look up the hash value in a connection tracking table. If a match is found and the backend is still healthy then the result is reused. Otherwise the thread consults the consistent hashing module to select a new backend for the packet, and adds a new entry to the connection tracking table. Each thread has its own connection tracking table to avoid contention. Once a backend has been selected, the packet is encapsulated with the appropriate GRE/IP headers and sent to the thread’s transmission queue. The muxing module polls all transmissions queues and passes the packets back to the NIC.

The steering module performs 5-tuple hashing instead of round-robin scheduling for two reasons. First, it helps lower the probability of packet reordering within a connection caused by varying processing speed of different packet threads. Second, with connection tracking, the forwarder only needs to perform backend selection once for each connection, saving clock cycles and eliminating the possibility of differing backend selection results caused by race conditions with backend health updates. In the rare cases where a given receiving queue fills up, the steering module falls back to round-robin scheduling and spreads packets to other available queues. This fallback mechanism is especially effective at handling large floods of packets with the same 5-tuple

If a large datagram is split into two (or more) fragments (IP fragmentation) then only the first fragment contains all of the 5-tuple elements; subsequent fragments contain only the L3 header (3-tuple). Only a few VIPs are allowed to receive fragments, and they are handled by configuring all Maglevs with a special backend pool consisting of all Maglev machines in the cluster. A fragment is hashed using the 3-tuple and forwarded to a Maglev from the pool based on the hash value. Here a fragment table is kept which records forwarding decisions for first-fragments so that subsequent fragments can be sent to the same destination.

For efficient communication between Maglev and the NIC, Maglev pre-allocates a packet pool shared between the NIC and the forwarder on start-up. The steering and muxing modules maintain a ring queue of pointers to packets in the packet pool. 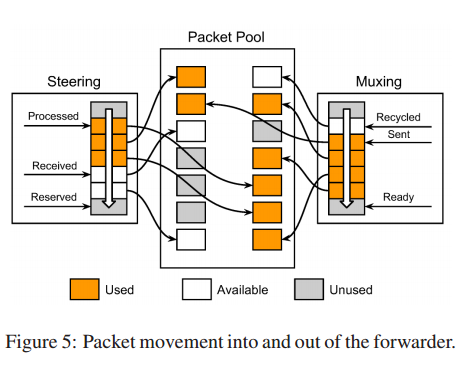 Normally it takes the packet thread about 350ns to process each packet on Google’s standard servers. With a packet pool size of 3000 and a forwarder processing 10M packets per second, it takes about 300µs to process all buffered packets.

For connection-oriented protocols such as TCP, we need to send all the packets of a connection to the same backend. Under normal circumstances the connection tracking table takes care of this – but we still need to assign a backend in the case that the table has no entry, and since tables are not shared across threads, let alone Maglev instances, things like rolling upgrades of Maglev clusters can lead to connections switching between Maglev instances.

In fact, Maglev aims for ‘minimal disruption’ rather than an absolute guarantee. A small number of disruptions is tolerable by Maglev. Thus Maglev’s scheme aims for:

At the core of the approach is a lookup table…

Let N be the size of a VIP’s backend pool. A table is constructed with M entries, where M is a prime number and M > 100 * N, which will ensure at most a 1% difference in hash space assigned to backends.

Suppose M is 7, and for a given backend i offset = 3 and skip = 4. We would generate the random permutation for this backend as follows:

Once we have permutations for all i backends, we fill in the lookup table M by allowing each backend to pick a slot in turns until all the slots are filled (a bit like captains picking players for a school sports team). When a backend gets to pick a slot, it works through its permutation list, and chooses the first slot in M from that list which is not already taken. 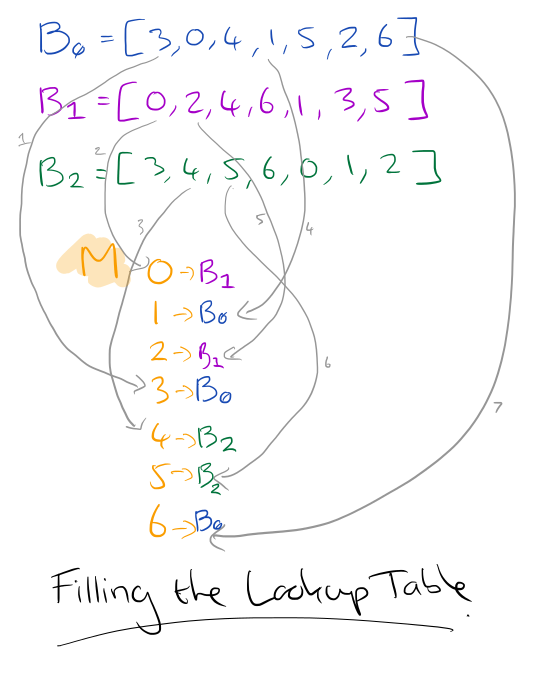 The reason for going to these lengths is the relative stability of the mappings when a backend node is added or removed. Consider what happens if B1 is removed from the lookup table in our previous scenario and we rebuild the lookup table: 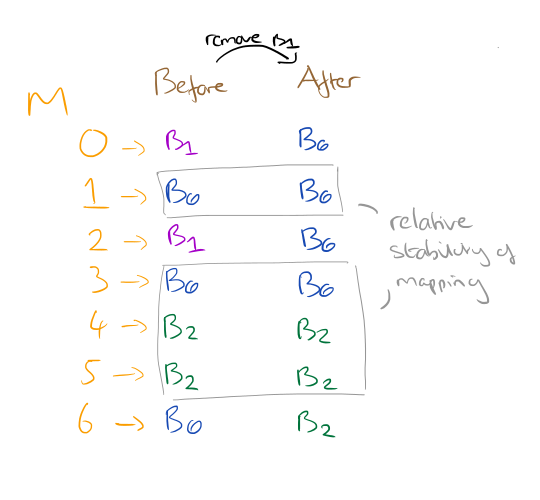 We built Maglev to scale out via ECMP and to reliably serve at 10Gbps line rate on each machine, for cost-effective performance with rapidly increasing serving demands. We map connections consistently to the same backends with a combination of connection tracking and Maglev hashing. Running this software system at scale has let us operate our websites effectively for many years, reacting quickly to increased demand and new feature needs.