All File Systems are Not Created Equal: On the Complexity of Crafting Crash Consistent Applications – Pillai et al. 2014

Last week we looked at Reducing Crash Recoverability to Reachability for file system-based applications. Today’s choice predates that work and investigates the semantics of real world file systems and how this affects applications that run on top of them. It’s a real eye-opener, and essential reading if you’re building (or operating!) anything that you expect to be able to recover from crashes and that interacts with a file system. The bottom line: there are lots of vulnerabilities out there, and an application that works correctly with one file system may not do so with another one.

Many important applications, including databases such as SQLite and key-value stores such as LevelDB, are currently implemented on top of (these) file systems instead of directly on raw disks. Such data management applications must also be crash consistent, but achieving this goal atop modern file systems is challenging for two fundamental reasons…

BOB, the Block Order Breaker, is used to find out what behaviours are exhibited by a number of modern file systems that are relevant to building crash consistent applications. ALICE, the Application Level Intelligent Crash Explorer is then used to explore the crash recovery behaviour of a number of applications on top of these file systems.

BOB explores the persistence properties of modern file systems. In particular it examines atomicity – does the update arising from a system call happen all at once – and ordering – can system calls be reordered? Consider this program fragment:

All sorts of fun things might happen in the event of a crash. If the write operation is not atomic for example the file size could be updated but the content might not be written (file contains garbage), or just one “p” might be written into f1. Or if the calls are persisted out of order, f2 might contain “qq”, but f1 might not contain “pp”. Any combination of these is possible.

Ext2, ext3, ext4, xfs, btrfs, and reiserfs are studied with a variety of configurations (16 in total).

BOB collects the block I/O generated by the workload, and then re-orders the collected blocks, selectively writing some of them to disk to generate a new legal disk state (disk barriers are obeyed). In this manner, BOB generates a number of unique disk images corresponding to possible on-disk states after a system crash. BOB then runs file-system recovery on each resulting disk image, and checks whether various persistence properties hold (e.g., if writes were atomic).

BOB can find failures but can’t prove their absence. Here’s what BOB finds for the configurations under test – an x indicates that the property does not hold for the file system in question. 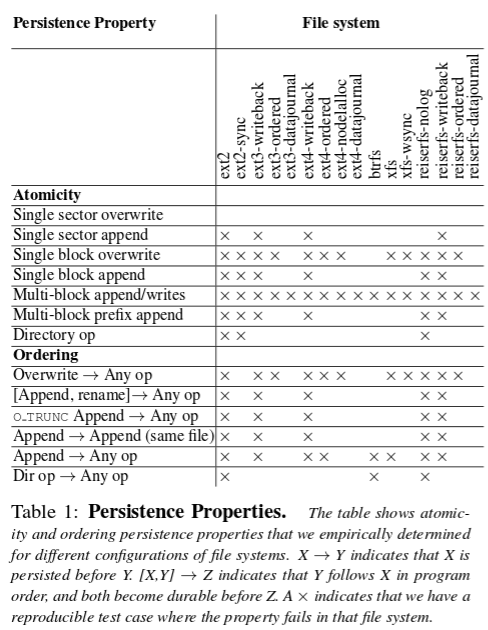 From Table 1, we observe that persistence properties vary widely among file systems, and even among different configurations of the same file system. The order of persistence of system calls depends upon small details like whether the calls are to the same file or whether the file was renamed. From the viewpoint of an application developer, it is risky to assume that any particular property will be supported by all file systems. (emphasis mine).

ALICE finds the generic persistence properties required for an application to behave correctly . It does this by constructing file system states directly from the system call trace of an application workload.

The user first supplies ALICE with an initial snapshot of the files used by the application (typically an entire directory), and a workload script that exercises the application (such as performing a transaction). The user also supplies a checker script corresponding to the workload that verifies whether invariants of the workload are maintained (such as atomicity of the transaction). ALICE runs the checker atop different crash states, i.e., the state of files after rebooting from a system crash that can occur during the workload. ALICE produces a logical representation of the update protocol executed during the workload, vulnerabilities in the protocol and their associated source lines, and persistence properties required for correctness.

ALICE selects different sets of the translated micro-ops that obey the ordering constraints. A new crash state is constructed by sequentially applying the micro-ops in a selected set to the initial state (represented as logical entities). For each crash state, ALICE then converts the logical entities back into actual files, and supplies them to the checker. The user-supplied checker thus verifies the crash state.

34 different configuration options were tested across the 11 applications listed earlier. 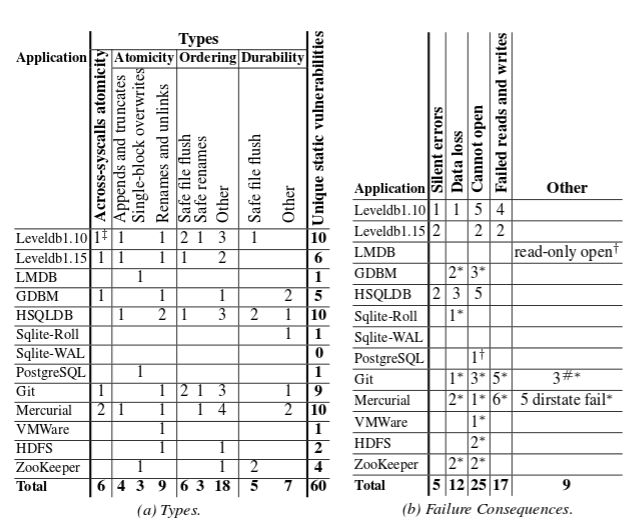 We find many vulnerabilities have severe consequences such as silent errors or data loss. Seven applications are affected by data loss, while two (both LevelDB versions and HSQLDB) are affected by silent errors. The cannot open failures include failure to start the server in HDFS and ZooKeeper, while the failed reads and writes include basic commands (e.g., git-log, git-commit) failing in Git and Mercurial. A few cannot open failures and failed reads and writes might be solvable by application experts, but we believe lay users would have difficulty recovering from such failures (our checkers invoke standard recovery techniques).

Four applications require atomicity across system calls, and three require appends to be content-atomic: the appended portion should contain actual data. LMDB, PostgreSQL and ZooKeeper require small writes ( Applications are extremely vulnerable to system calls being persisted out of order; we find 27 vulnerabilities.

A common heuristic to prevent data loss on file systems with delayed allocation is to persist all data of a file before subsequently renaming – the bad news is that this tactic only fixes a small minority (3) of vulnerabilities.

The vulnerabilities exposed vary based on the file system, and thus testing applications on only a few file systems does not work.