In case you find all these various permutations of non-volatile memory / storage confusing (I do!), then this might help:

Emerging byte-addressable NVMs are further accelerating the architectural change
in transaction design. Transaction designs can be classiﬁed into three categories
when NVMs are used differently in a storage system:

We’re dealing with the third category in this paper.

The storage consistency overhead is even higher with persistent memory – the CPU cache is hardware controlled and keeping track of all pages in software is cumbersome. An alternative is to always flush the whole cache using e.g. the clflush and mfence commands. In either case, since storage consistency requires frequent persistence operations, performance is significantly degraded.

One option is to improve hardware support. While researching this topic, I found myself looking at the 1200 page Intel Architecture Instruction Set Extensions Programming Reference manual. And lo and behold, chapter 10 covers “new instructions for future Intel processor generations that provide enhancements in application memory operation and the use of persistent memory.” There you’ll find this:

For performance reasons, accesses to persistent memory may be cached by the processor caches. While caches significantly improve memory access latencies and processor performance, caching requires software to ensure data from stores is indeed flushed from the volatile caches (written back to memory), as part of making it persistent. New optimized cache flush instructions that avoid the performance limitations of CLFLUSH are introduced. Section 10.4 provides the details of the CLFLUSHOPT and CLWB instructions. CLFLUSHOPT is defined to provide efficient cache flushing. The CLWB instruction (Cache Line Write Back) writes back modified data of a cacheline similar to CLFLUSHOPT, but avoids invalidating the line from the cache (and instead transitions the line to non-modified state). CLWB attempts to minimize the compulsory cache miss if the same data is accessed temporally after the line is flushed.

Blurred persistence does not presume the existence of this hardware support, and looks at what we can do in software with existing hardware. It is based on two observations:

Based on these observations, Blurred Persistence introduces two mechanisms described as Execution in Log (XIL) and Volatile Checkpoint with Bulk Persistence (VCBP). It’s possible to use these together or individually (and the evaluation section discusses conditions when you might want to use just one or the other).

First, Execution in Log (XIL) allows transactions to be executed in the log area and removes duplicated copies in the execution area. Volatile data are allowed to be persisted in the log area. To enable this, XIL reorganizes the log structure to make the uncommitted data detectable in the log. During recovery, the detected uncommitted data can be cleaned from the log while leaving only committed transactions. Second, Volatile Checkpoint with Bulk Persistence (VCBP) allows delayed persistence of committed transaction data in each transaction execution and avoids the tracking of to-be-persisted data. This is achieved by making the corresponding log data persistent and maintaining the commit order of checkpointed data across threads. It also aggressively ﬂushes all data blocks from the CPU cache to memory using bulk persistence, with the reorganized memory areas and structures. By doing so, VCBP enables more cache evictions and less forced writebacks, thus improves cache efﬁciency. 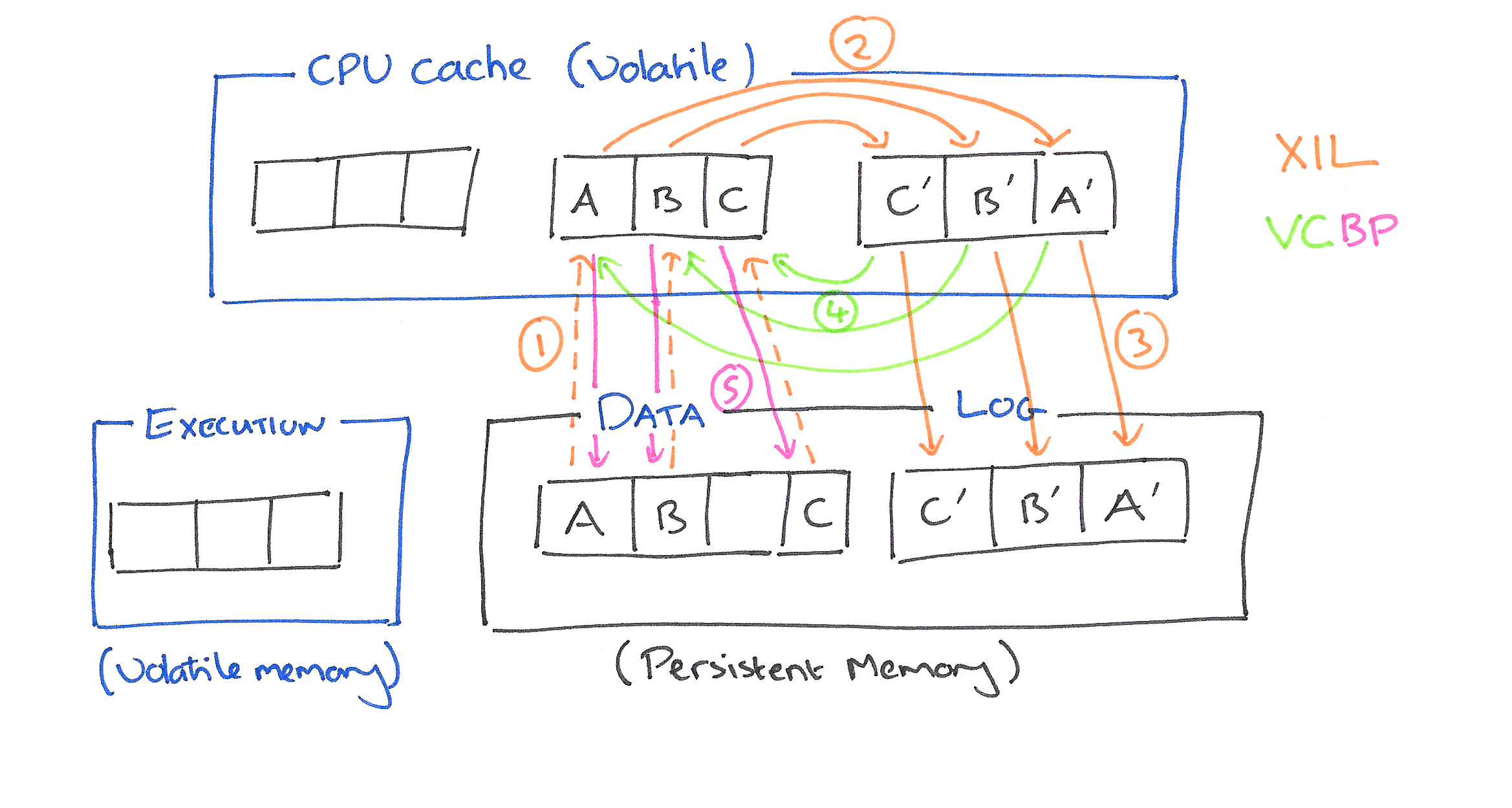 ‘Conventional’ approaches to transaction support in persistent memory divide the memory into distinct areas: a data area where the committed, persistent data is kept; a log area; and an execution area (this plays the role of ‘memory’ in a traditional disk-based TP architecture).

During transaction execution, data are read from the data area and copied to the execution area. When the transaction is committing the to-be-persisted data is recorded in the log area. Once the log blocks have been persisted, the committed data are checkpointed to the data area. Thus there is a lot of copying and overhead.

XIL breaks this limitation by:

To make the uncommitted data detectable in persistent main memory, XIL reorganizes the log structure: (1) Data blocks in the log area are allocated in a log-structured way. Each block has a unique address. With the determined address, an uncommitted block is written to its own location. It neither overwrites any other block nor is overwritten. (2) Uncommitted data blocks are identiﬁed using their transaction status metadata in the log, which has associated metadata to indicate the transaction status. For each transaction, there is a block to record these metadata, i.e., a commit record for a committed transaction and an abort record for an aborted transaction. During the normal execution, when a transaction is aborted, its volatile data blocks are discarded without being written back to the persistent main memory. This leads to log holes in the log area (i.e., the log blocks that have been allocated but not written to). Log holes are those blocks allocated for uncommitted transactions, but have no data written to.

During recovery XIL needs to correctly process logs with log holes. Hole-blocks are detectable using the ‘torn-bit’ technique from Mnemosyne which uses one bit in each data block to indicate the status. Uncommitted data blocks that have already been written are detectable using a back-pointer technique reminiscent of compensation log-records in ARIES, in which each abort record contains a back-pointer to the commit record of the last committed transaction. To find valid log blocks that follow a hole, XIL guarantees that one abort record is written for at least every 64 blocks of an aborted transaction. During recovery, if an unwritten block is encountered the recovery manager scans ahead by 64 blocks, and if no abort record is encountered then it knows the end of the log must have been reached.

Since this write-up is already getting quite long, I’ll refer you to the paper for full details on this.

There’s an interesting passage in the paper on the relationship of Buffered Persistence to the No-Force/Steal policies in ARIES:

Because the details of the situations are different, the view of the authors is that XIL and VCBP are not Steal and No-Force policies:

A 56.3% to 143.7% improvement in system performance across a variety of workloads (random swaps of array entries; hash tables; red-black trees; B+ trees; key-value operations in Tokyo-Cabinet).