The way you design your interface (API) has a significant impact on the scalability you can achieve with any implementation. Clements et al. define the Scalable Commutativity Rule – which will look familiar to those who study distributed systems – and a tool called COMMUTER, which together can guide your API design. Using these techniques they were able to redesign 18 file-system related POSIX calls and greatly increase scalability. Two aspects I really like in this work are (a) the focus on the impact of your API design on ultimate scalability (vs. implementation optimisations and techniques), and (b) the notion that while not all operations may commute all of the time, there can be significant regions in the execution history where they can. This is useful information we can exploit…

If all this sounds interesting, I highly recommend reading the full paper. My copy is extensively highlighted and I can only give you a flavour here.

At the core of our approach is this scalable commutativity rule: In any situation where several operations commute—meaning there’s no way to distinguish their execution order using the interface—they have an implementation whose memory accesses are conflict-free during those operations. Or, more concisely, whenever interface operations commute, they can be implemented in a way that scales.

The COMMUTER tool takes an interface model, and determines the precise conditions under which sets of operations commute. “The tool can be integrated into the development process to drive initial design and implementation, to incrementally improve existing implementations, or to help developers understand the commutativity of an interface.”

To reason about implementation scalability, we need to model implementations in enough detail to tell whether different threads’ “memory accesses” are conflict-free…conflict freedom is our proxy for scalability.

This requires just enough modelling of the state behind the interface to check for access conflicts. An important result of the formally defined scalable commutativity rule (see section 3.4) is that in a region of history which SIM commutes, there exists a correct implementation in that region whose steps are conflict free. You just have to find that implementation! The authors show one way of constructing it as a proof that it is always possible, but this is not recommended as an actual implementation technique.

We believe it is easier to create practical scalable implementations for operations that commute in more situations. The arguments and system states for which a set of operations commutes often collapse into fairly well-defined classes (e.g., file creation might commute whenever the containing directories are different). In practice, implementations scale for whole classes of states and arguments, not just for specific histories… In the end, a system designer must decide which situations involving commutative operations are most important, and find practical implementation strategies that scale in those situations.

The user expresses a symbolic model of the interface in Python, and the ANALYZER component of COMMUTER generates expressions in terms of arguments and state that indicate exactly when sets of operations commute. These expressions can be directly inspected, and also passed to TESTGEN which can convert these conditions into real test cases.

For a model of 18 POSIX system calls, TESTGEN produces a total of 13,664 test cases, and these find scalability issues in the Linux ramfs file system and virtual memory system.

MTRACE uses a modified version of qemu and guest Linux kernel to run the test cases generated by TESTGEN against a real implementation, and checks that the implementation is conflict-free in each case.

Applying COMMUTER in the design of a file system interface

The authors used COMMUTER to guide the design of a new file system called ScaleFS:

Figure 6 below shows the scalability of system call pairs as achieved by ramfs (left) and ScaleFS (right). A big reduction in the number of conflicting cases. 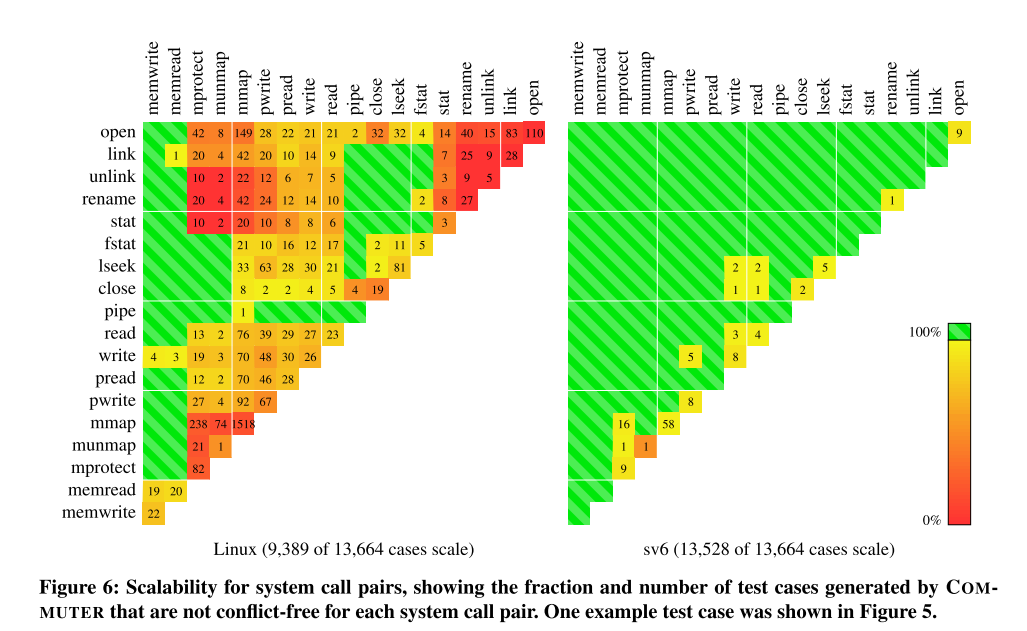 COMMUTER, sv6, and a browser for the data in this
paper are available at http://pdos.csail.mit.edu/commuter

Through the understanding gained from working with the COMMUTER tool, Clements et al. present us with four guidelines for designing commutative interfaces, and four patterns for designing scalable implementations…