This is part six of a ten-part series on consensus and replication.

This paper describes the atomic broadcast protocol that underpins Zookeeper. Rather than replicate operations as we’ve seen so far for Paxos and VR, Zab replicates state changes.

Critical to the design of Zab is the observation that each state change is incremental with respect to the previous state, so there is an implicit dependence on the order of the state changes. State changes consequently cannot be applied in any arbitrary order, and it is critical to guarantee that a prefix of the state changes generated by a given primary are delivered and applied to the service state.

It is important in our setting that we enable multiple outstanding ZooKeeper operations and that a prefix of operations submitted concurrently by a ZooKeeper client are committed according to FIFO order. Traditional protocols to implement replicated state machines, like Paxos, do not enable such a feature directly, however. If primaries propose transactions individually, then the order of learned transactions might not satisfy the order dependencies and consequently the sequence of learned transactions cannot be used unmodified. One known solution to this problem is batching multiple transactions into a single Paxos proposal and having at most one outstanding proposal at a time. Such a design affects either throughput or latency adversely depending on the choice of the batch size.

There follows an example in which three different proposers make proposals for three consecutive sequence numbers. The latter proposals are accepted, but the first fails to achieve a quorum and is later superceded by an alternate proposal. Due to the FIFO sequencing requirement (incremental state dependencies), this violates the Zookeeper requirement.

Now, Lamport himself in Paxos Made Simple states that a single distinguished proposer is required (so we don’t ordinarily have multiple proposers making proposals), and we know that this distinguished proposer (or a VR primary in VR) can sequence client transactions. Furthermore, Lamport also describes multiple rounds of Paxos executing simultaneously. If learners don’t apply an operation from their logs until all preceding operations have also been applied, this would seem on the surface to give us what Zab requires. And under normal operation I believe it would. So why then is Zab worried about “If primaries propose transactions individually…?” Not because they want to enable this for performance reasons, since Zab itself also uses a primary-backup model. The gap left by Paxos as I see it is therefore in the situation when the distinguished proposer fails with outstanding but unaccepted proposals. This can lead to gaps in the sequence, which a new distinguished proposer will fill with no-op operations.

… transactions sent by different primaries are not necessarily considered as causally related even if they are actually sent by the same process.

Now we’ve got the motivation out of the way, let’s take a look at how the core Zab protocol works. There are three phases: discovery, synchronization, and broadcast (normal operation). It’s the synchronization phase that makes Zab different:

To guarantee primary order despite primary crashes, Zab implements three phases. One particular phase critical to guarantee that the property is satisfied is synchronization. Upon a change of primary, a quorum of processes has to execute a synchronization phase before the new primary broadcasts new transactions. Executing this phase guarantees that all transactions broadcast in previous epochs that have been or will be chosen are in the initial history of transactions of the new epoch.

The paper contains an analysis of the correctness of the algorithm, and an evaluation of its implementation. Here I’m going to focus on the core protocol itself.

In addition, each process implements a leader oracle to determine which other processes it should follow (see for example the round-robin scheme of Viewstamped Replication Revisited for one way this could work). If the leader oracle of a process determines it is the leader, than that process executes the leader steps of the protocol – this is not enough to establish its leadership though, phase 2 (synchronization) does that.

A Zab process can be looking for a leader (ELECTION state), following (FOLLOWING state), or leading (LEADING state). When a process starts, it enters the ELECTION state. While in this state the process tries to elect a new leader or become a leader. If the process finds an elected leader, it moves to the FOLLOWING state and begins to follow the leader. Processes in the FOLLOWING state are followers. If the process is elected leader, it moves to the LEADING state and becomes the leader. Given that a process that leads also follows, states LEADING and FOLLOWING are not exclusive. A follower transitions to ELECTION if it detects that the leader has failed or relinquished leadership, while a leader transitions to ELECTION once it observes that it no longer has a quorum of followers supporting its leadership.

An iteration of the algorithm proceeds through all three phases. Note that Zab re-establishes TCP connections between processes with every iteration, thus ensuring messages from older iterations will no longer be delivered. 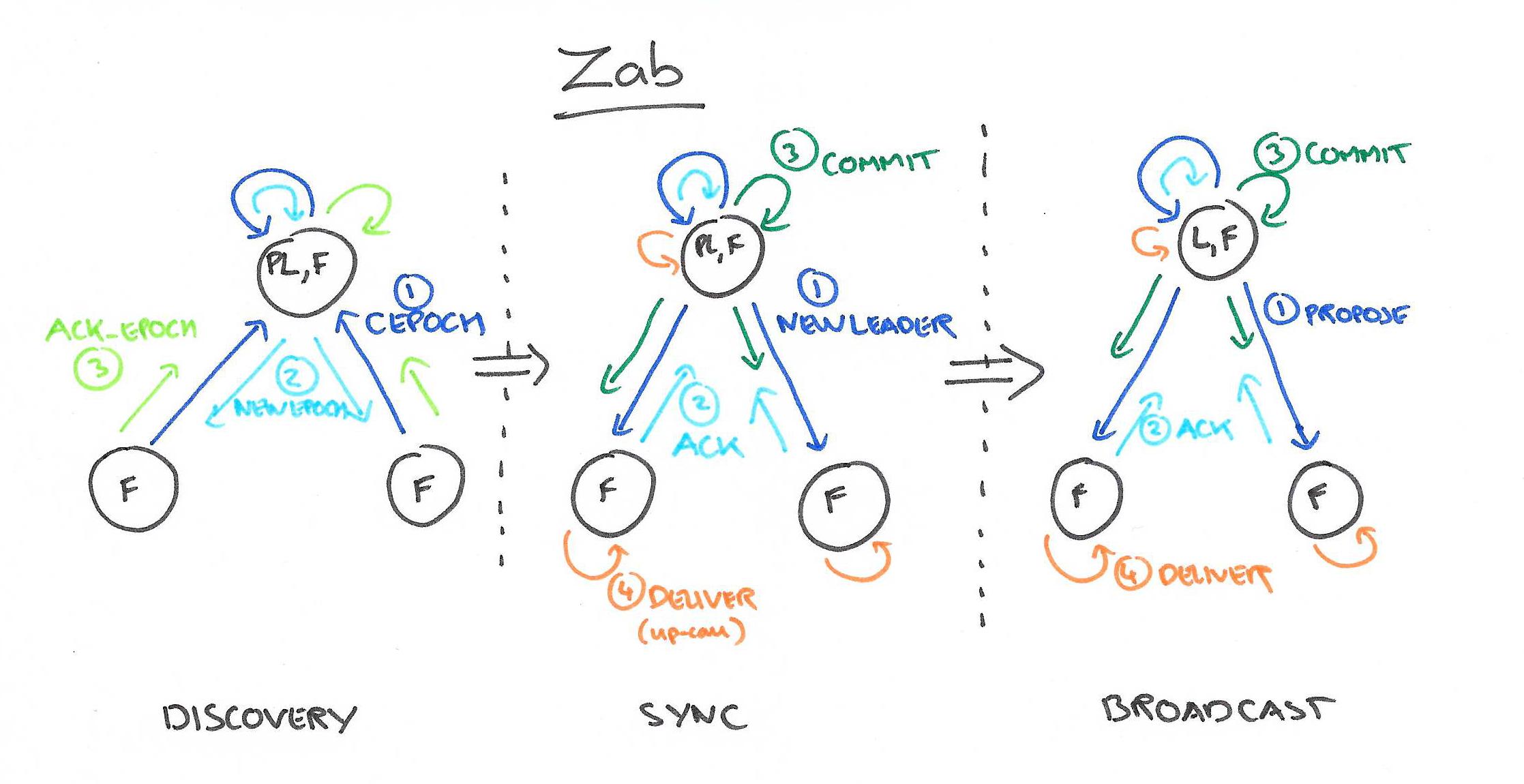 An optimisation is recommended:

Given that the history of a follower can be arbitrarily long, it is not efficient to send the entire history in a ACK-E. The last zxid of a follower is sufficient for the prospective leader to determine if it needs to copy transactions from any given follower, and only copies missing transactions.

A new epoch has now begun, with a new proposed leader. The synchronization step confirms this leadership.

An elected leader does not become established for a given epoch e until it completes Phase 2, in which it successfully achieves consensus on the proposal history and on itself as the leader of e.

This is the normal phase that the system stays in until a problem is suspected:

To mutually detect crashes in a fine-grained and convenient manner, avoiding operating system reconfiguration, leader and followers exchange periodic heartbeats. If the leader does not receive heartbeats from a quorum of followers within a timeout interval, the leader renounces leadership of the epoch, and transitions to the ELECTION state. Once it elects a leader, it starts a new iteration of the algorithm, and starts a new iteration of the protocol proceeding to Phase 1… A follower only follows one leader at a time and stays connected to a leader as long as it receives heartbeats within a timeout interval.

The basics of the broadcast phase should seem familiar by now: the leader proposes transactions in increasing order of transaction id. For each proposal the leader waits until a quorum of acknowledgements have been received, and then sends a commit message for that transaction. Note that Zab’s communication medium guarantees in-order message delivery.

This last part of the protocol seems under-specified to me in this version of the paper (of course, it’s very possible the details are there and I just can’t spot them!). The whole purpose of phase 2 (synchronization) is to get the whole group on the same page in the face of multiple outstanding transactions. So in phase 3, when the CEPOCH exchange occurs with an existing leader we need to preserve this property. Does the leader not propose any new transactions after sending back NEWLEADER with the current history until an acknowledgement is received (which would of course prevent progress until a timeout in the worst case)? Or is there an implied catch-up mechanism so that any deltas to the history between NEWLEADER and the subsequent commit can be received by the new follower? I suspect the latter. Such a copy mechanism is described informally for the leader to catch-up during synchronization:

The last zxid of a follower is sufficient for the prospective leader to determine if it needs to copy transactions from any given follower, and only copies missing transactions.