I was drawn in by the headline results here:

This paper presents an analysis of how Linux’s performance has evolved over the past seven years… To our surprise, the study shows that the performance of many core operations has worsened or fluctuated significantly over the years.

When you get into the details I found it hard to come away with any strongly actionable takeaways though. Perhaps the most interesting lesson/reminder is this: it takes a lot of effort to tune a Linux kernel. For example:

Clearly, performance comes at a high cost, and unfortunately, this cost is difficult to get around. Most Linux users cannot afford the amount of resource large enterprises like Google put into custom Linux performance tuning…

For Google of course, there’s an economy of scale that makes all that effort worth it. For the rest of us, if you really need that extra performance (maybe what you get out-of-the-box or with minimal tuning is good enough for your use case) then you can upgrade hardware and/or pay for a commercial license of a tuned distributed (RHEL).

A second takeaway is this: security has a cost!

The authors selected a set of diverse application workloads, as shown in the table below, and analysed their execution to find out the system call frequency and total execution time.

A micro-benchmark suite, LEBench was then built around tee system calls responsible for most of the time spent in the kernel. 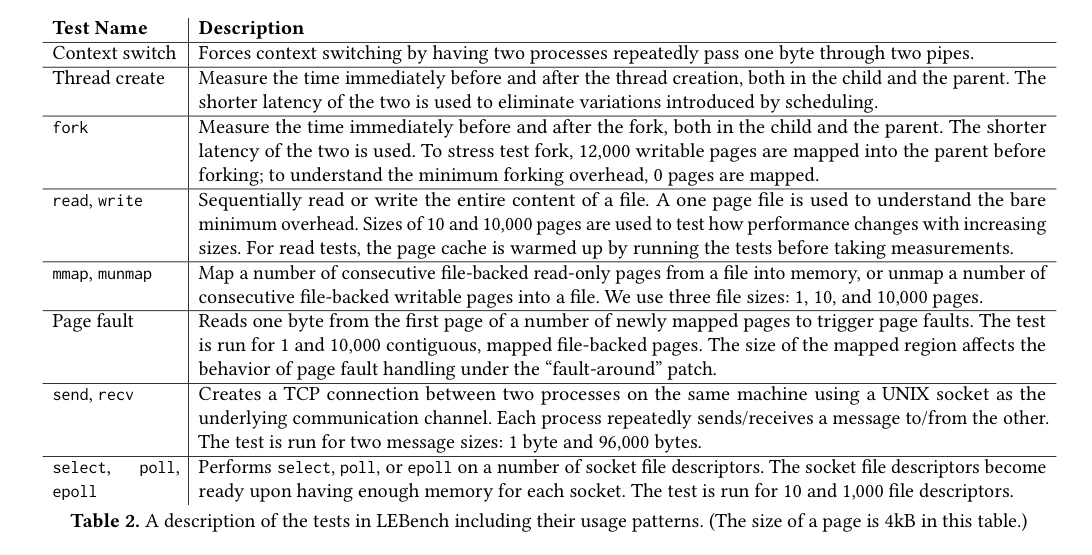 On the exact same hardware, the benchmark suite is then used to test 36 Linux release versions from 3.0 to 4.2.0.

The following figure shows the relative speed-up/slow-down across the benchmarked calls (y-axis) across releases (x-axis). The general pattern to my eye is that things were getting better / staying stable until around v4.8-v.14, and after that performance starts to degrade noticeably. 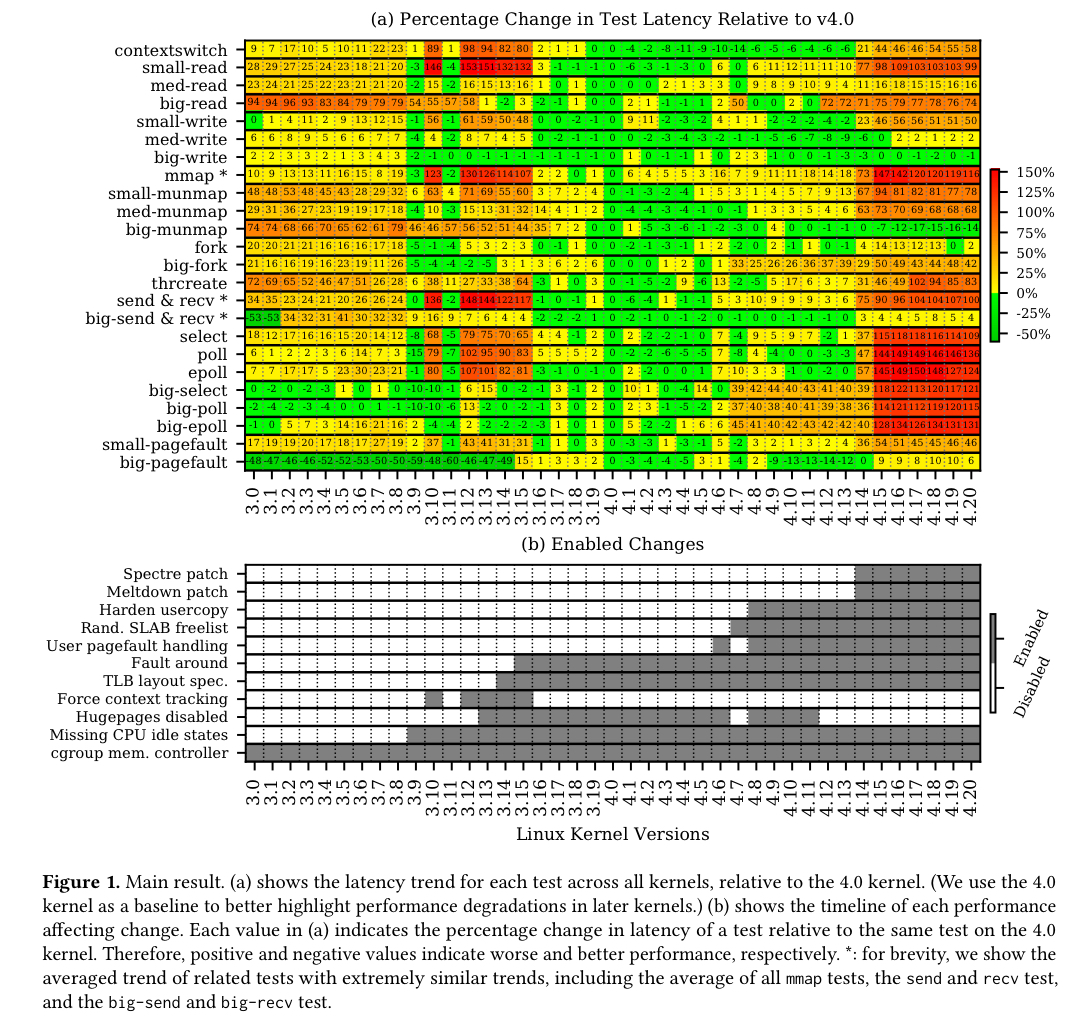 We identify 11 kernel changes that explain the significant performance fluctuations as well as more steady sources of overhead.

In terms of the maximum combined slowdown though, it’s not the Meltdown and Spectre patches that cause the biggest slowdowns (146% cf. a 4.0 baseline), but missing or misconfigured configuration changes (171%). New features also contribute a combined maximum slowdown of 167%. If you drill down into the new features though, some of these are arguably security related too -e.g. the cgroup memory controller change for containers. 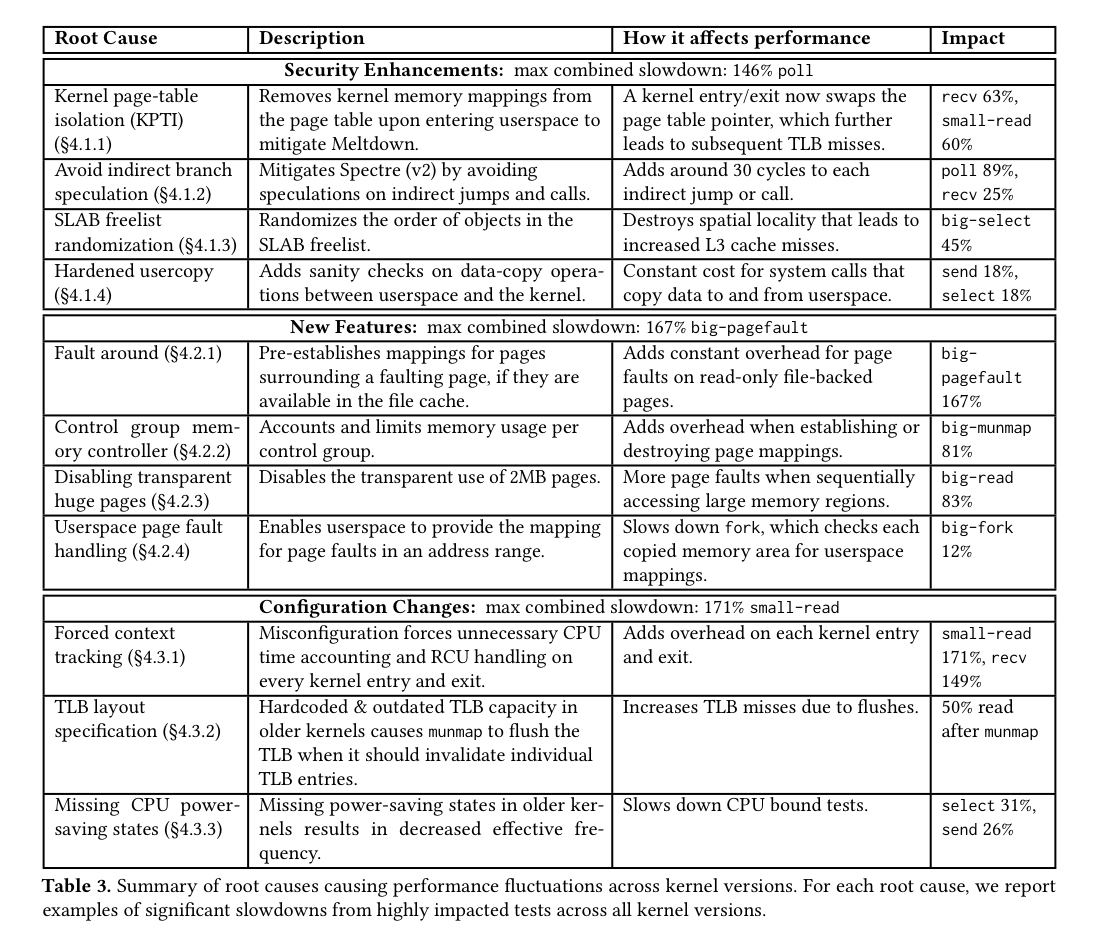 The following chart shows the impact of these 11 changes across the set of system calls under study. 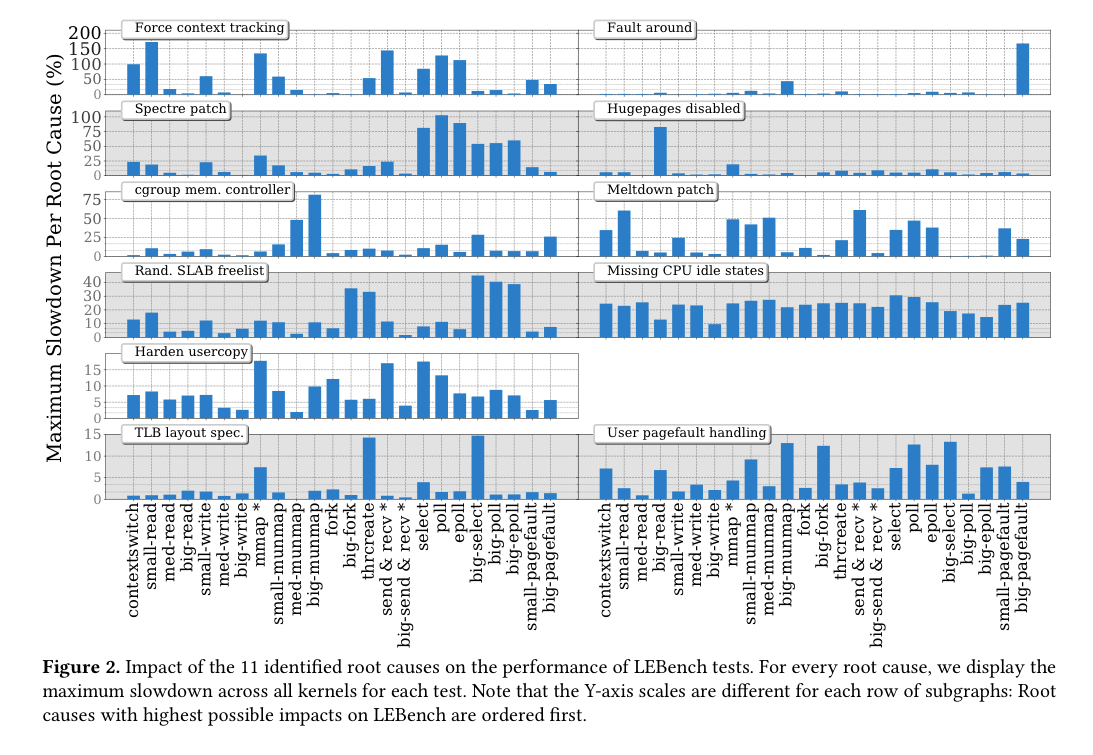 It’s possible to avoid the overheads from these 11 changes if you want to, but that doesn’t feel like a path to recommend for most of them!

Testing against real-world workloads (Redis, Apache, Nginx), disabling the 11 root causes results in maximum performance improvements in these three applications of 56%, 33%, and 34% respectively. On closer examination, 88% of the slowdowns experienced by these applications can be tied back to just four of the eleven changes: forced context tracking (a configuration error), kernel page table isolation (Meltdown protection), missing CPU idle power states (in the configuration bucket, but really due to older kernel versions lacking specifications for the newer hardware used in the benchmarking, which is kind of fair game?), and avoidance of indirect jump speculation (Spectre).