This is an investigation into the phenomenon of lateral phishing attacks. A lateral phishing attack is one where a compromised account within an organisation is used to send out further phishing emails (typically to other employees within the same organisation). So ‘alice at example.com’ might receive a phishing email that has genuinely been sent by ‘bob at example.com’, and thus is more likely to trust it.

In recent years, work from both industry and academia has pointed to the emergence and growth of lateral phishing attacks: a new form of phishing that targets a diverse range of organizations and has already incurred billions of dollars in financial harm…. This attack proves particularly insidious because the attacker automatically benefits from the implicit trust in the hijacked account: trust from both human recipients and conventional email protection systems. 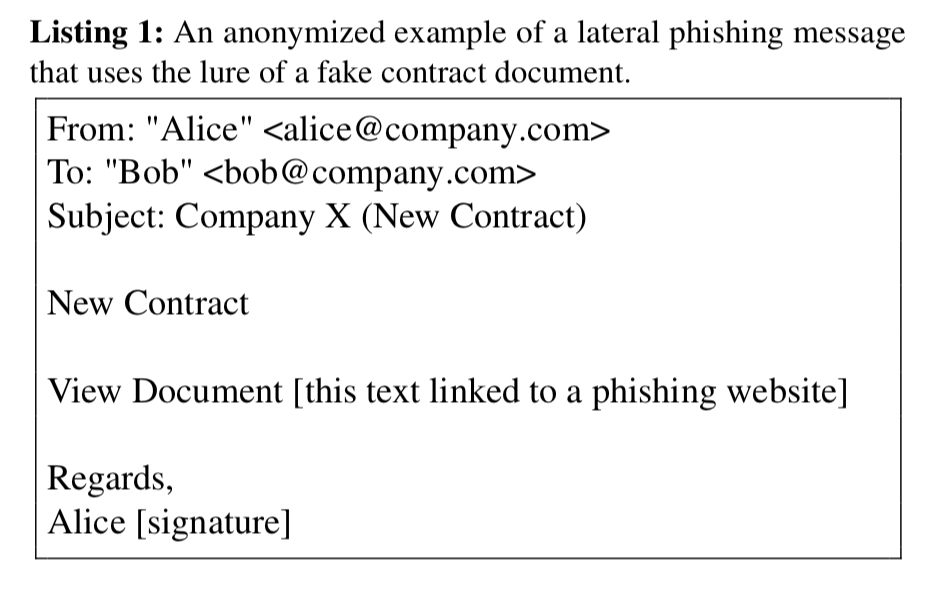 A dataset of 113 million emails…

All told, the dataset comprises 113,083,695 unique employee-sent emails, spanning a total of around 230K mailboxes. In order to be able to study lateral phishing within these organisations, first we have to find the phishing attacks within the dataset. The approach to this is twofold:

The focus is on phishing attacks which lure their victims into visiting a web page under the attacker’s control, which is the mechanism used by the vast majority of lateral phishing attacks.

Analysis of the reported phishing attacks (ground truth) suggested a set of features to be used for training a classifier:

A Random Forest classifier is trained using these extracted features, and updated at the end of each month.

The resulting classifier achieved an 87.3% detection rate with a false positive rate of 0.00036%. 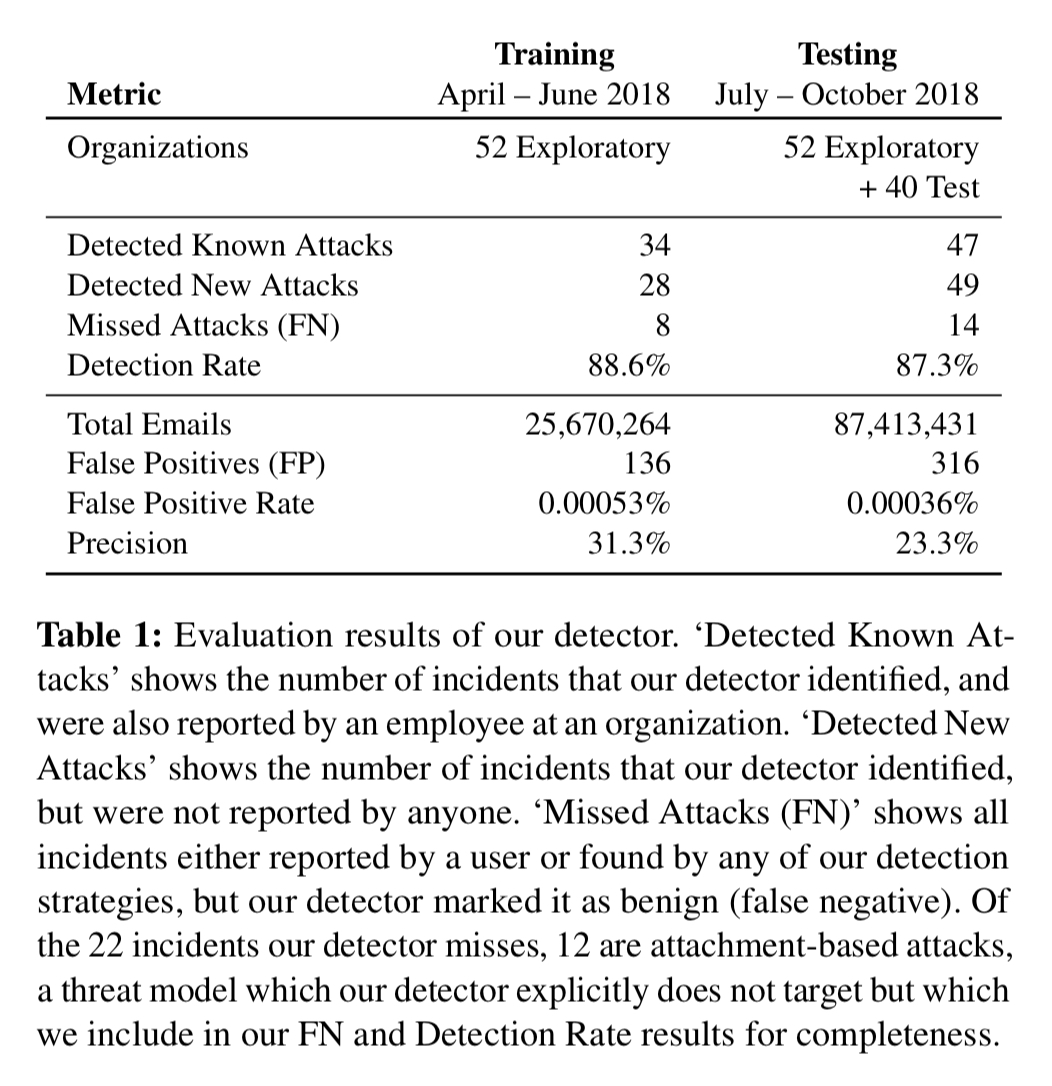 The counts in the above table are of phishing incidents, and incident being a unique (subject, sender email address) pair. I.e., each incident is likely to target many potential victims.

Something looks phishy round here

At the end of the day, from a dataset of 113M emails spanning 230K mailboxes, the authors found that 101K mailboxes had received at least one lateral phishing email. These phishing emails were generated in just 180 incidents, sending 1,902 distinct email bodies from 154 compromised accounts. 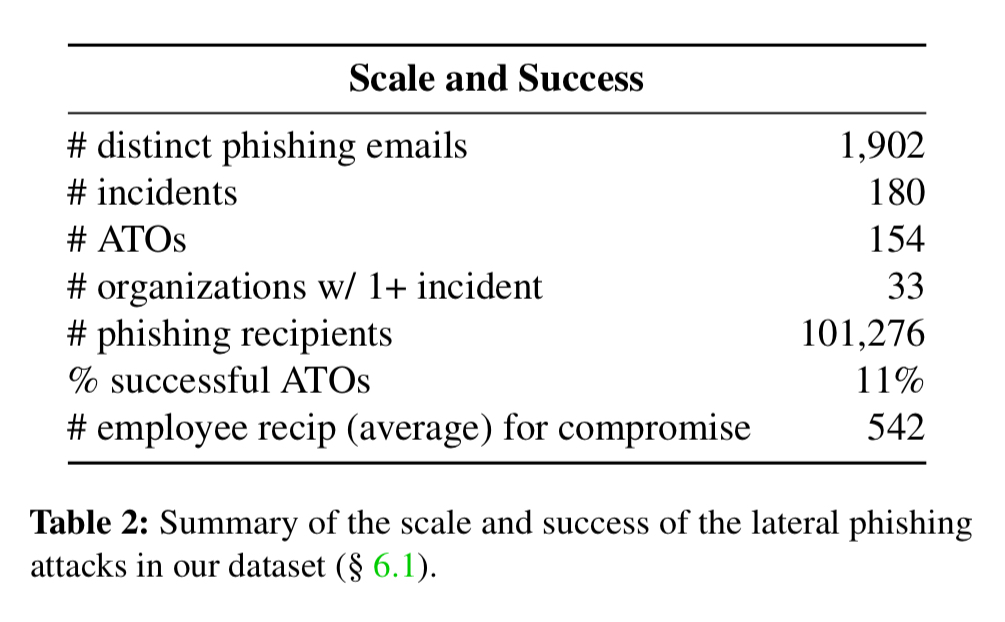 How successful are these phishing attacks?

We can’t know the true success rate for these attacks, but we can estimate a lower bound as follows: if Bob receives a phishing email from Alice’s account, and shortly afterwards (within two days) Bob’s account starts sending similar phishing emails, then it is likely that these phishing emails are related. I.e., the attack sent from Alice’s account was successful. On this basis about 11% of account takeovers successfully lead to the compromise of at least one other account.

How do attackers target accounts?

Once an attacker has compromised an account within an organisation, what strategies do they use to determine the set of target accounts to send emails to?

Firstly, we’re looking at broadcast attacks here, not highly personalised spear-phishing. Most attackers (94%) use a compromised account to send phishing emails to at least 100 recipients (using a mass BCC, or through many individual emails).

There seem to be a variety of approaches in use for selecting the recipients, as show in the table below.

Very few of the collected phishing emails contained targeted content, i.e., at this level of phishing attackers are pushing out template emails.

For the present moment, these attackers (across dozens of organisations) see more value in opportunistically phishing as many recipients as possible, rather than investing time to mine the hijacked accounts for personalized spearphishing fodder.

There is limited support for customising the subject line and the name used within the email: e.g. from “You have a new shared document available” at one end of the spectrum to “Please see the attached announcement about FooCorp’s 25th year anniversary” at the other. 92.7% of incidents used generic messages that could be deployed at a large number of organisations with only minimal changes.

There are two widespread lures in use to try and get potential victims to click on the target link:

Those links are likely to go to a page that looks something like this: 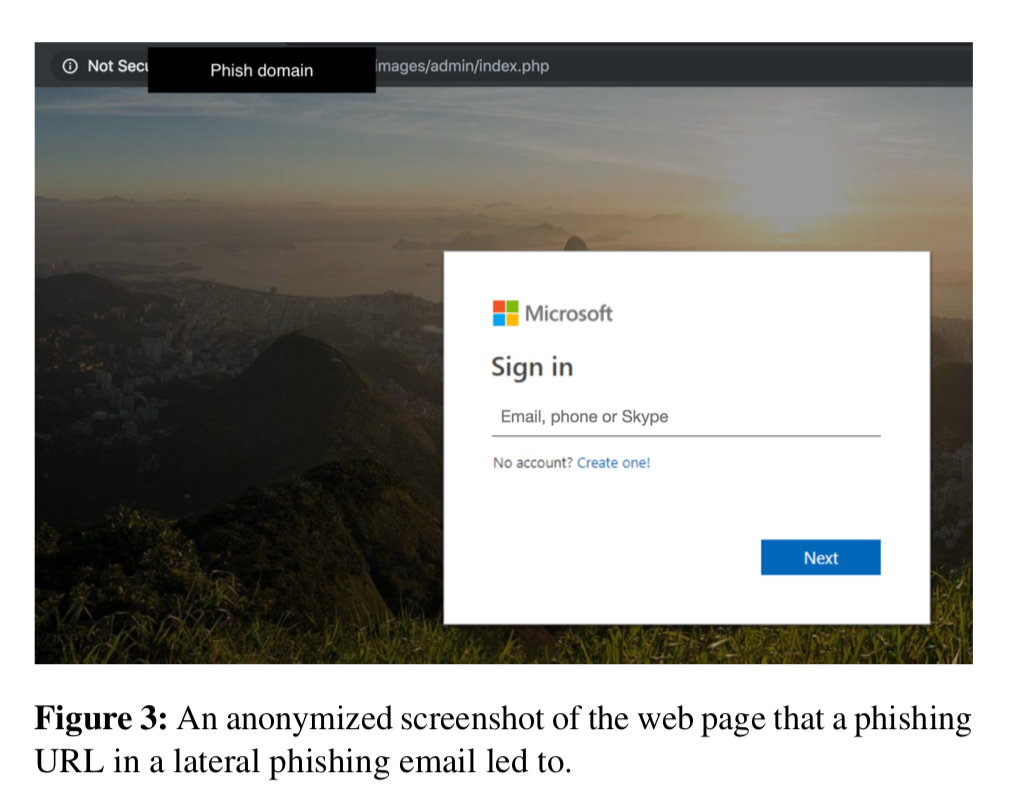 When are phishing emails sent?

Contrary to popular suspicion, most phishing emails were sent at ‘normal’ working times of the day and week for the hijacked accounts.

How sophisticated are the attackers?

If the recipient of a phishing email sends a follow-up asking for clarification, e.g. “Is this really genuine, Bob?,” a subset of the attackers will send brief replies e.g. “Yes, I sent it to you”, or “Yes, have you checked it yet?”. Some attackers escalate the attack to the next level with replies such as “Hi [Alice], it’s a document about [X]. It’s safe to open. You can view it by logging in with your email and password.”

Another subset of attackers actively tried to hide their tracks by deleting emails within 30 seconds or so of them being sent or received (to remove them from the sent folder).

One plausible reason for this generic behavior is that the simple methods they currently use work well enough under their economic model.

Ultimately, our work provides the first large-scale insights into an emerging, widespread form of enterprise phishing attacks, and illuminates techniques and future ideas for defending against this potent threat.