This is a fascinating study of the npm ecosystem, looking at the graph of maintainers and packages and its evolution over time. It’s packed with some great data, and also helps us quantify something we’ve probably all had an intuition for— the high risks involved in depending on a open and fast-moving ecosystem. One the key takeaways for me is the concentration of reach in a comparatively small number of packages and maintainers, making these both very high value targets (event-stream, it turns out, wouldn’t even have made the top-1000 in a list of ranked targets!), but also high leverage points for defence. We have to couple this of course with an exceedingly long tail.

As the primary source of third-party JavaScript packages for the client-side, server-side, and other platforms, npm is the centrerpiece of a large and important software ecosystem.

Npm is an open ecosystem hosting a collection of over 800,000 packages as of February 2019, and it continues to grow rapidly. 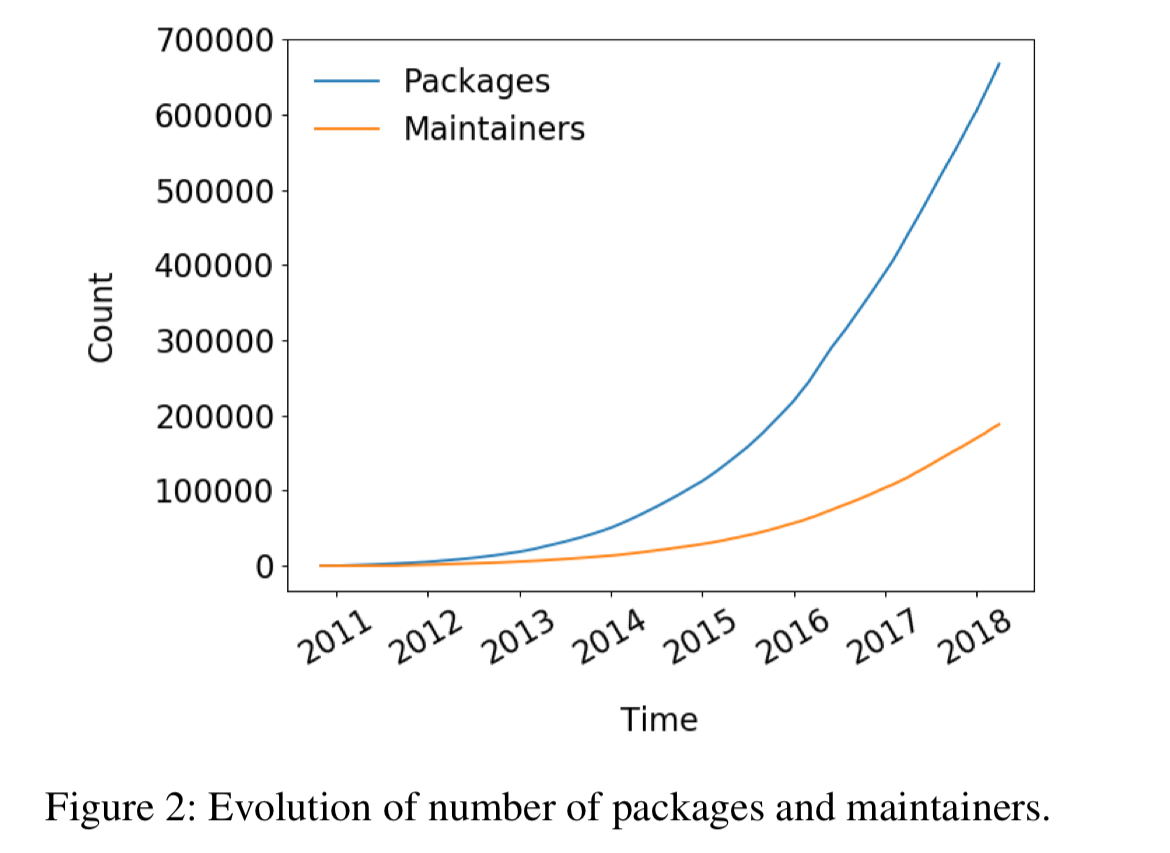 To share a package on npm, a maintainer creates an account on the npm website and runs npm publish in a local folder containing a package.json file. No link to a public version control system (e.g. GitHub) is required, and there is no formal connection between package maintainers on npm and project maintainers on GitHub.

Some unique characteristics of the npm ecosystem vs other package ecosystems are the high number of transitive dependencies, and heavy reliance on micropackages consisting of only a few lines of code.

So what could possibly go wrong? The paper considers the potential impact of a variety of different attacks:

And of course there are many variations and combinations of the above.

The analysis is this paper is based on downloading the metadata for all packages ever published in npm (up to April 2018), and building a graph of packages, their maintainers, and the dependencies between packages. That leads to a graph with almost 700K nodes and 4.5M edges. 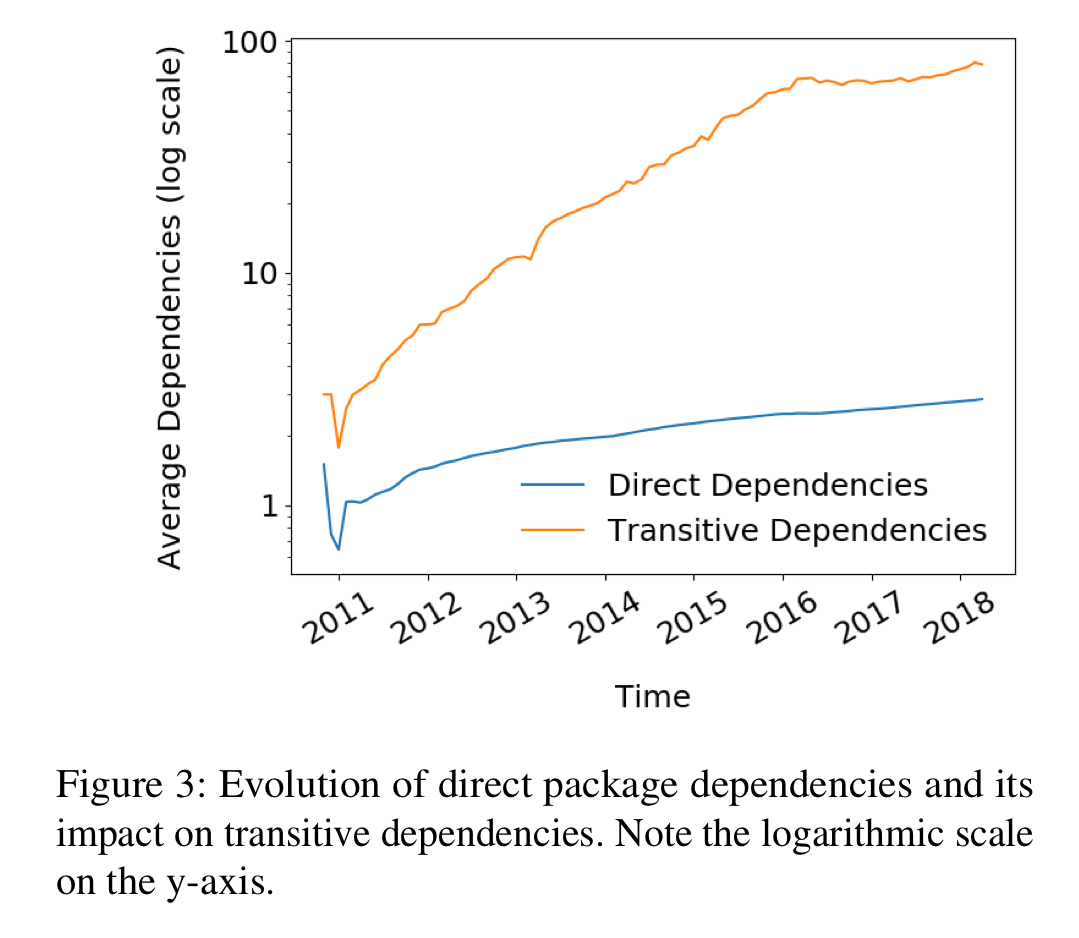 The bottom line for package dependencies is this:

When installing an average npm package, a user implicitly trusts around 80 other packages due to transitive dependencies.

Looking at this in the other direction, we can consider the package reach of a package as the number of other packages that directly or indirectly include it. In other words, if a given target package is compromised, how big is the blast radius? The average blast radius for a package has also been growing over time: 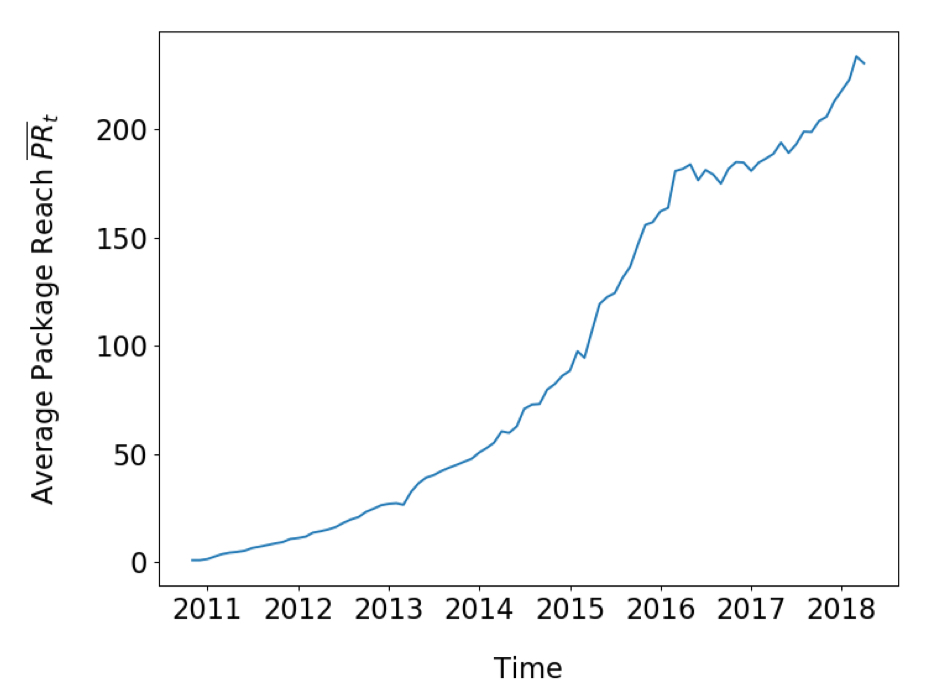 More interesting though, is that a ‘rich get richer’ phenomenon is observable whereby the most popular packages are becoming even more popular. The reach of the top 5 packages is shown below. 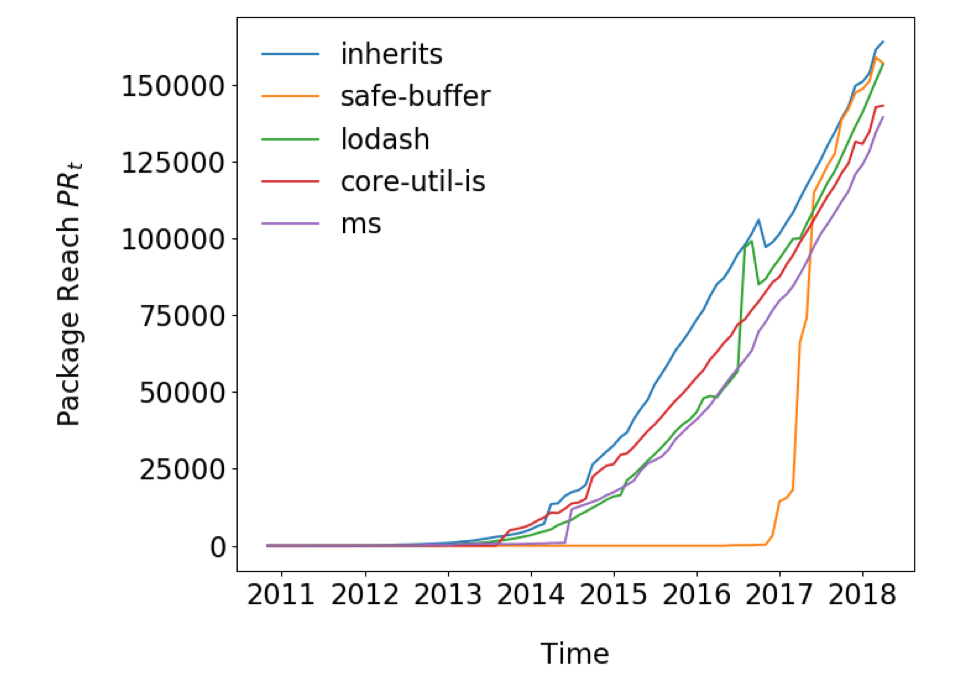 Some highly popular packages reach more than 100,000 other packages (emphasis mine), making them a prime target for attacks.

If we rank packages by the size of their potential blast radius on compromise, event-stream would only be #1,165 in the list, with a package reach of 5,466. So in a sense, we all got off lightly!! The eslist-scope attack targeted a package at #347 in the list (when considering runtime and development dependencies).

In 2018 the average npm maintainer was responsible for almost 4.5 packages. Some maintainers are responsible for over 100 packages though. Looking at the top 5 maintainer handles according to number of packages, we can again see an increase in the concentration of power. 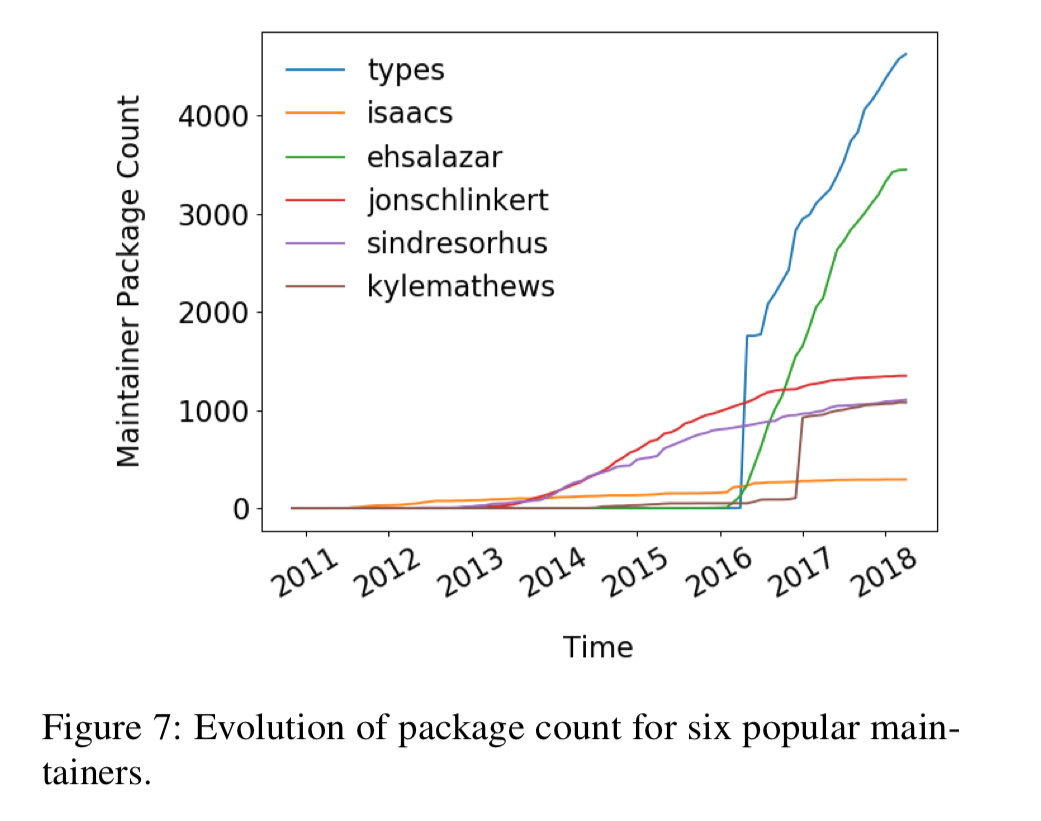 (types here is almost certainly a joint account with multiple Microsoft employees behind it maintaining type definitions for TypeScript, isaacs is the founder of npm).

The number of packages that both the influential and the average maintainers control increased continuously over the years. Looking at it the other way, the number of maintainers implicitly trusted by a given package (i.e., as the maintainers of its transitive dependencies) is also going up. 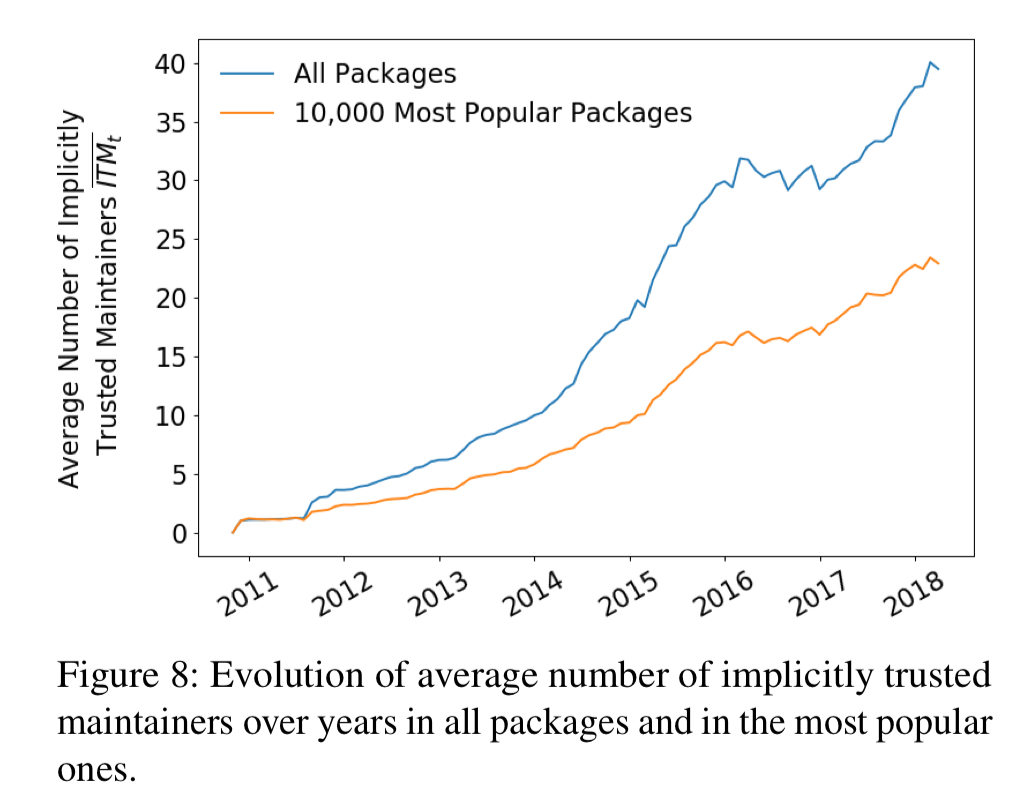 If you wanted to target a maintainer’s account for takeover, a quick peek at the graph shows that 391 highly influential maintainers affect more than 10,000 packages, making them prime targets for attacks.

Just looking at known published vulnerabilities, the authors estimate that up to 40% of all packages rely code known to be vulnerable. (We saw a similar phenomenon when looking at frond-end js libraries.)

To be honest, with current practices this all paints a picture of a lost cause with many high value, high blast radius attack targets that is incredibly difficult to secure. The authors offer some pragmatic suggestions as a way forward, targeting those high value targets for good rather than evil!

The overall conclusion is that npm is a small world with high risks. It is “small” in the sense that packages are densely connected via dependencies. The security risk is “high” in the sense that vulnerable or malicious code in a single package may affect thousands of others, and that a single misbehaving maintainer, e.g., due to a compromised account, may have a huge negative impact.