We’ve seen a lot of exciting work exploiting combinations of RDMA, FPGAs, and programmable network switches in the quest for high performance distributed systems. I’m as guilty as anyone for getting excited about all of that. The wonderful thing about today’s paper, for which Kalia et al. won a best paper award at NSDI this year, is that it shows in many cases we don’t actually need to take on that extra complexity. Or to put it another way, it seriously raises the bar for when we should.

eRPC (efficient RPC) is a new general-purpose remote procedure call (RPC) library that offers performance comparable to specialized systems, while running on commodity CPUs in traditional datacenter networks based on either lossy Ethernet or lossless fabrics… We port a production grade implementation of Raft state machine replication to eRPC without modifying the core Raft source code. We achieve 5.5 µs of replication latency on lossy Ethernet, which is faster than or comparable to specialized replication systems that use programmable switches, FPGAs, or RDMA.

eRPC just needs good old UDP. Lossy Ethernet is just fine (no need for fancy lossness networks), and it doesn’t need Priority Flow Control (PFC). The received wisdom is that you can either have general-purpose networking that works everywhere and is non-intrusive to applications but has capped performance, or you have to drop down to low-level interfaces and do a lot of your own heavy lifting to obtain really high performance.

The goal of our work is to answer the question: can a general-purpose RPC library provide performance comparable to specialized systems?

From the evaluation using two lossy Ethernet cluster (designed to mimic the setups used in Microsoft and Facebook datacenters):

eRPC’s median latency on CX5 is only 2.3µs, showing that latency with commodity Ethernet NICs and software networking is much lower than the widely-believed value of 10-100µs.

(CURP over eRPC in a modern datacenter would be a pretty spectacular combination!).

So the question that immediately comes to mind is how? As in, “what magic is this?”.

The secret to high-performance general-purpose RPCs

… is a carefully considered design that optimises for the common case and also avoids triggering packet loss due to switch buffer overflows for common traffic patterns.

That’s it? Yep. You won’t find any super low-level fancy new exotic algorithm here. Your periodic reminder that thoughtful design is a high leverage activity! You will of course find something pretty special in the way all the pieces come together.

So what assumptions go into the ‘common case?’

Which is not to say that eRPC can’t handle larger messages, long-running handlers, and congested networks. It just doesn’t pay a contingency overhead price when they are absent.

Optimisations for the common case (which we’ll look at next) boost performance by up to 66% in total. On this base eRPC also enables zero-copy transmissions and a design that scales while retaining a constant NIC memory footprint.

The core model is as follows. RPCs are asynchronous and execute at most once. Servers register request handler functions with unique request types, and clients include the request types when issuing requests. Clients receive a continuation callback on RPC completion. Messages are stored in opaque DMA-capable buffers provided by eRPC, called msg-bufs. Each RPC endpoint (one per end user thread) has an RX and TX queue for packet I/O, an event loop, and several sessions.

The long and short of it

eRPC supports running handlers in dispatch threads for short duration request types (up to a few hundred nanoseconds), and worker threads for longer running requests. Which mode to use is specified when the request handler is registered. This is the only additional user input needed in eRPC.

eRPC’s choice to use packet I/O over RDMA avoids the circular buffer scalability bottleneck in RDMA (see §4.1.1). By taking advantage of multi-packet RX-queue (RQ) descriptors in modern NICs, eRPC can use constant space in the NIC instead of a footprint that grows with the number of connected sessions (see Appendix A).

This is an explicit design choice, based upon fundamental differences between the CPU and NIC architectures. NICs and CPUs will both cache recently used connection state. CPU cache misses are served from DRAM, whereas NIC cache misses are served from the CPU’s memory subsystem over the slow PCIe bus. The CPU’s miss penalty is therefore much lower. Second, CPUs have substantially larger caches than the ~2MB available on a modern NIC, so the cache miss frequency is also lower.

Zero-copy packet I/O in eRPC provides performance comparable to lower level interfaces such as RDMA and DPDK. The msgbuf layout ensures that the data region is contiguous (so that applications can use it as an opaque buffer) even when the buffer contains data for multiple packets. The first packet’s data and header are also contiguous so that the NIC can fetch small messages with one DMA read. Headers for remaining packets are at the end, to allow for the contiguous data region in the middle.

eRPC must ensure that it doesn’t mess with msgbufs after ownership is returned to the application, which is fundamentally addressed by making sure it retains no reference to the buffer. Retransmissions can interfere with such a scheme though. eRPC chooses to use “unsignaled” packet transmission optimising for the common case of no retransmission. The trade-off is a more expensive process when retransmission does occur:

We flush the TX DMA queue after queuing a retransmitted packet, which blocks until all queued packets are DMA-ed. This ensures the required invariant: when a response is processed, there are no references to the request in the DMA queue.

eRPC provides zero copy reception for workloads under the common-case of single packet requests and dispatch mode request handlers too, which boosts eRPCs message rate by up to 16%.

Sessions support concurrent requests (8 by default) that can complete out-of-order with respect to each other. Sessions use an array of slots to track RCP metadata for outstanding requests, and slots have an MTU-size preallocated msgbuf for use by request handlers that issue short responses. Session credits are used to implement packet-level flow control. Session credits also support end-to-end flow control to reduce switch queuing. Each session is given BDP/MTU credits, which ensures that each session can achieve line rate.

We designed a wire protocol for eRPC that is optimized for small RPCs and accounts for per-session credit limits. For simplicity, we chose a simple client-driven protocol, meaning that each packet sent by the server is in response to a client packet.

Single-packet RPCs (request and response require only a single packet) use the fewest packets possible. With multi-packet responses and a client-driven protocol the server can’t immediately send response packets after the first one, so the client sends a request-for-response (RFR) packet. In practice this added latency turned out to be less than 20% for responses with four or more packets.

eRPC can use either Timely or DCQCN for congestion control. The evaluation uses Timely as the cluster hardware could not support DCQCN. Three optimisation brought the overhead of congestion control down from around 20% to 9%:

These optimisation works because datacenter networks are typically uncongested. E.g. at one-minute timescales 99% of all Facebook datacenter links are uncongested, and for web and cache traffic Google, 90% of ToR switch links (the most congested), are less than 10% utilized at 25 µs timescales.

eRPC keeps things simple by treating re-ordered packets as losses and dropping them (as do current RDMA NICs). When a client suspects a lost packet it rolls back the request’s wire protocol state using a ‘go-back-N’ mechanism. It reclaims credits and retransmits from the rollback point.

This write-up is in danger of getting too long again, so I’ll keep this very brief. The following table shows the contribution of the various optimisations through ablation:

We conclude that optimizing for the common case is both necessary and sufficient for high-performance RPCs.

Here you can see latency with increasing threads. eRPC achieves high message rate, bandwidth, and scalability with low latency in a large cluster with lossy Ethernet. 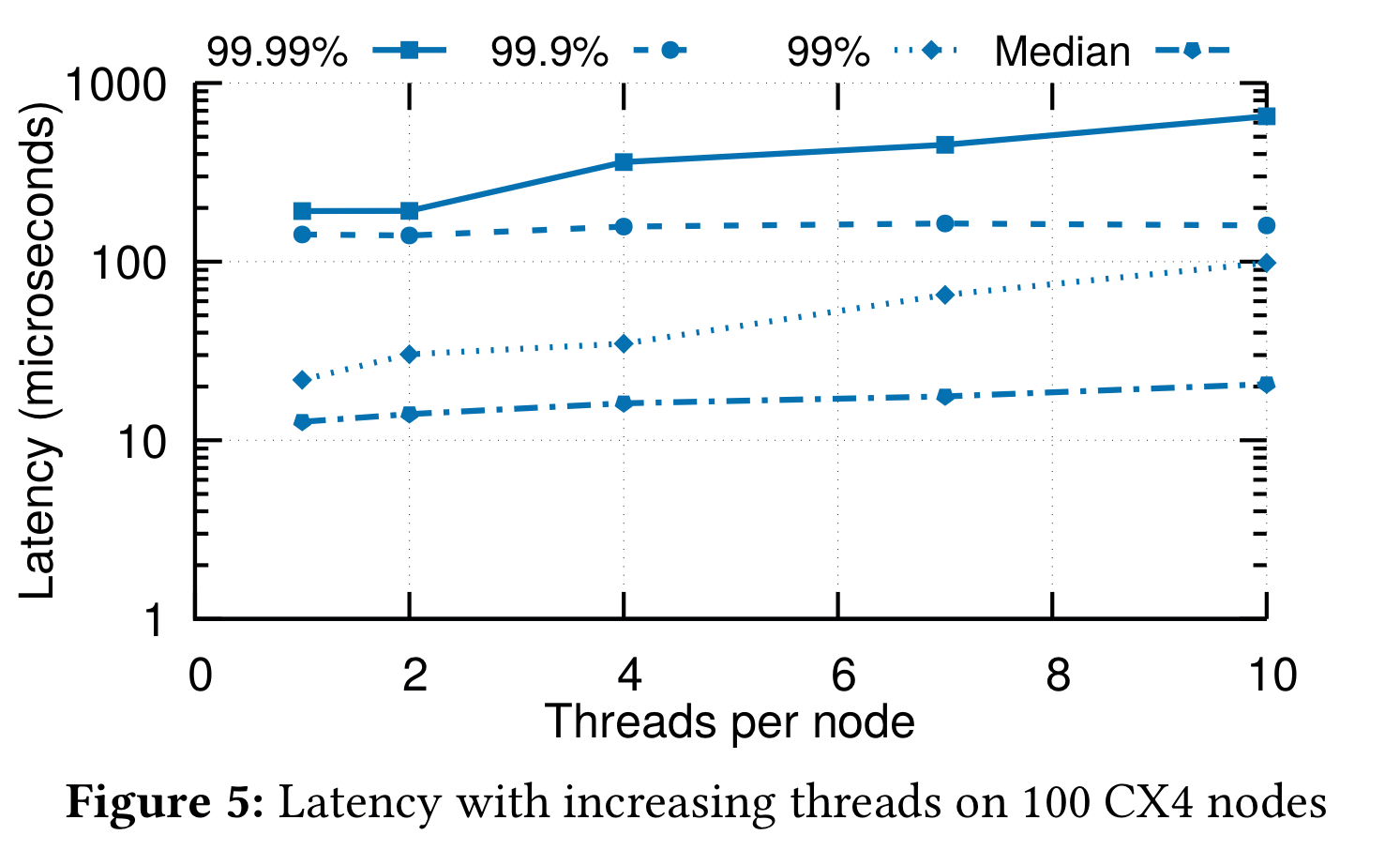 For large RPCs, eRPC can achieve up to 75 Gbps with one core. 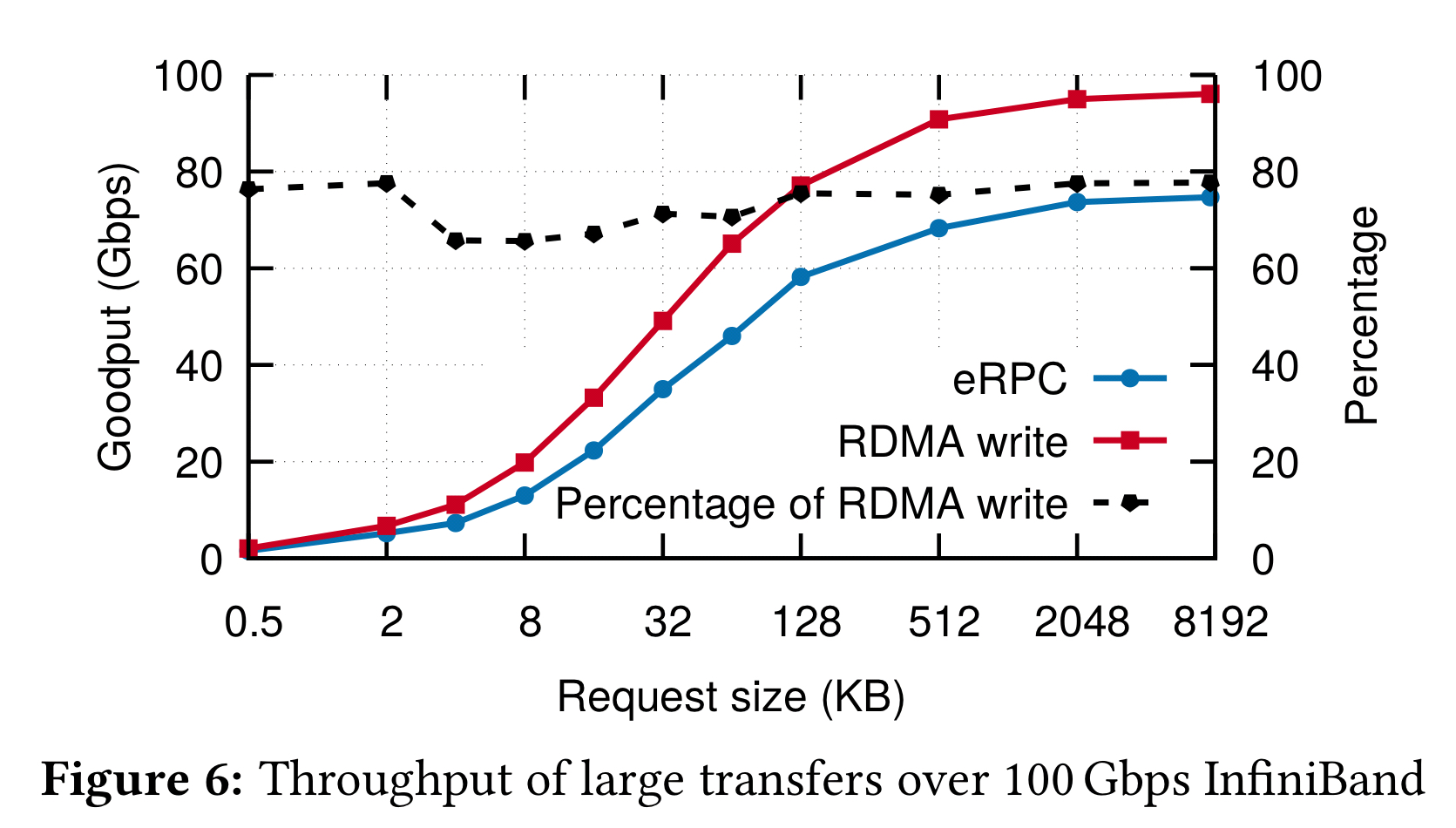 Section 7 discusses the integration of eRPC in an existing Raft library, and in the Masstree key-value store. From the Raft section the authors conclude: “the main takeaway is that microsecond-scale consistent replication is achievable in commodity Ethernet datacenters with a general-purpose networking library.”