Who left open the cookie jar? A comprehensive evaluation of third-party cookie policies from the Franken et al., USENIX Security 2018

This paper won a ‘Distinguished paper’ award at USENIX Security 2018, as well as the 2018 Internet Defense Prize. It’s an evaluation of the defense mechanisms built into browsers (and via extensions / add-ons) that seek to protect against user tracking and cross-site attacks. Testing across 7 browsers and 46 browser extensions, the authors find that for virtually every browser and extension combination there is a way to bypass the intended security policies.

Despite their significant merits, the way cookies are implemented in most modern browsers also introduces a variety of attacks and other unwanted behavior. More precisely, because cookies are attached to every request, including third-party requests, it becomes more difficult for websites to validate the authenticity of a request. Consequently, an attacker can trigger requests with a malicious payload from the browser of an unknowing victim… Next to cross-site attacks, the inclusion of cookies in third-party requests also allows fo users to be tracked across the various websites they visit.

When you visit a site A, it can set a cookie to be included in all future requests to that site. This paper is concerned with third-party requests. This is where you visit site B, but some resource on site B triggers a request to be made to site A (for example, an img tag with a src attribute referencing site A). Cookies set for site A flow with that request (depending on the cookie policy). A good example of exploiting this mechanism is the well-known CSRF attack. 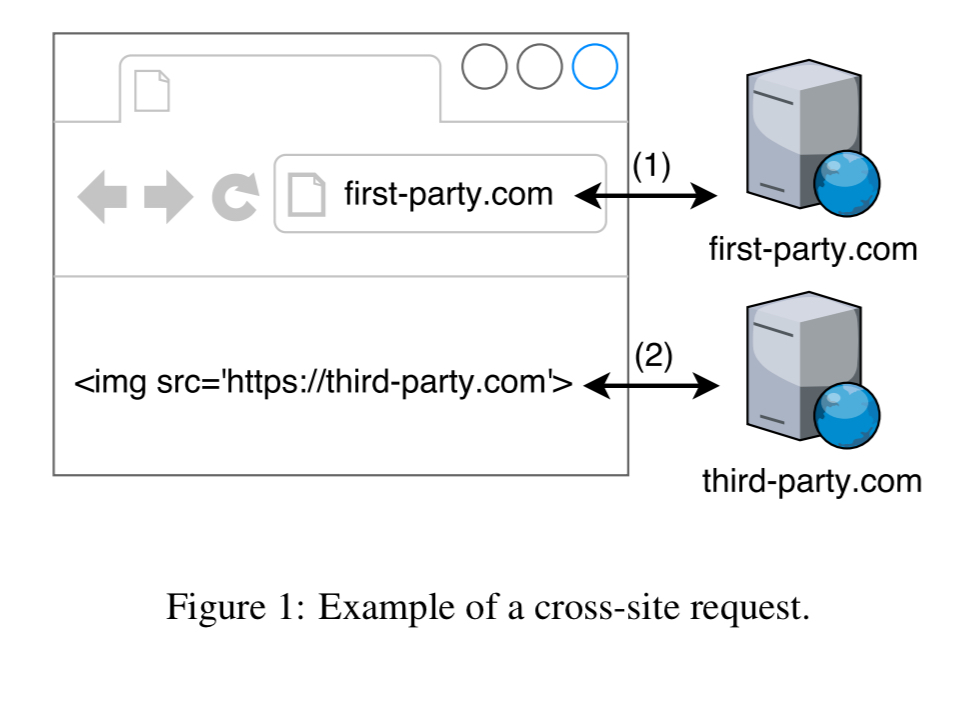 There are other cross-site attacks too, such as cross-site script scripting (XSS) and cross-site timing attacks.

In order to exhaustively test all the possible cross-site request mechanisms, the first job is to list them all. The authors found seven different mechanism categories, encompassing hundreds of individual mechanisms between them.

All of these request-initiating mechanisms can be triggered in a variety of different ways (e.g. inclusion via iframes or importScripts in JavaScript). The composition mechanism turned out not to make a different to the test results so details are omitted from the main paper, but you can find them in appendix A if you’re interested.

Test all the things

The authors put together a test framework that can exercise all of the possible cross-site request mechanisms across different browsers and extensions.

The primary goal of our evaluation was to analyze browsers for which inconsistencies and bypasses would have the largest impact. On the one hand, we included the most popular and widely-used browsers: Chrome, Opera, Firefox, Safari, and Edge. On the other hand, we also incorporated browsers that are specifically targeted towards privacy-aware users…

Browsers were tested using the default settings for their protection mechanisms. In addition, 46 different extensions for the four most popular browsers were tested, selected based on the extension popularity as reported in the respective stores.

The results for the 7 evaluated browsers are summarised in the table below (filled circle indicating cookies were sent with the request). 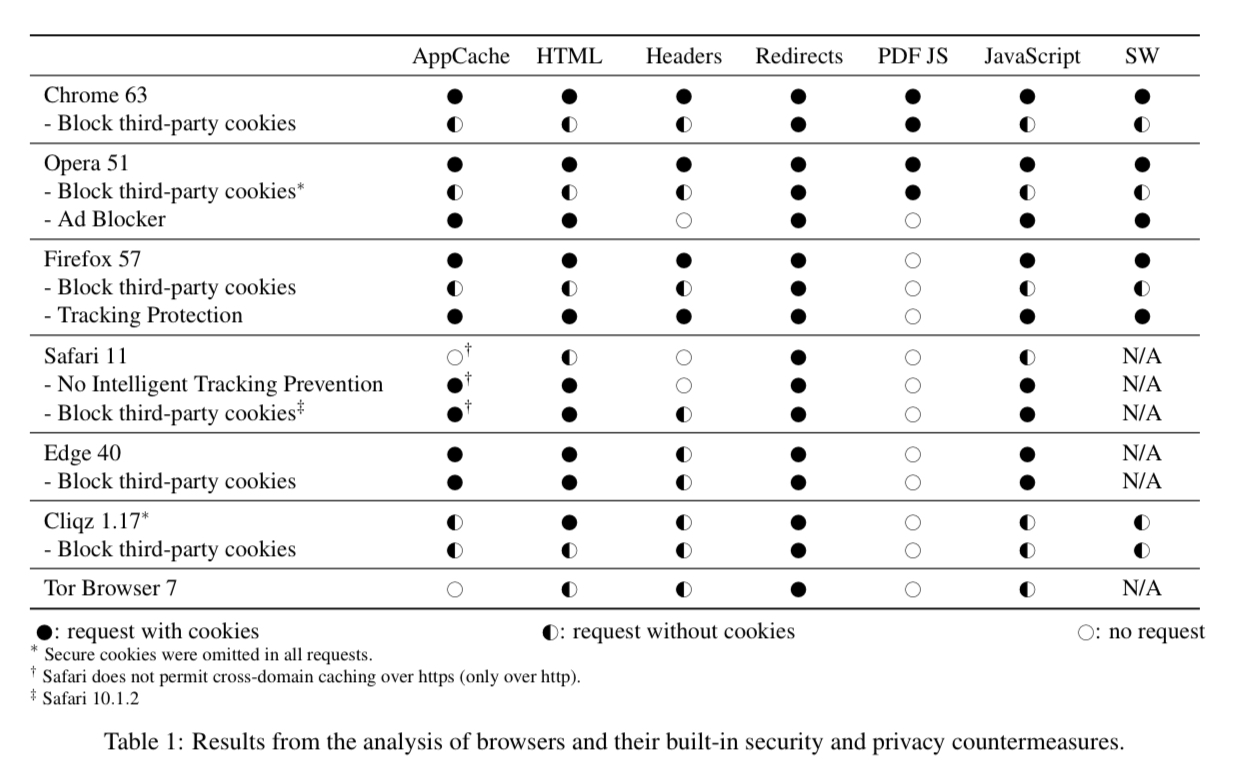 Because PDFs can be included in iframes, and thus made invisible to the end user, and because it can be used to send authenticated POST requests, this bypass technique could be used to track users or perform cross-site attacks without raising the attention of the victim.

31 ad-blocking extensions were evaluated, and bypasses found for all of them: 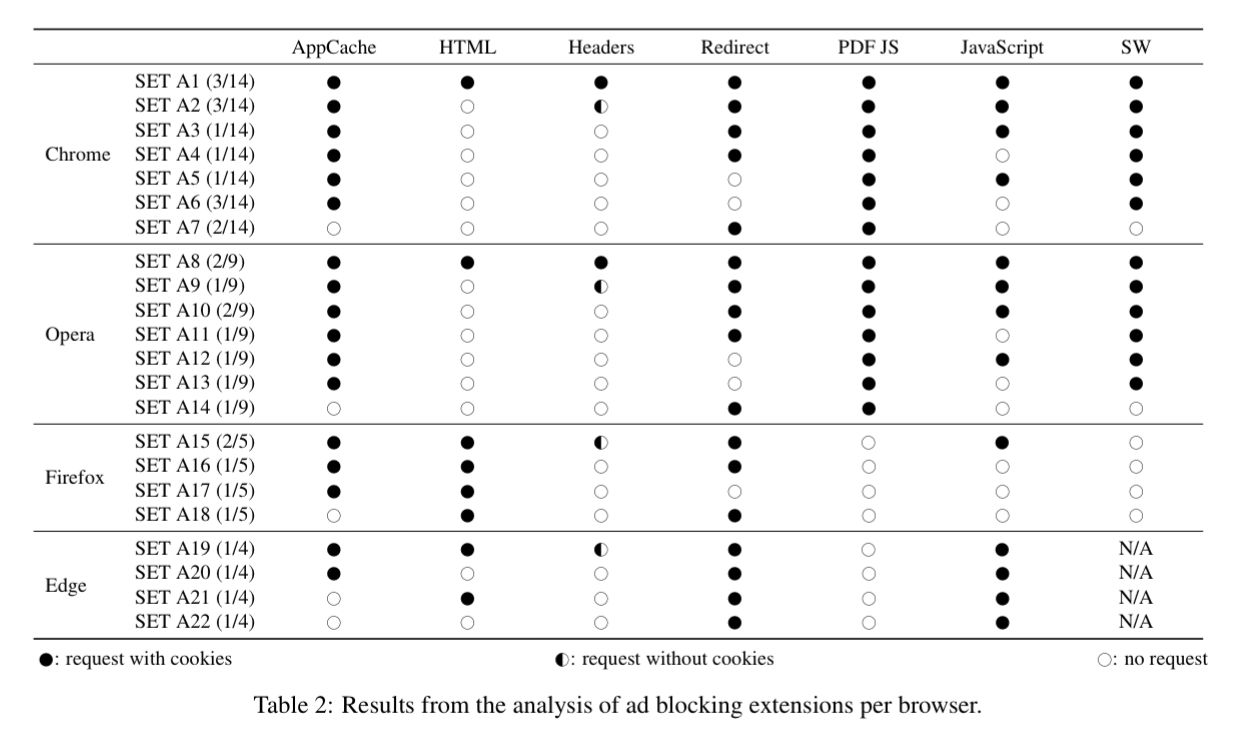 15 tracking protection extensions were also evaluated, and bypasses found for all of them as well!

A common mistake with extension developers is to register to filter http and https protocol requests, but forget about ws:// and wss:// protocols.

In summary, we found that for every built-in browser protection as well as for every anti-tracking and ad blocking browser extension, there exists at least one technique that can bypass the imposed policies… Based on these results, we argue that our proposed framework is a much-need tool to detect bypasses and evaluate solutions to the exposed leaks.