This very well written paper outlines the design of HyperLedger Fabric and the rationales for many of the key design decisions. It’s a great introduction and overview. Fabric is a permissioned blockchain system with the following key features:

…in popular deployment configurations, Fabric achieves throughput of more than 3500 tps, achieving finality with latency of a few hundred ms and scaling well to over 100 peers.

Examples of use cases powered by Fabric include foreign exchange netting in which a blockchain is used to resolve trades that aren’t settling; enterprise asset management tracking hardware assets as they move from manufacturing to deployment and eventually to disposal; and a global cross-currency payments system processing transaction among partners in the APFII organisation in the Pacific region.

Fabric is a distributed operating system for permissioned blockchains that executes distributed applications written in general purpose programming languages (e.g., Go, Java, Node.js). It securely tracks its execution history in an append-only replicated ledger data structure and has no cryptocurrency built in.

A Fabric blockchain consists of a set of permissioned nodes, with identities provided by a modular membership service provider (MSP). Nodes in a the network play one of three roles; client, peer, or ordering service. 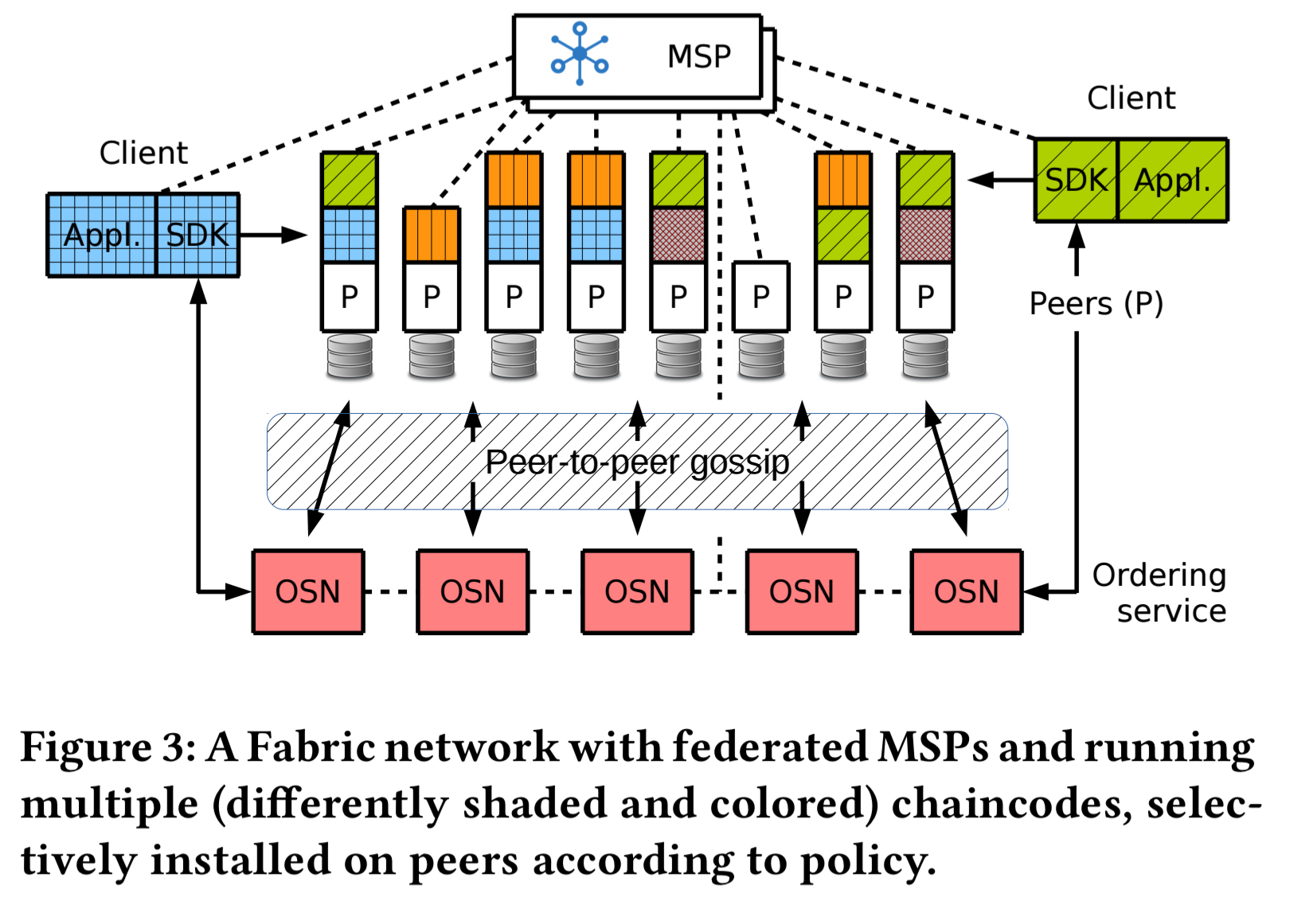 It’s possible to construct Fabric networks with multiple blockchains connected to the same ordering service, each such blockchain is called a channel.

Channels can be used to partition the state of the blockchain network, but consensus across channels is not coordinated and the total order of transactions in each channel is separate from the others.

Everything in Fabric revolves around the execute-order-validate processing pipeline. This is a departure from the traditional blockchain model.

All previous blockchain systems, permissioned or not, follow the order-execute architecture. This means that the blockchain networks orders transactions first, using a consensus protocol, and then executes them in the same order on all peers sequentially.

Fabric versions up to 0.6 also used the order-execute approach. The weakness of the order-execute are that it forces sequential execution of transactions, cannot cope with non-deterministic code, and requires all smart contracts to run on all peers, which may introduce confidentiality concerns. Feedback across many proof-of-concept applications highlighted some of the practical issues with order-execute too:

We have learned that the key properties of a blockchain system, namely consistency, security, and performance, must not depend on the knowledge and goodwill of its users, in particular since the blockchain should run in an untrusted environment.

Fabric rejects order-execute and instead using a three-phase execute-order-validate architecture. A distributed application in Fabric consists of two parts: its smart contract or chaincode, and an endorsement policy configured by system administrators which indicates which indicates permissible endorsers of a transaction.

Clients sign and send a transaction proposal to one or more endorsers for execution. Endorsers simulate the proposal, executing the operation on the specified chaincode. Chaincode runs in an isolated container. As a result of the simulation, the endorser produces a writeset (modified keys along with their new values) and a readset of keys read during the simulation, along with their version numbers. The endorser then cryptographically signs an endorsement which includes the readset and writeset, and sends this to the client.

The client collects endorsements until they satisfy the endorsement policy of the chaincode (e.g. x of N). All endorsers of the policy are required to produce the same result (i.e., identical readset and writeset). The client then creates a transaction and passes it to the ordering service. 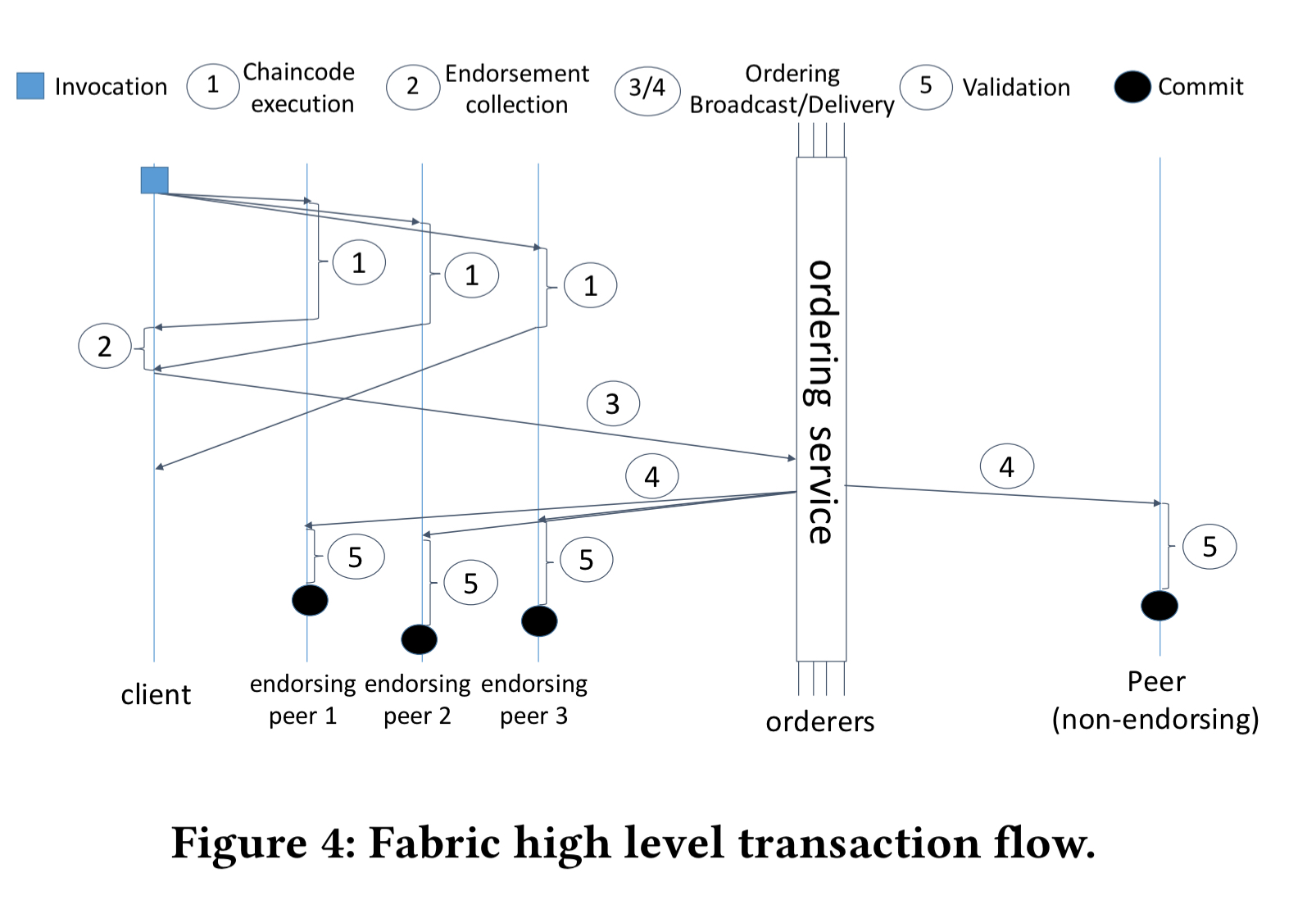 Note that under high contention for certain keys, it is possible for endorsers to return different results and the proposal will fail. “We consciously adopted this design, as it considerably simplifies the architecture and is adequate for typical blockchain applications.” In the future CRDTs may be supported to enhance the liveness of Fabric under contention.

Executing a transaction before the ordering phase is critical to tolerating non-deterministic chaincodes. A chaincode in Fabric with non-determinism can only endanger the liveness of its own operations, because a client might not gather a sufficient number of endorsements for instance.

When a client has assembled enough endorsements it submits a transaction to the ordering service.

The ordering phase establishes a total order on all submitted transactions per channel. In other words, ordering atomically broadcasts endorsements and thereby establishes consensus on transactions, despite faulty orderers. Moreover, the ordering service batches multiple transactions into blocks and outputs a hash-chained sequence of blocks containing transactions.

The ordering service is not involved in maintaining any blockchain state, and does not validate or execute transactions. Thus the consensus mechanism is completely separated from execution and validation and can be made pluggable (for example using crash-fault tolerant – CFT – or Byzantine fault tolerant – BFT – consensus algorithms).

Blocks are delivered to peers either directly by the ordering service or via gossip. Validation then consists of three sequential steps:

The ledger of Fabric contains all transactions, including those that are deemed invalid. This follows from the overall design, because the ordering service, which is agnostic to chaincode state, produces the chain of the blocks and because the validation is done by peers post-consensus.

Section 4 in the paper contains a number of interesting implementation details for the various components. In the interests of space, I’m going to focus here on the ledger itself and on chaincode execution.

Chaincode is executed in a container which isolates chaincodes from each other and from the peer, and simplifies chaincode lifecycle. Go, Java, and Node.js chaincodes are currently supported. Chaincode and the peer communicate using gRPC. Special system chaincodes which implement parts of the Fabric itself run directly in the peer process.

Through its modularity, Fabric is well-suited for many further improvements and investigations. Future work will address (1) performance by exploring benchmarks and optimizations, (2) scalability to large deployments, (3) consistency guarantees and more general data models, (4) other resilience guarantees through different consensus protocols, (5) privacy and confidentiality for transactions and ledger data through cryptographic techniques, and much more.