This paper takes a fresh look at the issue of isolation levels, a topic we’ve looked at before and which contains quite a bit of complexity. The gold standard reference for understanding isolation is Adya’s Generalized isolation level definitions. Unlike the definitions that went before, Adya strove to give portable isolation level definitions that were not based on a given implementation technique. Adya defines isolation levels according to properties of directed serialisation graphs constructed over execution histories. If you’re actually trying to build an application (i.e., use a database), Crooks et al. argue that these graphs aren’t the most natural way to think about what’s going one.

From a programmer’s perspective, isolation guarantees are contracts between the storage systems and their clients, specifying the set of behaviours that clients can expect to observe – i.e., the set of admissible values that each read is allowed to return. When it comes to formally defining these guarantees, however, the current practice is to focus, rather than on the values that the clients can observe, on the mechanisms that can produce those values – i.e., histories capturing the relative ordering of low-level read and write operations.

So the authors set out to build a new model expressing isolation guarantees as properties of state that applications can observe. However you come at it, there are of course going to be some similarities – Adya’s phenomena I find in many cases to be quite succinct expressions of states I may observe, and the sequence of states Crooks et al. want us to reason about have a certain graph-like structure if you squint just right. In fact, selecting Adya’s model as baseline, the authors prove that their definitions are equivalent to his. The state based model turns out to have some nice properties:

Ultimately, the insights offered by state-based definitions enable us to organize in a clean hierarchy what used to be incomparable flavours of snapshot isolation.

be a mapping from a set of keys

to a set of values

. Initially the system starts out with every key mapped to the special undefined value,

is an ordered set of read and write operations. A read operation

to the new value

If we start with the system in some state

, we end up with a new state in which the only differences are that the writes from T have been applied. (For simplicity, a transaction is assumed to write a key only once). In the notation developed in the paper, this is written as

. A series of zero or more such state transitions from an initial starting state

So far so good. Now we need to grapple with the concept of an execution. Given a set of transactions,

is the sequence of states

in some order. So one execution might be “we start out in the initial state and then apply

in that order,” and other execution for the same transaction set might be “we start out in the initial state and then apply

Here’s the subtle thing it took me a few readings to fully grasp. Take the order

again for a moment. There is no requirement that the state a given transaction sees be the immediately preceding state in the execution. So for

it could be seeing the initial state, the state after applying

, or the state after applying

. Since a read operation

that is seen in response to a read of the key

we do have some constraints: the value

returned from the read must be compatible with the value of

in the state from which the operation reads. The subset of states in the execution for which this condition holds are called the read states. To put it another way, the read states of an operation are all of the states it could possibly have read from given the value that it actually observed.

We need a picture! Take four transactions with read and write operations as follows:

We start out in the initial state,

For this execution, we’ll say that

is applied first. Since it can only read from the initial state, we inevitably end up with:

goes next, taking us to state

and then it’s the turn of

(Note that these first three transactions handily didn’t include any read operations!). Next up in the execution is

. This does contain read operations, two of them. Operation

. The only possible read state for

. The possible read states for this operation (states in which

The read precondition predicate, PREREAD, holds for a transaction if all the read operations in the transaction have a non-empty read set. That is, every read seen by the transaction was at least possible according to our rules so far! In the example above,

holds since the read set is non-empty for both reads. The PREREAD predicate holds for an entire execution if it holds for every transaction in the execution.

For a given transaction

is said to be complete if every operation in

is in the read set of every operation in

). We denote this as

. In our running example, the only complete state for transaction

. There is no guarantee that a complete state will exist for any given transaction.

OK! That was a lot of definitions, but now it’s payback time. Given our state-based model, we can use it to express isolation models as constraints on permissible read states for read operations, and parent states for transactions. The set of constraints that define an isolation guarantee are called its commit tests.

Let’s start with a simple one: serializability.

Serializability requires the values observed by the operations in each transaction T to be consistent with those that would have been observed in a sequential execution.

If we want strict serializability we need to add one more commit test condition. We say that transaction

if the commit time of

is less than the start time of

starts). The extra condition is this: if

What about read committed? We know this is weaker that serializability, but how exactly?

Read committed allows T to see the effects of concurrent transactions, as long as they are committed. The commit test therefore no longer constrains all operations in T to read from the same state; instead it only requires each of them to read from a state that precedes T in the execution e.

The commit test for read committed is simply PREREAD!

(In read uncommitted btw. pretty much anything goes, and the commit test adds no further constraints over the base model).

Snapshot isolation is like serializability, but drops the commit test requirement that the complete state a transaction reads from be its parent state. Other transactions may commit in-between, so long as the effects of those transactions are not observed. This leads to two commit test conditions:

Going back to our example,

is a complete state for

. Under snapshot isolation we would be allowed to extend our execution with

following (having as its parent state)

, but under serializability we would not.

Here’s a summary table of the commit tests we’ve looked at so far, and a couple that we haven’t discussed yet:

The client-centric definition of PSI makes it clear that operations do not necessarily observe a complete state. See section 4 in the paper for full details and for the read atomic discussion.

A fresh perspective on isolation levels

The client perspective shows that snapshot-based guarantees differ on three dimensions: time (logical or real); snapshot recency; and state completeness. The result is a hierarchy that looks like this: 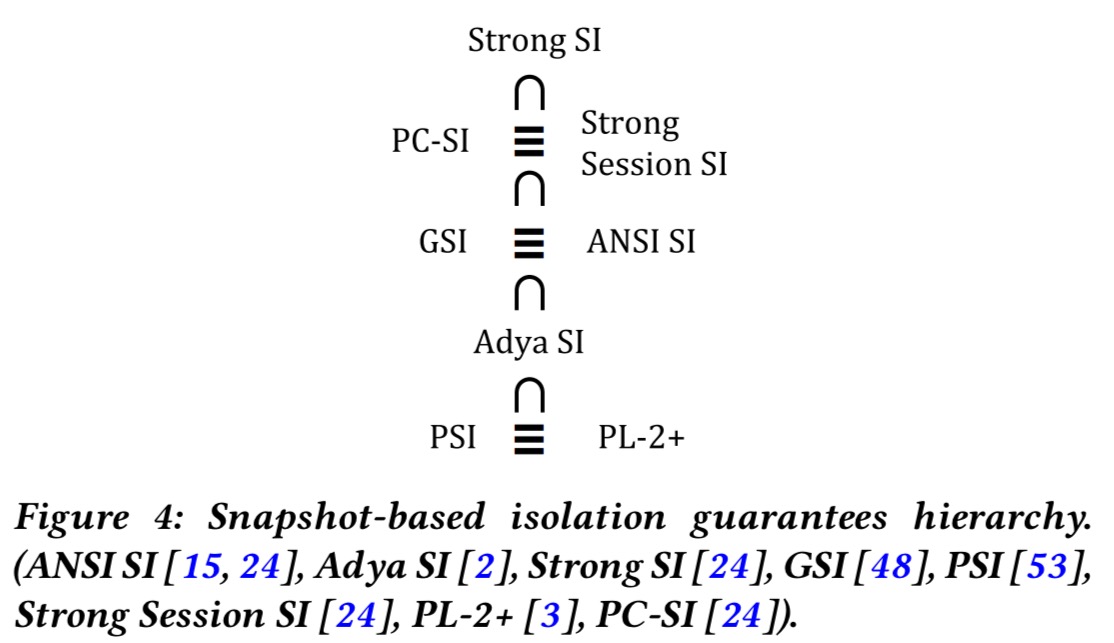 As you move from the top to the bottom of the hierarchy, implementation scalability improves, as can be seen in the reducing commit test conditions below. See section 5.2 in the paper for a good discussion on this, which space precludes me from covering here.

Using the insights gained from focusing only on observable differences to clients, the authors realised that the history-based definition of PSI requiring a total commit order across all transactions in a datacenter, even across different keys, was overly restrictive. The ‘true’ dependencies need only be those observable to the application (causal?). The authors tested the potential performance improvements this could realise using the TARDiS key-value store:

On a workload consisting of read-write transactions (three reads, three writes) accessing data uniformly over 10,000 objects, we found that a client-centric approach decreased dependencies, per transaction, by two orders of magnitude (175x), a reduction that can yield significant dividends in terms of scalability and robustness.

Details are in section 5.3.