With thanks to Glyn Normington for pointing this paper out to me.

Earlier this year we looked at ‘System programming in Rust: beyond safety‘ which made the case for switching from C to Rust as the default language of choice for system-level programming. Today’s paper is in the same vein, but focuses on pragmatic incremental updates to existing C-based systems by looking at their use of parsing code. Why parsers? Because they are often manipulating untrusted data that can be controlled by a hacker…

Unfortunately, data parsing is often done in a very unsafe way, especially for network protocols and file formats… Today, many applications embed a lot of parsers that could be targeted: web browsers like Firefox or Chrome, media players (VLC), document viewers, etc..

There are many examples of parser related bugs and vulnerabilities (see e.g. Cloudbleed for a recent one), and they keep on coming.

After years of code auditing, publishing and teaching good practice and still finding the same problems, we must admit that current methods do not work.

If current methods aren’t working, what are we to do? Chifflier & Couprie have a two part solution for us:

The goal is to take an existing C (or C++) program and replace its existing parser(s) with one(s) offering better security, without disturbing the rest of the application. And if you haven’t guessed yet, that better parser implementation is going to be written in Rust.

The programming language you choose to use has a big impact on the security of the resulting software. “Mind your language(s): A discussion about languages and security” makes a strong case for this. That paper also opens with a quote that I can’t resist repeating here:

An unreliable programming language generating unreliable programs constitutes a far greater risk to our environment and to our society than unsafe cars, toxic pesticides, or accidents at nuclear power stations. Be vigilant to reduce that risk, not to increase it. – C.A.R Hoare

By using a safe programming language, responsibility for whole classes of security related issues moves from the developer to the compiler. In their search for a better language, the authors looked for:

In the end, they settled on Rust for the following reasons:

Changing the language is important, but it is not enough. Another component is required to help fix logical bugs, and make sure parsers are both easier to write and do not contain errors.

Many low-level parsers ‘in the wild’ are written by hand, often because they need to deal with binary formats, or in a quest for better performance. Often these end up with hard to maintain code. At the other end of the spectrum there are parser generators, which tend to produce parsers of good quality but still present challenges in writing the grammar and integrating context specific libraries.

In between these two choices lie parser combinators.

Parser combinators propose a middle ground between hand-written parsers and generated parsers. They are made of small functions that handle basic parts of a format, like recognizing a word in ASCII characters or a null byte. Those functions are then composed in more useful building blocks like the pair combinator that applies two parsers in sequence, or the choice combinator that tries different parsers until one of them succeeds.

The functions are completely deterministic and hold no mutable state. The deterministic behaviour of parser combinators simplifies writing the state machine that manages data accumulation.

The underlying idea of nom stems from Rust’s memory handling. Since the compiler always knows which part of the code owns which part of the memory, and Rust has a slice type (a wrapper over a pointer and a size) that represents data borrowed from somewhere else, it is possible to write a parser that will never copy input data. It will instead only return generated values or slices of its input data. This approach has the potential to make efficient parsers.

With stateless parsers that don’t need ownership of the input data, it becomes relatively easy to write the parser in nom, add unit tests in Rust, and then call into Rust from C.

… it seems more reasonable and pragmatic to try to change only a small part of the initial software, without affecting the rest. For example, replacing a parser (ideally, only one function in the initial code) by its safe version, recoded in the new language.

For incremental adoption, integration into the host system needs to be as painless as possible. Fortunately, parser modules offer the triple benefits of a small interface to the rest of the system, normally not directly modifying the application’s state, and being high value targets for security upgrades. The recommended approach is as follows:

That just leaves the small matter of the build system:

Integrating the Rust code in the build system is a large part of the work needed. While it is not especially hard, it requires fixing a lot of details, like passing the platform triplets between compilers, setting up the right paths for intermediary or final objects, ordering the build of components and linking them.

The paper contains two case studies: replacing the FLV parser in the VLC media player, and writing a safe TLS parser for the Suricata IDS. This led to the Rusticata project (https://github.com/rusticata/rusticata), containing implementations of fast and secure parsers in Rust, together with a simple abstraction layer to use them in Suricata. Rustica is compiled as a shared library exposing C functions. 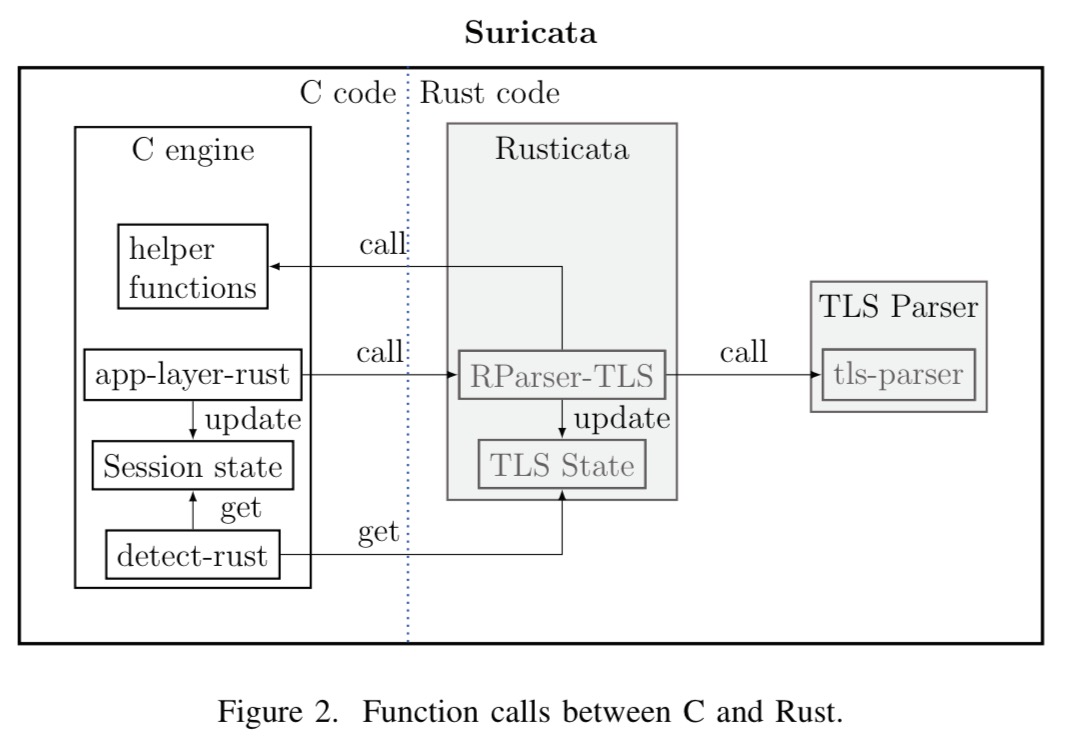 To avoid duplicating support functions such as logging, alerting, and so on, pointers to the requisite C functions are wrapped and passed to the Rust code.

For an interesting comparison to the Rustica TLS parser effort, see ‘Not quite so broken TLS‘ that we looked at last on The Morning Paper last year.

The appendix contains an interesting analysis of the code generated by Rust compiler. Most things look good, but of note is the fact that the Rust code has no protection activated for the stack:

Admittedly, the generated code is supposed not to contain any overflow thanks to the compiler checks, but it is a bit sad that a well-established function integrated to LLVM is not used, even if the integration causes some difficulties (tracked in Rust issue #15179). That also means that a Rust library loaded from a C executable will provide ROP gadgets. Hopefully, the library supports ASLR, but this is not satisfactory, and could be improved in the future