Another paper, another set of state-of-the-art results, this time with 1st place on the ILSVRC 2015 classification tasks (beating GoogLeNet from the year before), as well as 1st place on ImageNet detection, ImageNet localisation, COCO detection, and COCO segmentation competitions. For those of you old enough to remember it, there’s a bit of a Crocodile Dundee moment in this paper: “22 layers? That’s not a deep network, this is a deep network…” How deep? About 100 layers seems to work well, though the authors tested networks up to 1202 layers deep!! Which begs the question, how on earth do you effectively train a network that is hundreds or even a thousand layers deep?

Driven by the significance of depth, a question arises: Is learning better networks as easy as stacking more layers?

No, it’s not. A degradation problem occurs as network depth increases, accuracy gets saturated, and then degrades rapidly as further layers are added. So after a point, the more layers you add, the worse the error rates. For example: 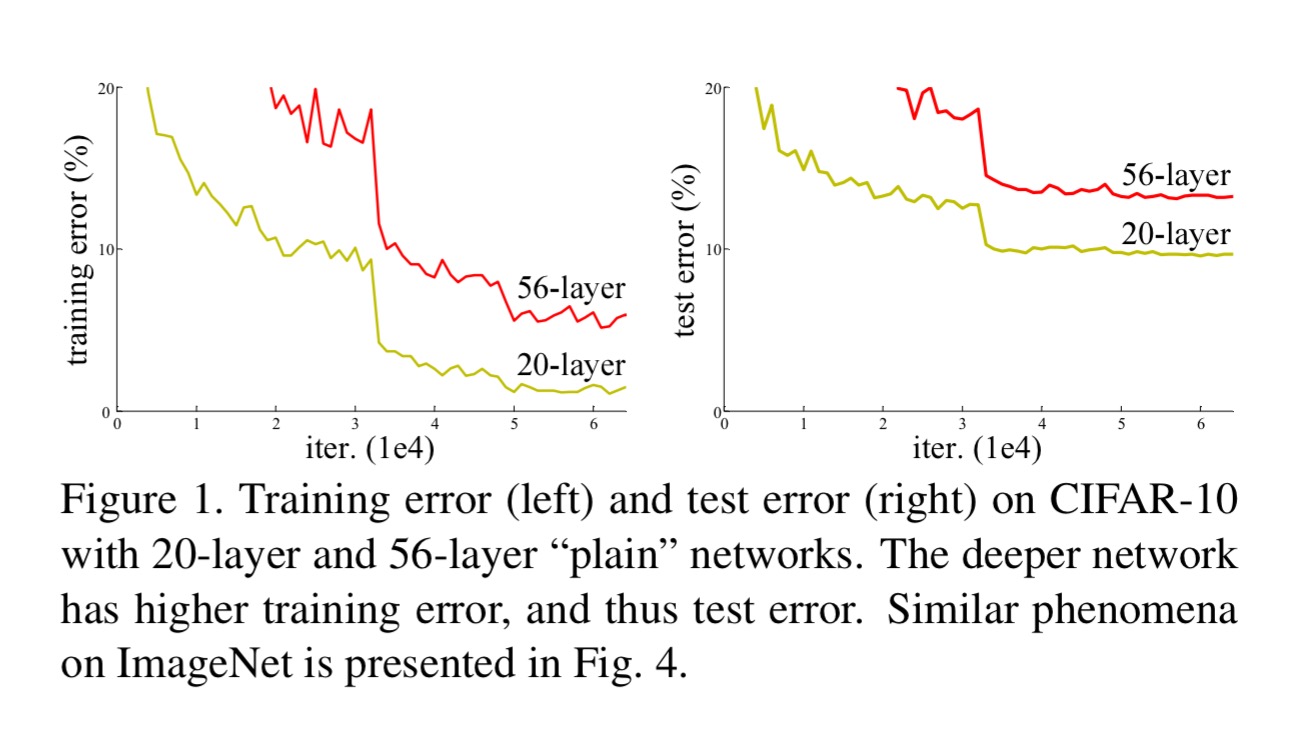 An interesting thought experiment leads the team to make a breakthrough and defeat the degradation problem. Imagine a deep network where after a certain (relatively shallow) number of layers, each additional layer is simply an identity mapping from the previous one: “the existence of this constructed solution indicates that a deeper model should produce no higher training error than its shallower counterpart.”

Suppose the desired mapping through a number of layers for certain features really is close to the identity mapping. The degradation problem suggests that the network finds it hard to learn such mappings across multiple non-linear layers. Lets say the output of one layer is

. Now skip forward three layers in the network and imagine that we’d like the ability to easily learn an identity mapping (or close to) for some elements of 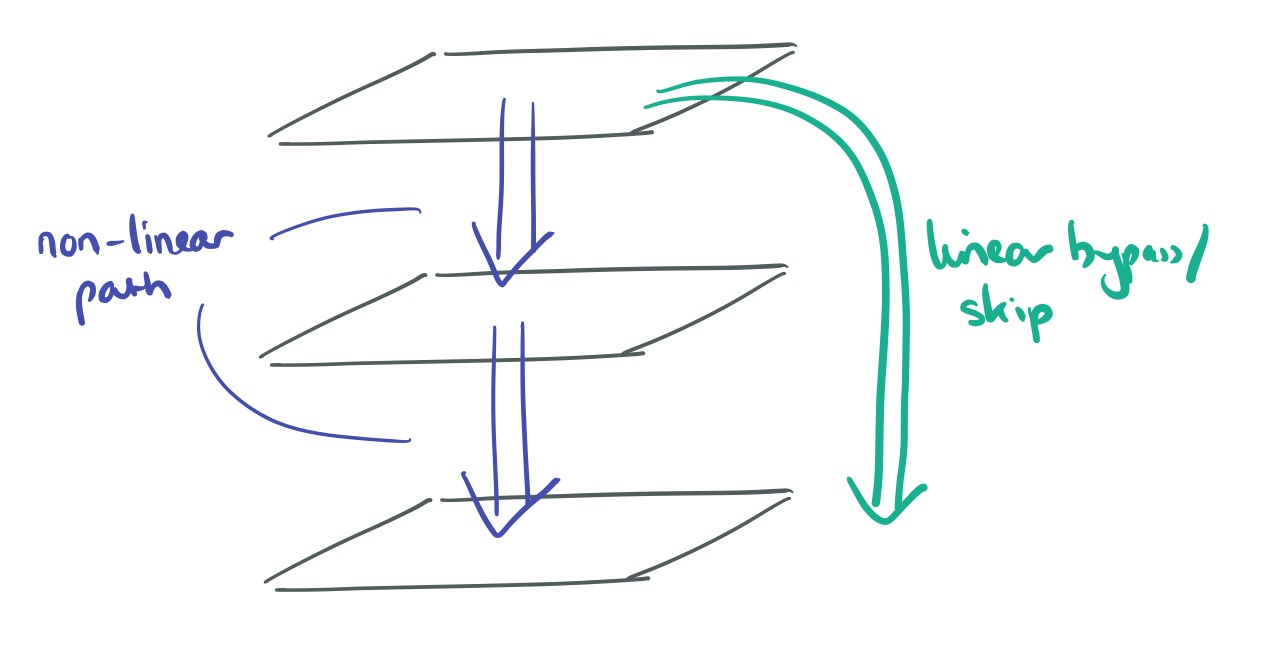 But we don’t want to just double the width of the receiving layer, and for some other elements of

perhaps we do want to learn some non-linear function. So here comes the clever part: suppose the ideal function we could learn is

. If the intervening hidden layers can learn that then they can also learn

. Maybe you can see where this is going: we can now simply combine the output of the previous layer with

using simple addition and we get

! But constructing things in this way though, we make it easy for the network to include both non-linear elements and also near identity elements (by learning weights close to zero). 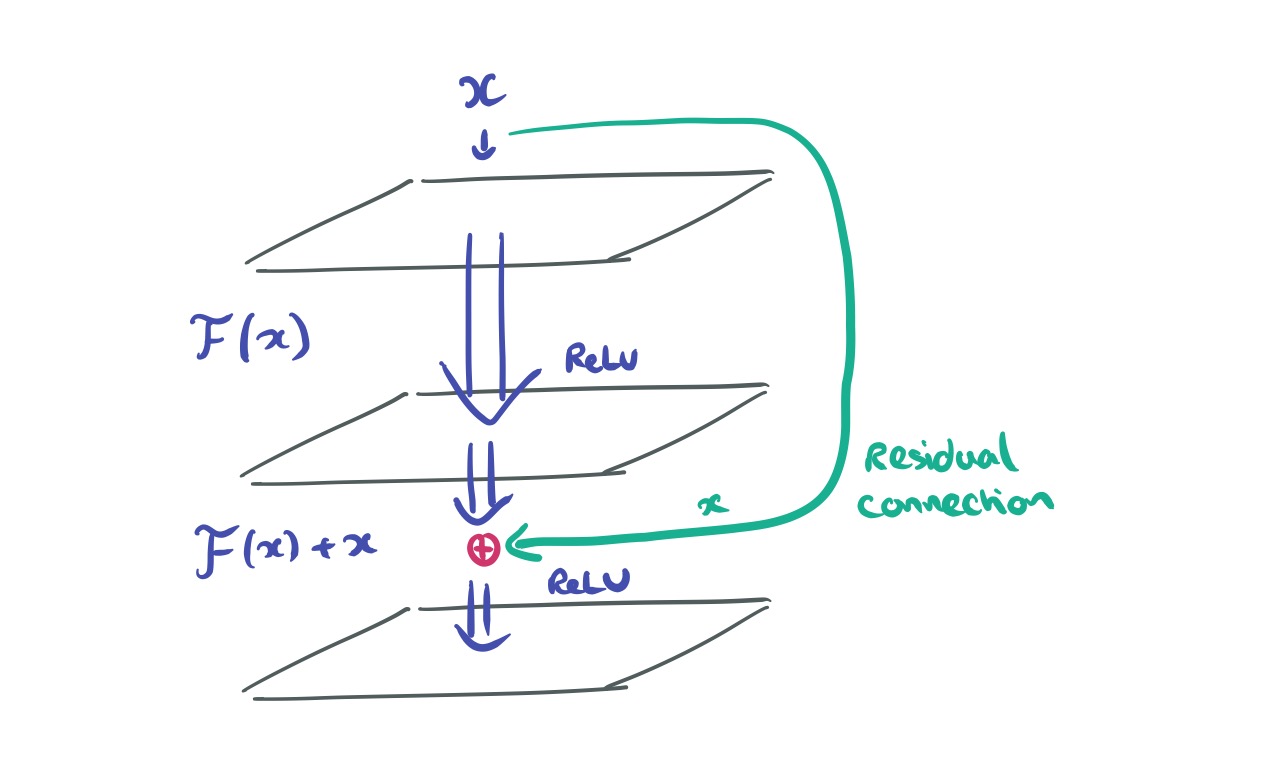 Here are 18 and 34 layer networks trained on ImageNet without any residual layers. You can see the degradation effect with the 34 layer network showing higher error rates. 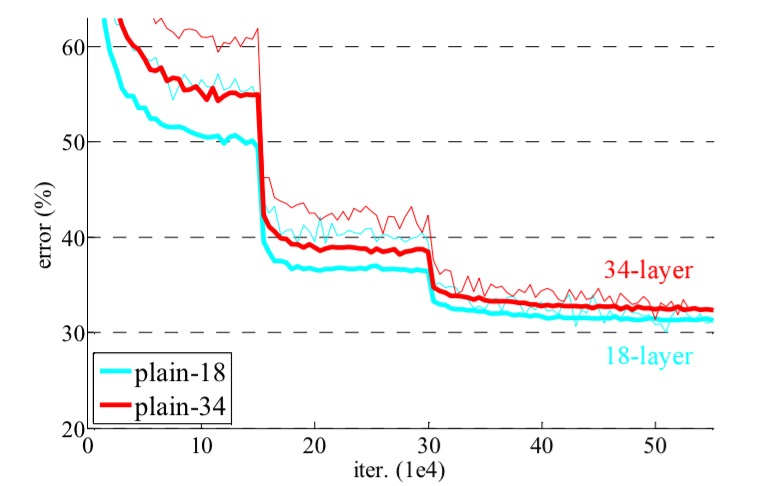 Take the same networks and pop in the residual layers, and now the 34-layer network is handsomely beating the 18-layer one. 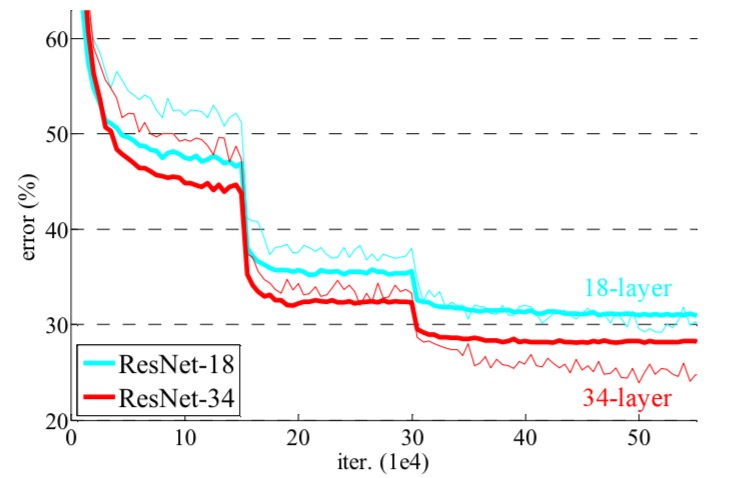 Here are the results all the way up to 152 layer networks: 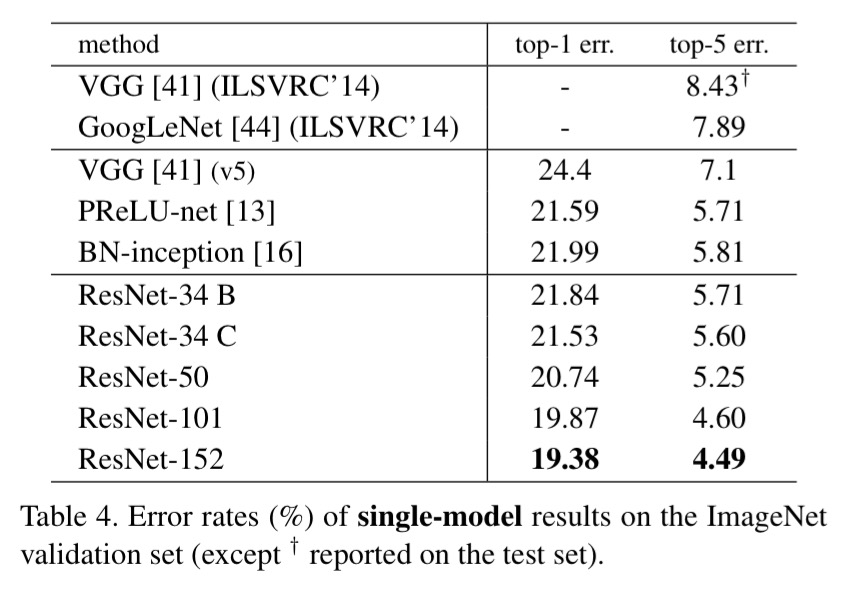 This paper analyses the skip-layers introduced in the residual networks (ResNets) that we just looked at to see whether the identity function is the best option for skipping. It turns out that it is, and that using an identity function for activation as well makes residual units even more effective.

Recall that we used

as the input when skipping layers. More generally, this is

where h is the identity function. But h could be also be another kind of function – for example constant scaling. The authors try a variety of different h functions, but identity works best. When we consider the activation function f as well (the original paper used ReLU) then we have

. Things work even better when f is also an identity mapping (instead of ReLU).

To construct an identity mapping f, we view the activation functions (ReLU and Batch Normalization) as “pre-activation” of the weight layers, in contrast to conventional wisdom of “post-activation”. This point of view leads to a new residual unit design, shown in Fig 1(b). 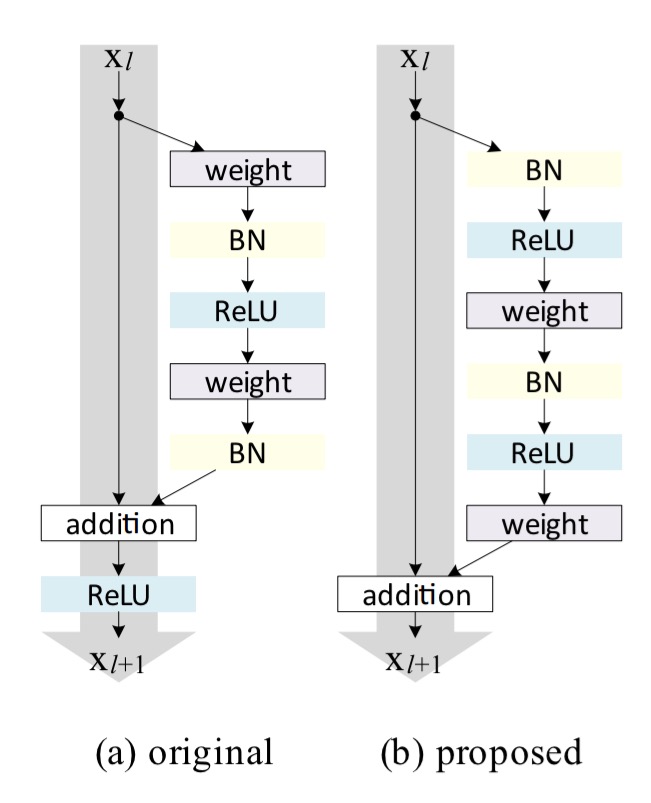 Making both h and f identity mappings allows a signal to be directly propagated from one unit to any other units, in both forward and backward passes. 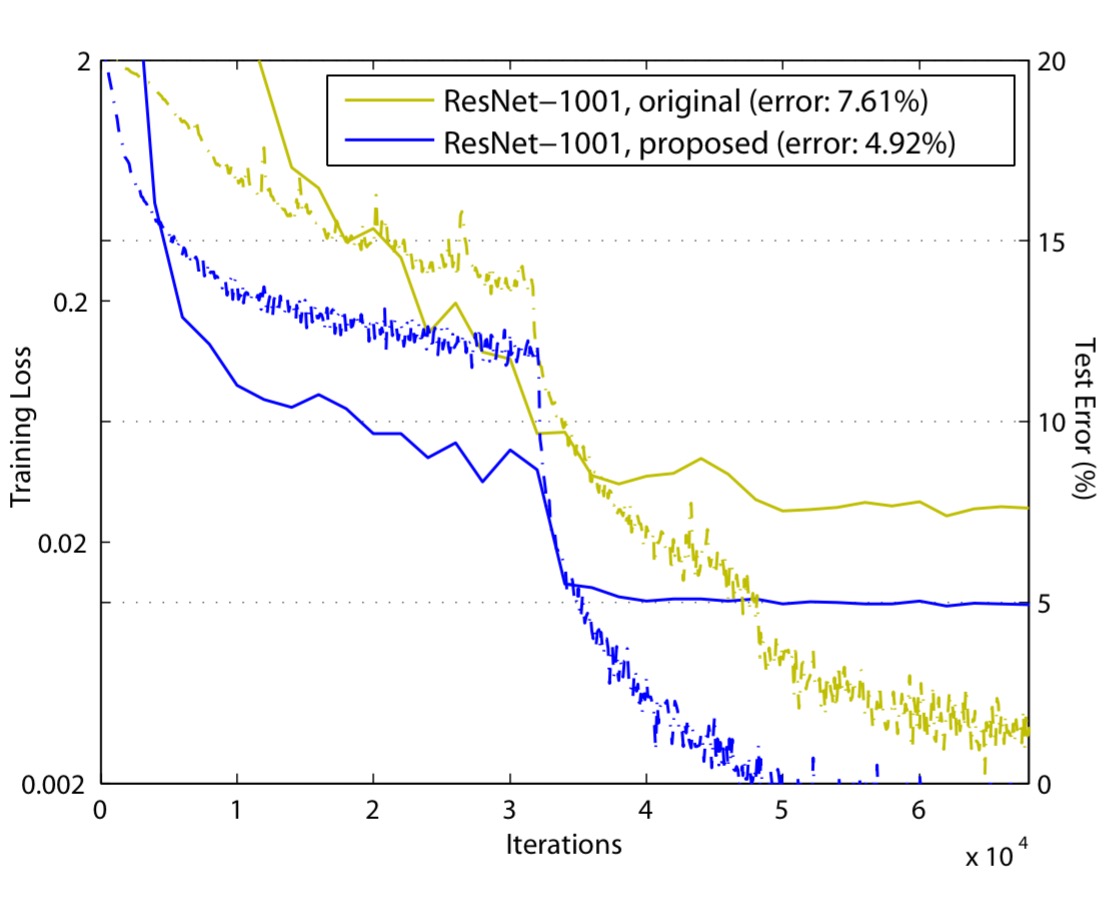 Based on this unit, we present competitive results on CIFAR-10/100 with a 1001-layer ResNet, which is much easier to train and generalizes better than the original ResNet. We further report improved results on ImageNet using a 200-layer ResNet, for which the counterpart of [the original ResNet] starts to overfit. These results suggest that there is much room to exploit the dimension of network depth, a key to the success of modern deep learning.

Inception-v4, inception-resnet and the impact of residual connections or learning 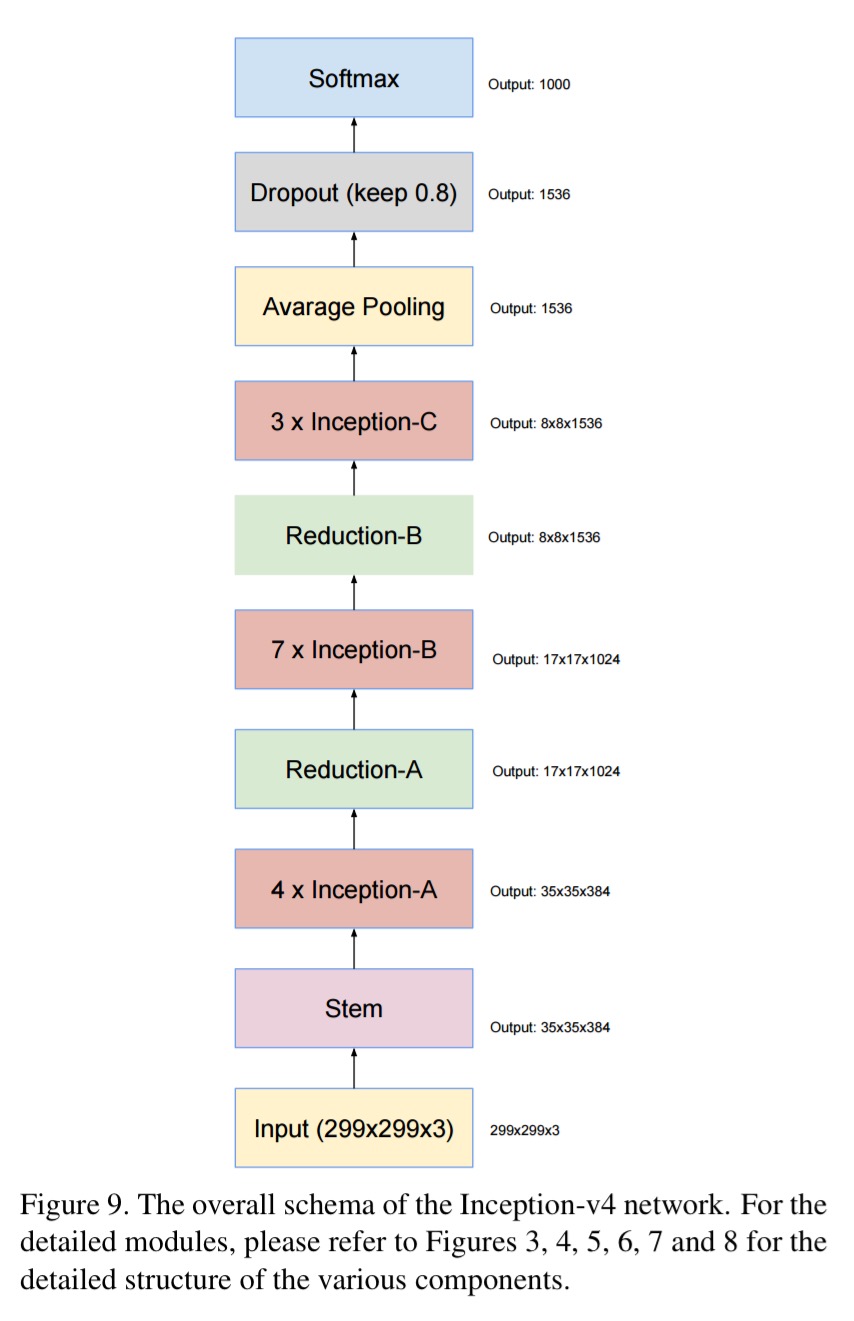 And as a representative selection, here’s what you’ll find if you dig into the stem module: 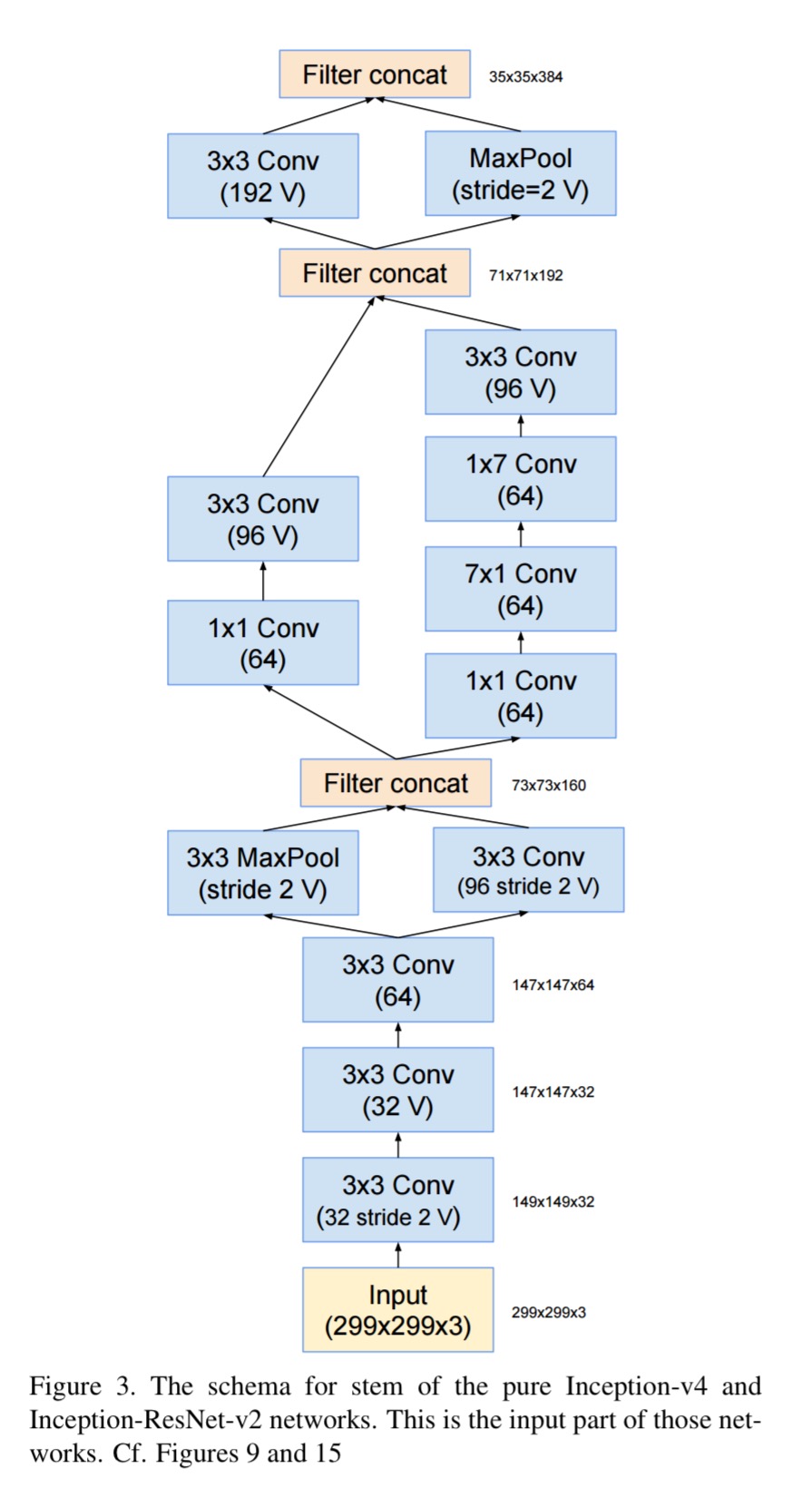 Since Inception 4 and Inception-ResNet-v2 (Inception 4 with residual connections) give overall very similar results, this seems to suggest that – at least at this depth – residual networks are not necessary for training deep networks.

However, the use of residual connections seems to improve the training speed greatly, which is alone a great argument for their use. 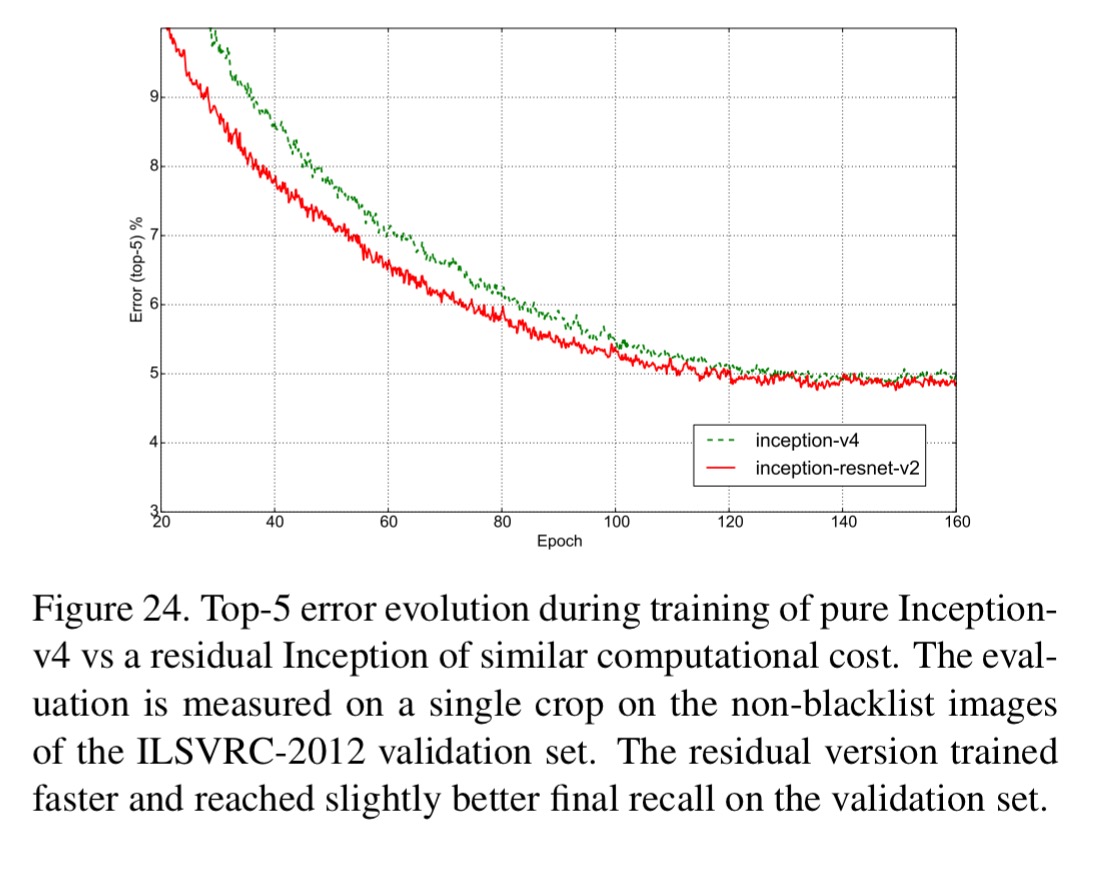 Both the Inception v4 and Inception ResNet-2 models outperform previous Inception networks, by virtue of the increased model size.

This paper comes a little out of order in our series, as it covers the Inception v3 architecture. The bulk of the paper though is a collection of advice for designing image processing deep convolutional networks. Inception v3 just happens to be the result of applying that advice.

In this paper, we start with describing a few general principles and optimization ideas that proved to be useful for scaling up convolution networks in efficient ways.

Although these principles might make sense, it is not straightforward to use them to improve the quality of networks out of the box. The idea is to use them judiciously in ambiguous situations only. 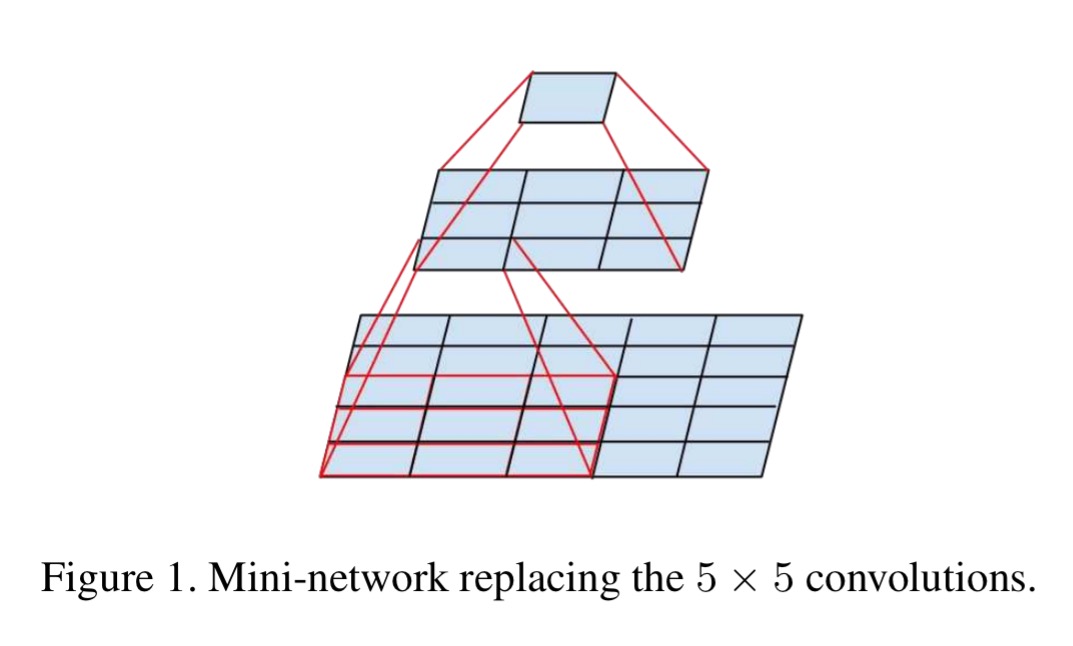 The above results suggest that convolutions with filters larger 3 × 3 a might not be generally useful as they can always be reduced into a sequence of 3 × 3 convolutional layers. Still we can ask the question whether one should factorize them into smaller, for example 2×2 convolutions. However, it turns out that one can do even better than 2 × 2 by using asymmetric convolutions, e.g. n × 1. For example using a 3 × 1 convolution followed by a 1 × 3 convolution is equivalent to sliding a two layer network with the same receptive field as in a 3×3 convolution. The two-layer solution is 33% cheaper. 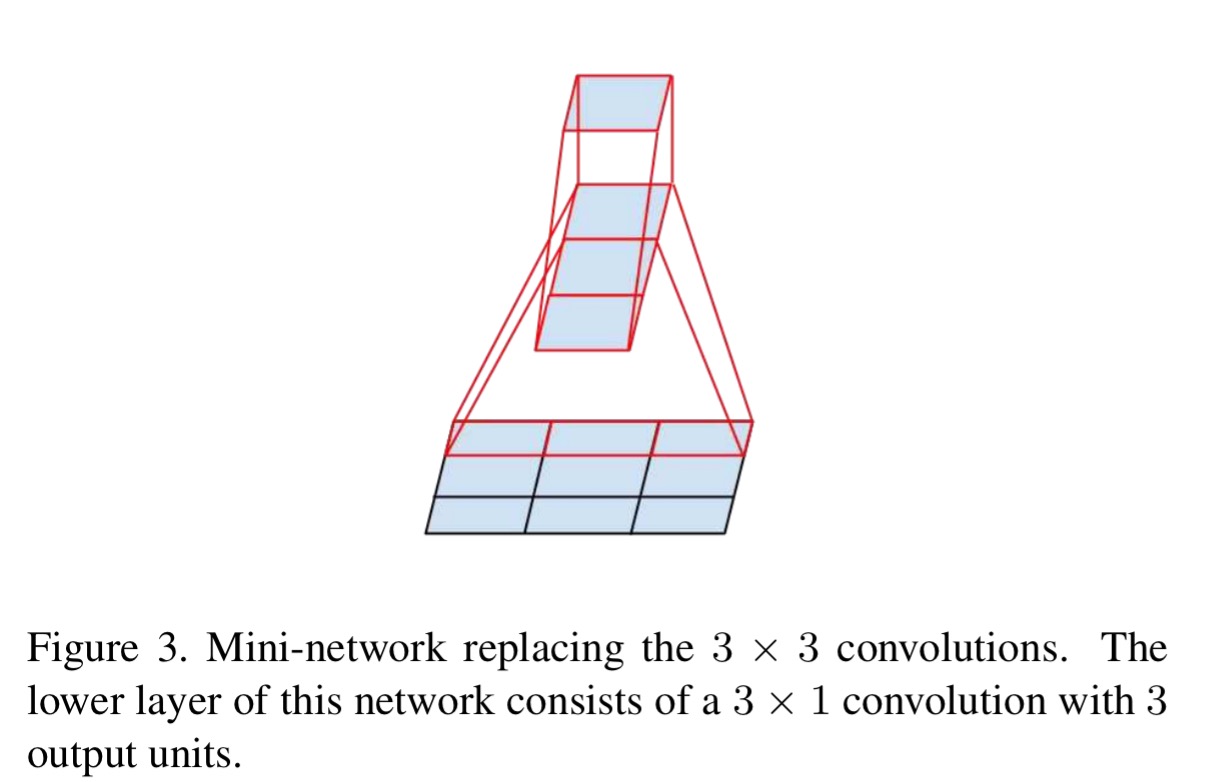 Together with the earlier observation in the previous paragraph, this means that original the hypothesis of [Inception] that these branches help evolving the low-level features is most likely misplaced. Instead, we argue that the auxiliary classifiers act as regularizer.

There are several other hints and tips in the paper that we don’t have space to cover. It’s well worth checking out if you’re building these kinds of models yourself.