I’m really impressed with this paper – it covers all the bases from user studies to find out what’s really important to end users, to data-driven engineering, a sprinkling of algorithms, a pragmatic implementation being made available in open source, and of course, impactful results. If I was running a big-data cluster, I’d definitely be paying close attention!  Morpheus is a cluster scheduler that optimises for user satisfaction (we don’t see that often enough as a goal!), and along the way makes up to an order-of-magnitude reduction in the number of jobs that miss their deadlines while maintaining cluster utilisation and lowering cluster footprint by 14-28%.

In this paper, we present Morpheus, a system designed to resolve the tension between predictability and utilization—that we discovered thorough analysis of cluster workloads and operator/user dynamics. Morpheus builds on three key ideas: automatically deriving SLOs and job resource models from historical data, relying on recurrent reservations and packing algorithms to enforce SLOs, and dynamic reprovisioning to mitigate inherent execution variance.

What do users of big data clusters care about?

The team gathered some very interesting insights into what goes on in (Microsoft’s ?) big data clusters by a process of:

The findings are fascinating in their own right.

Based on interviews with cluster operators and users, we isolate one observable metric which users care about: job completion by a deadline. Specifically, from analysing the escalation tickets, some users seem to form expectations such as: “95% of job X runs should complete by 5pm”. Other users are not able to specify a concrete deadline;  but do state that other teams rely on the output of their job, and may need it in a timely manner. 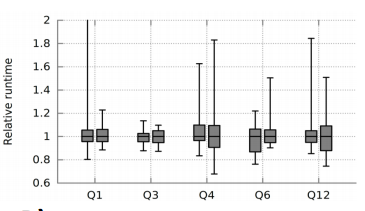 This is notable, because even seemingly minor hardware differences can impact job runtime significantly – e.g., 40% difference in runtime on SKU1 vs SKU2 for a Spark production job.

Even an optimal static tuning is likely going to drift out of optimality over time.

Based on their findings, the team concluded that:

Given a job that is periodically submitted by a user (with manually provisioned resources), Morpheus quietly monitors the job over time and captures:

Following a number of successful runs of the job, an SLO inference component performs an offline analysis. Using the provenance graph it determines a deadline for completion, the SLO (Service Level Objective), and using the skylines it determines a model of the job resource demand over time.

At this point, the system is ready to take over resource provisioning for the job, but before it does so:

The user signs-off (or optionally overrides) the automatically-generated SLO and job resource model.

(Wouldn’t that be great as a user, to know that the system is going to monitor and try to honour an SLO for your jobs!).

Morpheus then uses recurring reservations for each managed job. These set aside resources over time for running the job, based on the job resource model, and each new instance of the job runs using these dedicated resources.

To address variability, a dynamic reprovisioning component monitors job progress online and adjusts the reservation in real-time to mitigate the inherent execution variability.

Job runs continue to be monitored to learn and refine the SLO and job resource model over time.

Petabytes of logs gathered daily across the production environments are processed to create a “semantically rich and compact (few TBs!) graph representation of the raw logs.”

This representation gives us a unique vantage point with nearly perfect close-world knowledge of the meaningful events in the cluster.

We say that a job has an actionable deadline if its output is consumed at an approximately fixed time, relative to the start of the period (e.g., everyday at 4pm), and if there is a non-trivial amount of slack between the job end and the deadline. 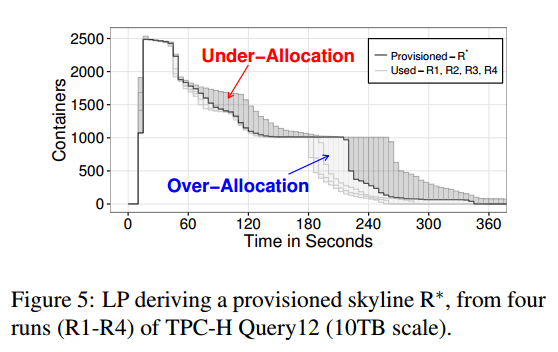 With all the requirements collected, a packing algorithm called LowCost is used to match jobs to resources.  LowCost allocates containers to all periodic jobs, such that their requirements are met by the deadline, and at the same time it tries to minimize waiting time for non-periodic ad-hoc jobs. The overall objective of LowCost is to minimise the maximum total allocation over time. It does so following a greedy procedure which places containers iteratively at cost-efficient positions.

These issues are dealt with by the dynamic reprovisioning algorithm (DRA). DRA continuously monitors the resource consumption of a job, compares it with the resources allocated in the reservation and ‘stretches’ the skyline of resources to accommodate a slower-than-expected job execution.

In a simulation run from the largest dataset available to the team, Morpheus was able to automatically derive SLOs for over 70% of the millions of instances of periodic jobs in the trace. (The remainder don’t have enough data – eg, they are weekly jobs and so only appear four times in the one-month trace). Compared to the current manual provisioning, Morpheus reduces worst-case SLO misses by 13x! The packing algorithm does a good job of driving utilisation at the same time, lowering the overall cluster cost. 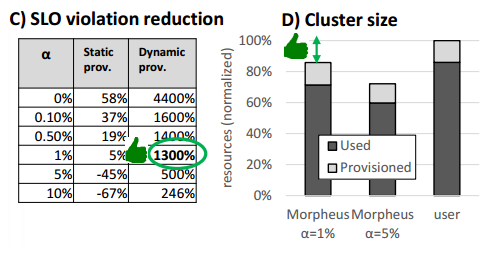 SLO extraction and packing contribute to lower the baseline cluster size by 6%.  Job resource modeling (using the extracted skyline rather than user supplied provisioning) lowers cluster size by a further 16%.  Combined they give a 19% reduction.

By turning on/off our dynamic reprovisioning, we can either (1) match the user utilization level and deliver 13x lower violations, or (2) match the current SLO attainment and _reduce cluster size by over 60% (since we allow more aggressive tuning of the LP, and repair underallocations dynamically).