Formal methods may not be appropriate in all cases, but there are some places where the rigour they introduce can be a really good idea. Security is one of those places. In today’s paper from CCS ’16 Fett et al. create a formal model of OAuth 2.0, and through this process identify four vulnerabilities in a protocol that’s been widely adopted and deployed, and plays an increasingly important role on the web. All of these were reported to the OAuth and OpenID Connect working groups who confirmed the attacks. In addition to finding existing vulnerabilities, the authors also propose relatively simple fixes to prevent them, and prove that with these alterations, OAuth provides the desired authorisation, authentication, and session integrity properties.

In this paper, we carry out the first extensive formal analysis of the OAuth 2.0 standard in an expressive web model. Our analysis aims at establishing strong authorisation, authentication, and session integrity guarantees, for which we provide formal definitions.

This particular version of the paper doesn’t actually contain the model itself, nor the formal proofs. For that, see the 95-page technical report version of the same.  But it does describe the approach that they took, and the main results. For most of us, that’s probably a pretty good compromise.

The OAuth model is built on top of the FKS model of the web, in the general Dolev-Yao style (in case you were wondering 😉 ).  The FKS model mimics published (de-facto) standards and specifications for the web, including HTTP/1.1 and HTML5. It defines a general communication model, and based on it, web systems consisting of web browsers, DNS servers, and web servers as well as web and network attackers. On top of this Fett at al. build an OAuth model that includes all of the configuration options of OAuth and all four OAuth modes (more on those in a minute).

To prove the security properties of OAuth, our model includes the fixes against the new attacks presented in section 3 as well as standard mitigations against known attacks. Altogether, this offers clear implementation guidelines, without which OAuth would be insecure.

Based on this model, they prove the following results:

Remember these guarantees only hold if a standard list of precautions have been taken (I’ll cover those later), and fixes for the four identified vulnerabilities are in place. The status of those fixes in the wild is a little uncertain from my reading of the paper:

We reported all attacks to the OAuth and OpenID Connect working groups who confirmed the attacks. The OAuth working group invited us to present our findings to them and prepared a draft for an RFC that mitigates the IdP mix-up attack (using the fix described in Section 3.2). Fixes regarding the other attacks are currently under discussion. We also notified nytimes.com, Facebook, and the developers of mod_auth_openidc and pyoidc.

(This for a paper presented two weeks ago).

OAuth was originally intended for authorisation, but is also commonly used for authentication. This latter use case is typically implemented by having the user authorise the RelyingParty to access a unique user identifier (resource) at the Identity Provider, which serves to log the user in.

Roughly speaking, in the most common modes, OAuth works as follows: If a user wants to authorize an RP to access some ofthe user’s data at an IdP, the RP redirects the user (i.e., the user’s browser) to the IdP, where the user authenticates and agrees to grant the RP access to some of her user data at the IdP. Then, along with some token (an authorization code or an access token) issued by the IdP, the user is redirected back to the RP. The RP can then use the token as a credential at the IdP to access the user’s data at the IdP.OAuth is also commonly used for authentication, although it was not designed with authentication in mind. A user can, for example, use her Facebook account, with Facebook being the IdP, to log in at the social network Pinterest (the RP). Typically, in order to log in, the user authorizes the RP to access a unique user identifier at the IdP. The RP then retrieves this identifier and considers this user to be logged in.

There are four modes in which OAuth can be used: 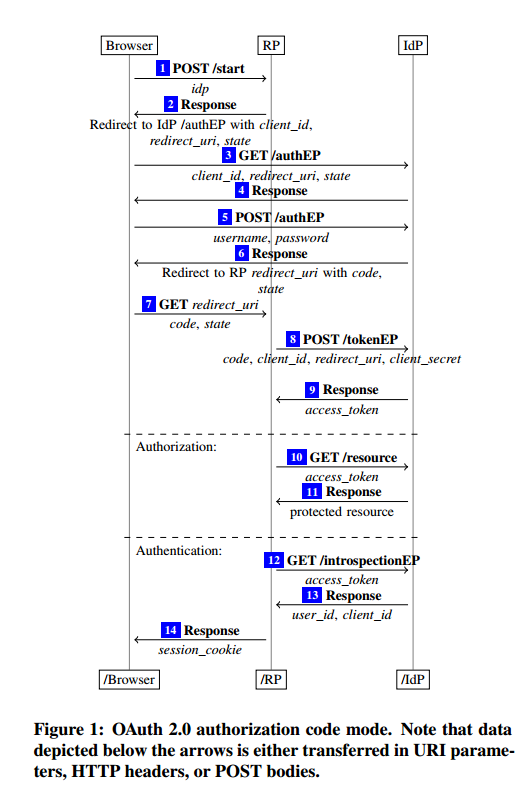 As mentioned in the introduction, while trying to prove the security of OAuth based on the FKS web model and our OAuth model, we found four attacks on OAuth, which we call 307 redirect attack, IdP mix-up attack, state leak attack, and naïve RP session integrity attack, respectively. In this section, we provide detailed descriptions of these attacks along with easily implementable fixes. Our formal analysis of OAuth (see Section 5) then shows that these fixes are indeed sufficient to establish the security of OAuth

At step 6 in the flow above the user has authenticated with the Identity Provider and the Identity Provider sends a redirect back to the user’s browser to send them onto the Relying Party site to continue their flow.  The OAuth standard permits any HTTP redirect mechanism available via the user-agent (it doesn’t have to be a 302).

If the Identity Provider happens to use a 307 redirect, the user’s browser will send a POST request to the Relying Party’s that contains all of the form data from the previous request, including the user credentials. An attacker running a malicious Relying Party can thus steal the credentials.

The only HTTP redirect code unambiguously defined to drop the the body of an HTTP POST request is a 303. So the fix is simply to always require 303 redirects.

The attacker confuses a Relying Party about which Identity Provider the user chose at the beginning of the login/authorisation process. It’s all downhill from there….

This attack applies to the authorization code mode and the implicit mode of OAuth when explicit user intention tracking is usedby the RP. To launch the attack, the attacker manipulates the first request of the user such that the RP thinks that the user wants to use an identity managed by an IdP of the attacker (AIdP) while the user instead wishes to use her identity managed by an honest IdP (HIdP). As a result, the RP sends the authorization code or the access token issued by HIdP to the attacker. The attacker then can use this information to login at the RP under the user’s identity (managed by HIdP) or access the user’s protected resources at HIdP.

A fundamental problem in the authorisation code and implicit modes of the OAuth standard is a lack of reliable information in the redirect in steps 6 and 7… our fix therefore is to include the identity of the Identity Provider in the redirect URI in some form that cannot be influenced by the attacker, e.g. using a new URI parameter.

The state leak attack enables an attacker to force a browser to be logged under the attacker’s name at a Relying Party, or force a Relying Party to use a resource of the attacker instead of a resource of the user. It enables what is often called session swapping, or login CSRF. It works by making the final redirect destination be a link to an attacker’s website, which will contain Referer headers with the full URI of the page the user was redirected to, including OAuth state and code. Authorization codes are single use, but state is not.

We suggest to limit state to a single use and to use the recently introduced referrer policies to avoid leakage of the state (or code) to the attacker… Our OAuth model includes this fix (such that only the origin is permitted in the Referer header for links on web pages of RPs/IdPs) and our security proof shows its effectiveness.

This attack also breaks the session integrity property. The attacker starts a session with an Honest Identity Provider and obtains a code or token for his or her own account. When a user wants to login to a RelyingParty using the attacker’s identity provider (perhaps substituted as before), they are sent back to the callback URL of the honest identity provider at the Relying Party, but using the attackers own (previously obtained) credentials.

The fix is always to use explicit user intention tracking.

(In other words, don’t just rely on the particular callback URL that gets invoked, but instead keep track of which one you are expecting to be used).

Preconditions for the OAuth guarantees

This post is too long already. But suppose you took care of the above four issues (none of them particularly difficult once you know of them), you’d also need the following in place to be sure of security: