Yesterday we looked at Shandian which promised faster web page load times, but required a modified client-side browser. Today we’re sticking with the theme of reducing page load times with Polaris. Unlike Shandian, Polaris works with unmodified browsers, and in tests with content from 200 sites out of the top Alexa 500 it is able to reduce load times by 34% at the median, and 59% at the 95th percentile.

To load a page, a browser must resolve the page’s dependency graph. The dependency graph captures “load-before” relationships between a page’s HTML, CSS, JavaScript, and image objects.

Consider a browser parsing an HTML file that encounters a script tag. It has to halt the parsing and rendering of the page to download the linked .js file and evaluate it as this may alter the downstream HTML, or define JavaScript state required by later script files.

Synchronously loading JavaScript files guarantees correctness, but this approach is often too cautious. For example, if first.js and second.js do not modify mutually observable state, the browser should be free to download and evaluate the files in whatever order maximizes the utilization of the network and the CPU. However, pages do not expose such fine-grained dependency information to browsers…

(Yes, “ tags can be marked with async or defer attributes, but by default they have neither. In the test corpus of 200 popular sites, this accounts for 98.3% of all scripts…).

The Scout tool is used to load a page offline and produce a fine-grained dependency graph that is much more detailed than those produced by prior frameworks. “For 81% of the 200 real-world pages that we examined, our new graphs have different critical paths than those of graphs from prior work.”

Polaris is a dynamic client-side scheduler that uses the dependency graphs created by Scout to reduce page load times:

When a user makes a request for a Polaris-enabled page, the server returns a scheduler stub instead of the page’s original HTML. The scheduler stub includes the Polaris JavaScript library, the page’s fine-grained dependency graph (as generated by Scout), and the original HTML. The Polaris library uses the Scout graph, as well as dynamic observations about network conditions, to load objects in an order that reduces page load time.

Given simply lexical dependency information, then:

Scout finds out the true dependencies, not just the potential ones. It captures three types of data flows involving the JavaScript heap and the DOM state belonging to HTML and CSS:

The content of web pages is recorded using Mahimahi. Scout then rewrites each JavaScript and HTML file in the page adding instrumentation to log the fine-grained data flows across the JavaScript heap and the DOM. The page is then loaded in a regular browser and the log is used to generated the dependency graph.

For a given page, a web server may generate a different dependency graph for different clients… The server-side logic must run Scout on each version of the dependency graph. We believe that this burden will be small in practice, since even customized versions of a page often share the same underlying graph structure (with different content in some of the nodes).

Those additional edges have a dramatic impact on the characteristics of dependency graphs. For example, adding fine-grained dependencies alters the critical path length for 80.8% of the pages in our corpus.

Polaris is written completely in JavaScript and can be run on unmodified commodity browsers. It combines the dependency graph produced by Scout with observations about current network conditions to determine the dynamic critical path for a page.

To load a page using Polaris, a web server is configured to respond to page requests with the Polaris scheduler stub HTML. This contains four components:

Across the 200 sites in test corpus, the schedule stub increased page size by 36.5KB (3%) at the median.

Since modern browsers limit a page to at most six outstanding requests to a give origin, Polaris maintains per-origin priority queues.

With the exception of the top-level HTML (which is included in the scheduler stub), each object in the dependency graph belongs to exactly one queue. Inside a queue, objects that are higher in the dependency tree receive a higher priority, since those objects prevent the evaluation of more downstream objects. At any given moment, the scheduler tries to fetch objects that reside in a dynamic critical path for the page load. However, if fetching the next object along a critical path would violate a per-origin network constraint, Polaris examines its queues, and fetches the highest priority object from an origin that has available request slots.

… we demonstrate that Polaris can decrease page load times across a variety of web pages and network configurations: performance improves by 34% and 59% for the median and 95th percentile sites, respectively. Polaris’ benefits grow as network latencies increase, because higher RTTs increase the penalty for bad fetch schedules. Thus, Polaris is particularly valuable for clients with cellular or low-quality wired networks. However, even for networks with moderate RTTs, Polaris can often reduce load times by over 20%. 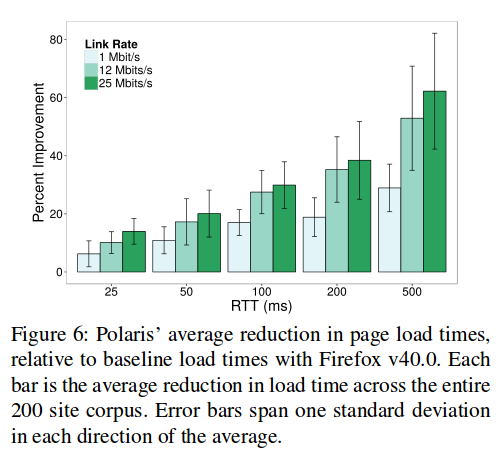 A closer look at three sites, Apple, ESPN, and Weather.com shows the impact the dependency graph has on the benefits that Polaris can bring: 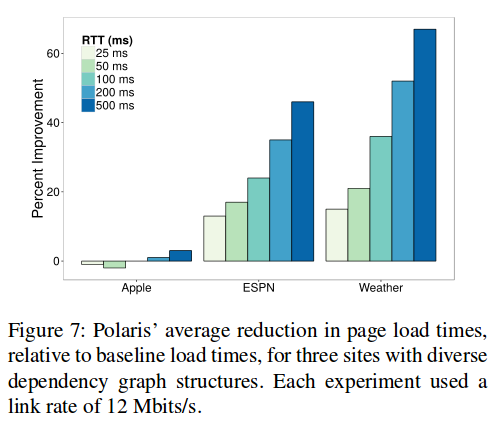 Apple’s home page has a flat dependency graph such that once the top-level HTML is loaded, all other objects can be fetched and evaluated in an arbitrary order. For low RTTs, this makes Polaris slower than the baseline.

Weather.com has a much more complex dependency graph, which enables Polaris to beat the baseline handsomely. 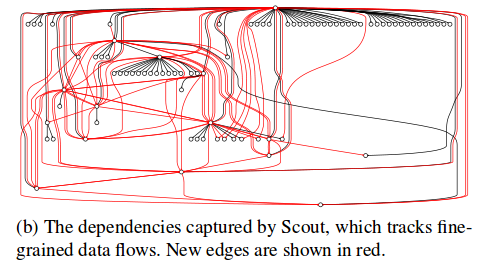 Polaris was also tested in conjunction with SPDY and found to be complementary: load times using Polaris over SPDY are 2.05%-4.03% faster than those with Polaris over HTTP/1.1.