Do you remember Herb Sutter’s ‘The Free Lunch is Over’ article? (Hard to believe that was written over 11 years ago!). Herb Sutter also posted a great update in 2012, ‘Welcome to the Jungle’. In the conclusion of that piece Sutter writes:

Mainstream hardware is becoming permanently parallel, heterogeneous, and distributed. These changes are permanent, and so will permanently affect the way we have to write performance-intensive code on mainstream architectures.

I bring all this up because the publication of the original article caused a wave of interest in programming languages that could make dealing with concurrency easier. Today’s paper is about the fundamental approach to concurrency built into the type system of the Pony programming language that statically ensures freedom from data races, and supports an actor-based programming model.

We provide a type system that ensures data race freedom statically for an actor-model language while also providing a way to type actors themselves, in the mould of active objects, and without placing any restrictions on the structure of messages. In addition, the type system is amenable to efficient implementation, and we have implemented it for the Pony programming language.

The final twist is that Pony’s reference capabilities do not express what a subject is able to do, but what the subject is not able to do (denied). Thus the paper title: “Deny Capabilities for safe, fast actors”.

A behaviour is executed asynchronously by the receiving actor, and a given actor executes only one behaviour at a time making behaviours atomic. While executing a behaviour, a receiver sees itself (i.e. this in the behaviour) as ref, and is able to freely read from and write to its own fields.

Here’s an example definition of an actor and behaviour, using iso and tag reference capabilities (we’ll explain what those are in a moment), and also the use of consume .

The iso type qualifier on a reference (henceforth, an iso variable) means that no other reference (within the same actor, or globally) can read from or write to that object. The object is isolated iso is used to pass mutable data between actors.

A new alias to an iso reference must therefore be neither readable nor writeable (since the meaning of iso is to deny that capability to all other references). A reference that is neither readable nor writeable is a tag reference. What use is a tag variable then? We can alias it (pass it as a parameter, assign it to other tag variables), and we can also invoke behaviours on it. tag is the default reference capability for actors (and ref is the default for classes).

What if instead of creating a new alias to an iso reference we wanted to pass ownership to someone else? This is what consume is used for in the code sample above, it is a destructive read which transfers ownership.

Here, we mutate list1 by assigning list2 to its next field, maintaining isolation for both list1 and
list1.next. Similarly, we could read from or write to fields of list1 since path traversal is allowed. This also allows calling methods on isolated references and fields of any path depth.

In addition to iso and tag there are four other reference capabilities: ref, val, box, and trn.

A trn reference makes a novel guarantee: write-uniqueness without read uniqueness. By denying global read/write aliases, but only denying local write aliases, it allows an object to be written to only via the trn reference, but read from via other aliases held by the same actor. This allows the object to be mutable while still allowing it to transition to an immutable reference capability in the future, in order to share it with another actor.

In case you’re finding all of this hard to keep track of, I’ve compiled the table below. 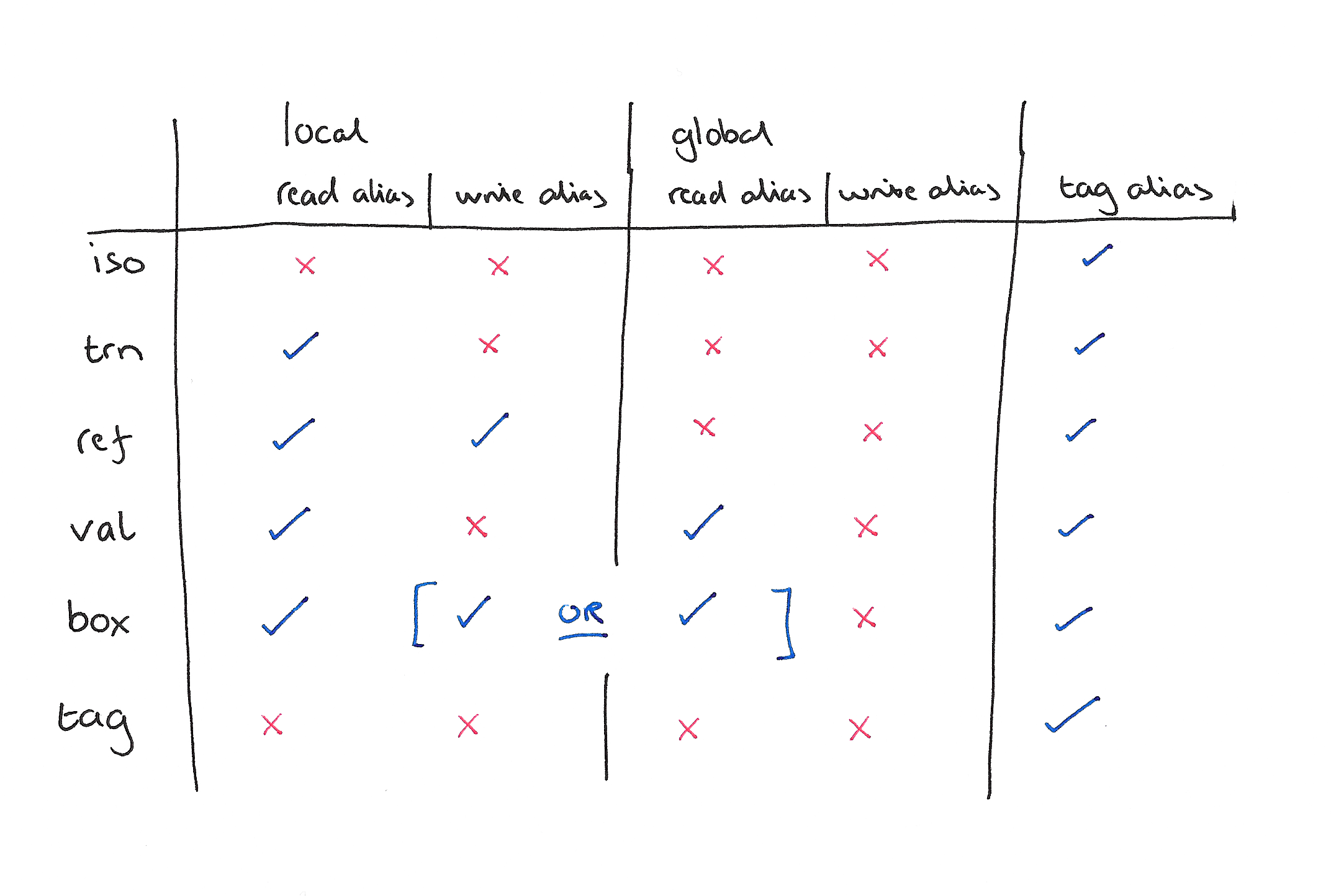 The Pony Language Documentation has a good summary too. In the paper you’ll find the full syntax, type system, and operational semantics.

Actors introduce the question of who may read or update the actor’s fields, the possibility of synchronous calls on actors, and the type required for asynchronous calls. Field read and write requires that the actor should see itself as a ref. As a result, any other actor will see it as tag. Therefore no other actor except the current one will be allowed to observe an actor’s fields – a nice consequence of the type system. By a similar argument, because the actor sees itself as ref, any other paths that point to it will do so as box, ref, or tag, and this means that the actor may call synchronous methods on itself, provided that the receiver reference capability of the method declaration is ref, box, or tag. Interestingly, for asynchronous (behaviour) calls, the receiving actor only needs to be seen as a tag…

Table 4 provides a nice comparison to the type systems of other languages, including Erlang, Scala, and Rust. 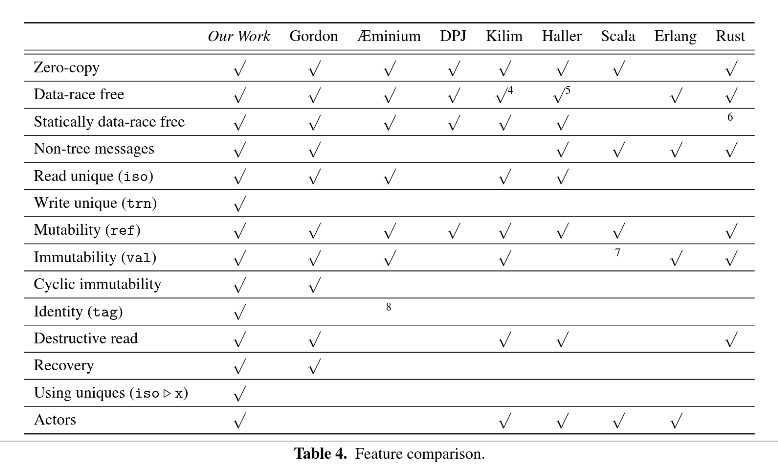 To minimise the number of required type annotations, Pony uses default reference capabilities (tag for actors, ref for objects, val for primitives) and the compiler can infer annotations locally. In approximately 10Kloc in the standard library, 89.3% of types require no explicit annotation.

So far we’ve addressed the “Safe” part of the paper title. Now let’s briefly turn our attention to “Fast.”

Deny properties are also amenable to a highly efficient implementation. We have benchmarked our language against other actor-model languages with the CAF benchmark suite and against MPI with the HPCC RandomAccess benchmark. Results are the average of 100 runs, normalised against Erlang performance on a single core such that performance improvement linear to core count would be shown as an straight line sloping up. We chose to normalise against Erlang because it is a mature system with consistent performance across core counts, with little jitter.

The charts below show impressive performance against Scala and Erlang, in a scenario constructed to be worst-case for Pony. (Note that the CAF system is neither garbage collected nor data race free). 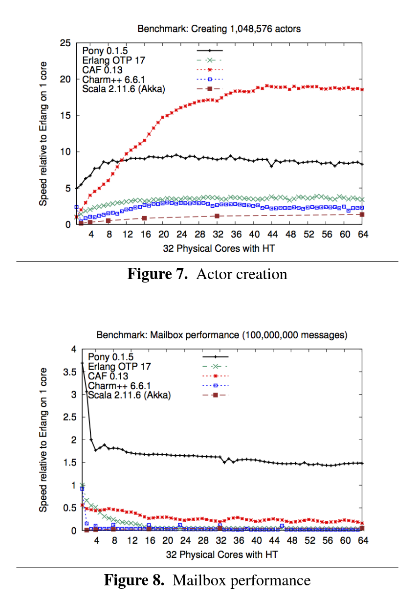 The full Pony language as implemented in the compiler includes additional features, such as generic types, traits, structural types, type expressions (unions, intersections and tuples), a non-null type system, sound constructors, pattern matching, exceptions, and garbage collection. The Pony runtime will eventually support distributed computation, without a reduction in single-node performance. The compiler, a web-based development sandbox, and a language tutorial are available at http://ponylang.org.