This is the final Desert Island Paper choice from Jonas Bonér, and a great way to round out the week. ‘Out of the Tar Pit’ was the 10th paper that I covered in the #themorningpaper series, but at that time I was only giving highlights on twitter, not via the blog format. So I’m grateful for a chance to revisit it. It’s a long read at 66 pages, but written in a very easy to digest essay style. The crux of the argument is that complexity lies at the root of our problems with software systems. By separating the essential (to the problem domain) complexity from any accidental complexity – and avoiding the latter altogether wherever possible – the authors argue for a better way of building software.

Complexity and its causes

Complexity is the root cause of the vast majority of problems with software today… The primary status of complexity as the major cause comes simply from the fact that being able to understand a system is a prerequisite for avoiding all of them, and of course it is this which complexity destroys.

How do we try to understand systems? We can try to understand a system from the outside, by testing it and seeing what it does, but this approach has limits. Far more important is the process of informal reasoning. This is greatly hampered by state.

The mental processes which are used to do this informal reasoning often revolve around a case-by-case mental simulation of behaviour… As the number of states – and hence the number of possible scenarios that must be considered – grows, the effectiveness of this mental approach buckles almost as quickly as testing… For every single bit of state that we add, we double the total number of possible states.

State also contaminates stateless procedures if they make use of – even indirectly – any other procedure that is stateful.

…it is our belief that the single biggest remaining cause of complexity in most contemporary large systems is state, and the more we can do to limit and manage state, the better.

After state, control logic is the biggest source of complexity. “When a programmer is forced (through use of a language with implicit control flow) to specify the control, he or she is being forced to specify an aspect of how the system should work rather than simply what is desired.”

Like basic control such as branching, but as opposed to sequencing, concurrency is normally specified explicitly in most languages. The most common model is “shared state concurrency” in which specification for explicit synchronization is required. The impacts that this has for informal reasoning are well known, and the difficulty comes from adding further to the number of scenarios that must mentally be considered as the program is read.

In the same vein, we’ve seen again and again that distribution brings with it the same problems.

Duplication is a prime example of this – if (due to state, control, or code volume) it is not clear that the functionality already exists, or it is too complex to understand whether what exists does exactly what is required, there will be a strong tendency to duplicate. This is particularly true in the presence of time pressures.

Powerful languages can also be a source of complexity when trying to understand a system:

The bottom line is that the more powerful a language (i.e. the more that is possible within the language), the harder it is to understand systems constructed in it.

Moseley and Marks then turn their attention to programming language paradigms to see how they stack up. Object-orientation (‘from traditional passive objects to the active/actor styles’) can make it hard to enforce constraints across multiple objects, and introduces complexity of its own with concept of object identity.

The bottom line is that all forms of OOP rely on state (contained within objects) and in general all behaviour is affected by this state. As a result of this, OOP suffers directly from the problems associated with state, and as such we believe that it does not provide an adequate foundation for avoiding complexity.

In contrast, the primary strength of (pure) functional programming is that by avoiding state and side-effects the entire system gains the property of referential transparency. The problem of state moving from encapsulation within an object to a growing list of parameters that are passed around from function to function is discussed. “This does not detract from the general power of the functional approach.”

More generally, we would argue that whatever the language being used there are large benefits to be had from avoiding hidden, implicit, mutable state.

Writing in 2006, the authors lament that ‘such arguments have been insufficient to result in widespread adoption of functional programming.’ (Adoption and awareness has certainly increased since then, but not to the point that Moselely and Marks would desire).

We must therefore conclude that the main weakness of functional programming is the flip side of its main strength – namely that problems arise when (as is often the case) the system to be built must maintain some kind of state…. One potential approach is the elegant system of monads used by Haskell… Again, despite their huge strengths, monads have as yet been insufficient to give rise to the widespread adoption of functional techniques.

Logic programming “offers the tantalising promise of the ability to escape from the complexity problems caused by control.”

Essential Complexity is inherent in, and the essence of, the problem (as seen by the users).

Accidental Complexity is all the rest – complexity with which the development team would not have to deal in the ideal world (e.g. complexity arising from performance issues and from suboptimal language and infrastructure).

Note that the definition of essential is deliberately more strict than common usage. Specifically when we use the term essential we will mean strictly essential to the users’ problem (as opposed to – perhaps – essential to some specific, implemented system, or even – essential to software in general).

Essential complexity is that which even in the ideal world the team will have to be concerned with. However,..

given that in the real world not all possible ways are practical, the implication is that any real development will need to contend with some accidental complexity. The definition does not seek to deny this – merely to identify its secondary nature.

This state of affairs is absolute simplicity – it does not seem conceivable that we can do any better than this even in the ideal world. It is interesting to note that what we have just described is in fact the very essence of declarative programming – i.e. that you need only specify what you require, not how it must be achieved.

All control logic is therefore considered to be accidental complexity.

Data may be provided directly to the system as input, or derived. All derived data is accidental state as it can always be re-derived. (See the Tachyon paper for an example of this concept in-the-large).

It is our belief that the vast majority of state (as encountered in typical contemporary systems) simply isn’t needed (in this ideal world). Because of this, and the huge complexity which state can cause, the ideal world removes all non-essential state.

How close is it possible to get to the ideal world in the real one?

There are two possible reasons why in practice – even with optimal language and infrastructure, we may require complexity which strictly is accidental:

We believe that – despite the existence of required accidental complexity – it is possible to retain most of the simplicity of the ideal world in the real one. We now look at how this might be achievable. Our recommendations for dealing with complexity (as exemplified by both state and control) can be summed up as avoid, and separate.

Avoid accidental state and complexity whenever you can, and if you can’t, then separate it from the rest of the system. “There is nothing particularly profound in these recommendations, but they are worth stating because they are emphatically not the way most software is developed today.” The foremost separation is a logic/state split in which all complexity of any kind is separated out from the pure logic of the system.

If we’ve separated out the parts in this way, they will each be of a very different nature.

… as a result, it may be ideal to use different languages for each. These languages would each be oriented (i.e. restricted) to their specific goal – there is no sense in having control specification primitives in a language for specifying state.

The recommended architecture is shown below: 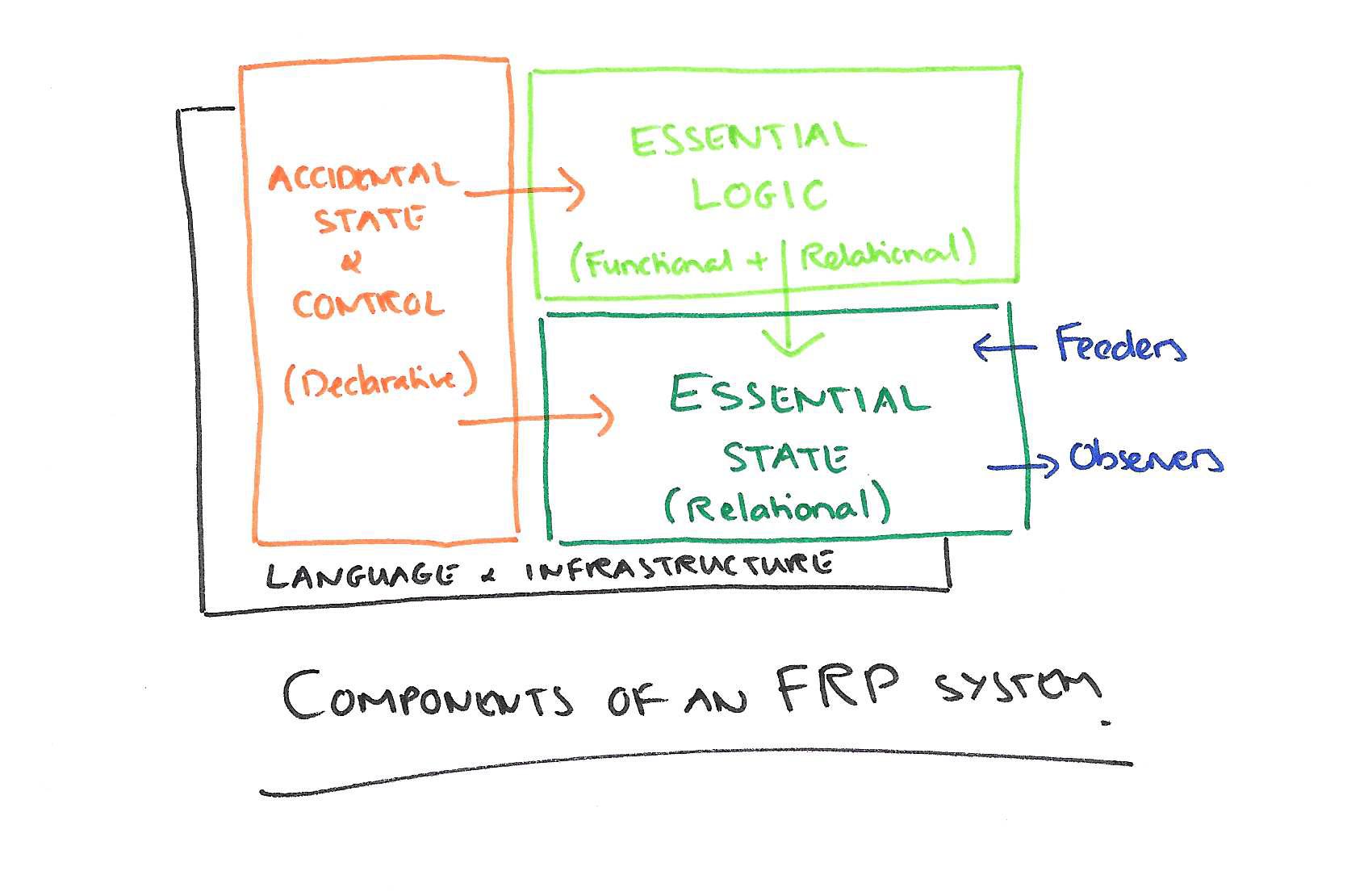 Essential state is the foundation of the system. It makes no reference to any of the other parts. Essential logic is the heart of the system (sometimes termed the ‘business logic’). It expresses what must be true, but does not say anything about how, when, or why the state might change dynamically. (We could also describe this as the system invariants to tie it back to the concepts we were looking at yesterday). The logic specification references only the essential state. Accidental state and control is the third component, and changing it can never affect the other two.

The key difference between what we are advocating and existing approaches (as embodied by the various styles of programming language) is a high level separation into three components – each specified in a different language. It is this separation which allows us to restrict the power of each individual component, and it is this use of restricted languages which is vital in making the overall system easier to comprehend. Doing this separation when building a system may not be easy, but we believe that for any large system it will be significantly less difficult that dealing with the complexity that arises otherwise.

This is augmented by functional programming, to give “Functional Relational Programming (FRP).”

FRP is currently a purely hypothetical approach to system architecture that has not in any way been proved in practice. It is however based firmly on principles from other areas (the relational model, functional and logic programming) which have been widely proven. In FRP all essential state takes the form of relations, and the essential logic is expressed using relational algebra extended with pure user-defined functions.

Essential state is a relational definition of the stateful components of the system. Essential logic contains derived-relation definitions, integrity constraints, and pure functions. The accidental state and control component contains a declarative specification of a set of performance optimizations for the system.

Feeder components convert inputs into relational assignments – i.e. cause changes to the essential state. Observer components generate output in response to changes which they observe.

At a minimum, observers will only need to specify the name of the relation which they wish to observe. The infrastructure which runs the system will ensure that the observer is invoked (with the new relation value) whenever it changes.

The concluding part of the paper is a worked example of a system to support a real estate business.

It’s interesting to compare the vision set out in “Out of the Tar Pit” with some of the research undertaken by Joe Hellerstein and his team at Berkeley.