HHVM is a virtual machine for PHP and Hack (a PHP extension) which is used to power Facebook’s website among others. Today’s paper choice describes the second generation HHVM implementation, which delivered a 21.7% performance boost when running the Facebook website compared to the previous HHVM implementation.

…the PHP code base that runs the Facebook website includes tens of millions of lines of source code, which are translated to hundreds of megabytes of machine code during execution.

I’m clearly suffering from an over-simplified understanding of what the Facebook web application actually does, but at the same time if I asked you to write a Facebook clone for just the website (not the backing services, not the mobile apps, etc.), would your initial estimate be on the order of tens of millions of lines of code???!

The starting point for HHVM is source code in PHP or Hack. Hack is a PHP dialect used by Facebook and includes support for a richer set of type hints. From the perspective of HHVM though the two languages are fundamentally equivalent. In particular, Hack’s type hints are only used by a static type checker and are discarded by the HHVM runtime.

The reason for discarding these richer type hints at runtime is that Hack’s gradual type system is unsound. The static type checker is optimistic and it ignores many dynamic features of the language. Therefore, even if a program type checks, different types can be observed at runtime…

Source code is parsed by the HipHop compiler (hphpc) to produce an abstract syntax tree (AST). HHVM v2 adds a new HipHop Bytecode-to-Bytecode compiler (hhbbc) which translates the AST into HHBC, the bytecode of HHVM. A number of analyses and optimisations are performed during the translation into HHBC, all of which are done ‘ahead-of-time,’ i.e., before the program actually executes.

HHBC is a stack-based bytecode, meaning that the majority of the bytecode instructions either consume inputs from or push results onto the evaluation stack, or both.

At runtime, HHVM combines a traditional threaded interpreter and a JIT compiler. An important feature of the JIT design is its use of side-exits which use on-stack replacement (OSR) so that compiled code execution can always stop at any (bytecode-level) program point and transfer control back to the interpreter, the runtime system, or to another compiled code region.

This ability to always fallback to the interpreter means that the JIT is free to focus on the mainline use cases and avoid all of weird corner cases that can occur in a dynamic language (e.g., multiplying a string by an array!). For large-scale applications, it also helps to manage CPU and memory overheads incurred by JIT compilation since not everything needs to be JIT-compiled.

The core of the paper describes the design and implementation of the new HHVM JIT.

The HHVM JIT is designed around four main principles:

Although each of these principles has been used by a number of previous systems, the combination of these four principles in a dynamic-language JIT compiler is novel to the best of our knowledge.

Type specialisation uses type information —which can be obtained either statically or dynamically— to generate type specific code. For example, code specialised to integers (which are not reference counted) can be more efficient. There’s a trade-off to be made here between the performance boost of specialised code, and the overheads of generating lots of type-specific routines (over-specialisation).

One of the key sources of dynamic type information that the HHVM JIT uses is profiling.

Beyond informing type specialisation, the profile information is also used for code layout and method dispatch.

Side-exits (aka uncommon traps) allow the JIT to specialize the code for common types without supporting the uncommon types that may not even be possible at runtime.

Code generation in HHVM is based on regions (region-based compilation), where regions are not restricted to entire methods, single basic blocks or straightline traces. Region-based compilation works well with type specialisation, profile-guide optimisations, and side-exits: profiling highlights regions that are then used to compile generated code for common types, with side-exits to fall back to interpreted execution in less common cases.

Region descriptors are lowered into a HipHop Intermediate Representation (HHIR), a typed representation using static single assignment (SSA) form. The type information comes from the hhbbc compiler and from profiling data. The HHIR level is where most of the code optimisations happen. 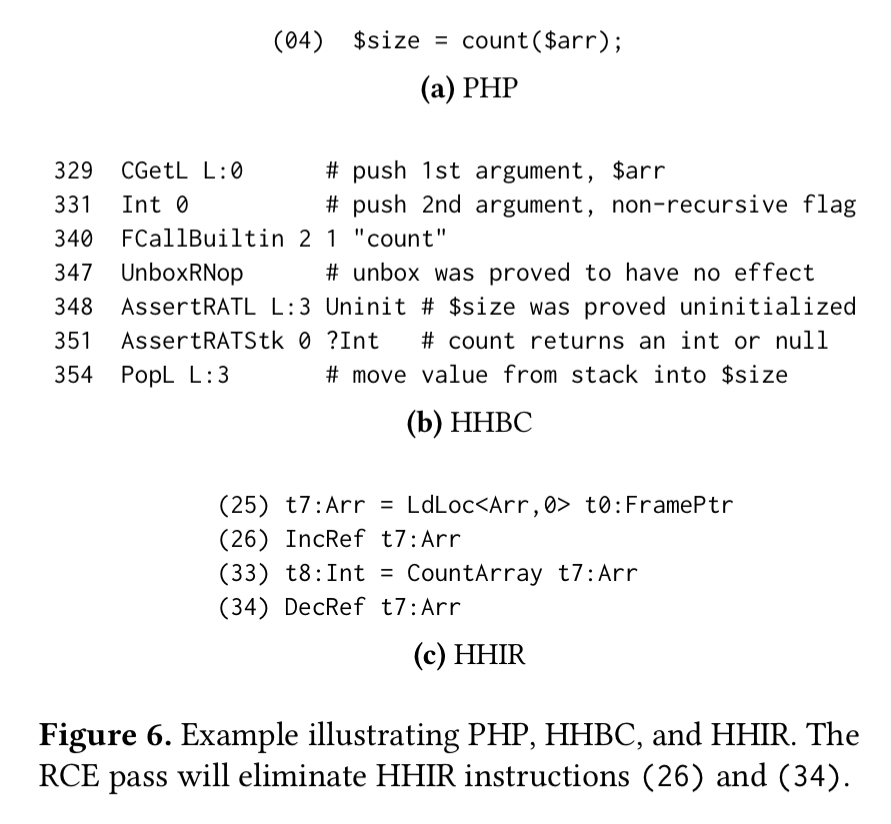 At a level below HHIR is a Virtual Assembly (Vasm) representation. It’s instruction set is very close to machine code, but supports an infinite number of virtual registers.

There are three different compilation modes within the HHVM JIT: live translations (the only kind supported in the first generation implementation), profiling translations (basic optimisations plus the insertion of block profiling), and fully optimised translations.

The full optimisation pipeline applies optimisations at each level of abstraction, as summarised in the figure below.

The evaluation is based on measurements taken from the Facebook website running on HHVM. The top line results can be seen in the following figure, which takes a bit of interpreting: 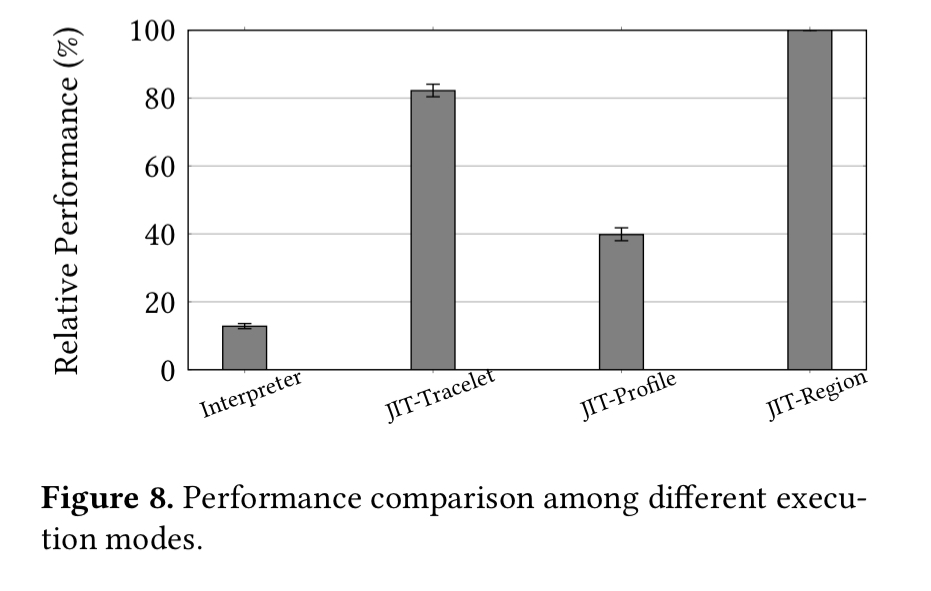 The contribution of the various optimisations can be seen in the following chart, which explores the relative slowdown with selectively disabling individual optimisations. 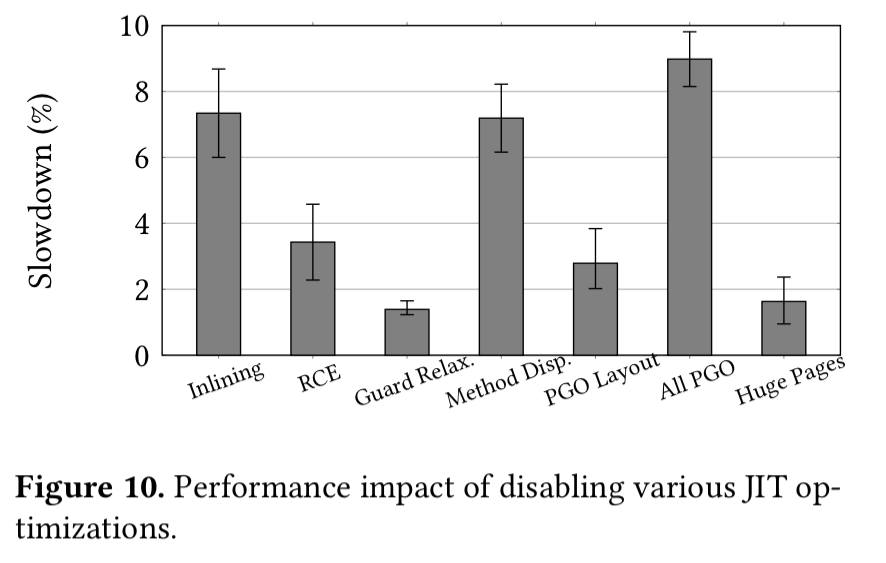