Polynomial-time algorithms for prime factorization and discrete logarithms on a quantum computer Shor, 1996

We’re sticking with the “Great moments in computing” series again today, and it’s the turn of Shor’s algorithm, the breakthrough work that showed it was possible to efficiently factor primes on a quantum computer (with all of the consequences for cryptography that implies). Wikipedia has a neat timeline of developments in quantum computing which tells us that Shor’s algorithm was actually executed on a real quantum computer for the first time in 2001 – when it factored 15!

The presentation of the algorithm in the paper is hard to follow when you first read it cold, but thankfully there are lots of materials out there which help to bring it to life. Here’s Scott Aaronson’s explanation using only basic math: “Shor, I’ll do it.” I also really enjoyed Kelsey Houston-Edward’s videos in the PBS Infinite Series (danger: you can lose many hours in that YouTube channel!), ‘The Math Behind Quantum Computers’ and ‘Hacking at Quantum Speed with Shor’s Algorithm.’

Beyond the algorithm itself, the paper also touches on interesting discussions around what it is that makes a problem amenable to an efficient solution on a quantum computer, and hence what classes of problems quantum computers may efficiently solve.

In the history of computer science… most important problems have turned out to be either polynomial-time or NP-complete. Thus quantum computers will likely not become widely useful unless they can solve NP-complete problems. Solving NP-complete problems efficiently is a Holy Grail of theoretical computer science which very few people expect to be possible on a classical computer. Finding polynomial-time algorithms for solving these problems on a quantum computer would be a momentous discovery.

Writing in 1996, Shor saw some ‘weak indications’ that quantum computers would not be able to solve NP-complete problems, but wasn’t yet prepared to rule that possibility out. Scott Aaronson has a wonderful 2008 piece in Scientific American exploring this question, ‘The limits of quantum.’ The key diagram is this one: 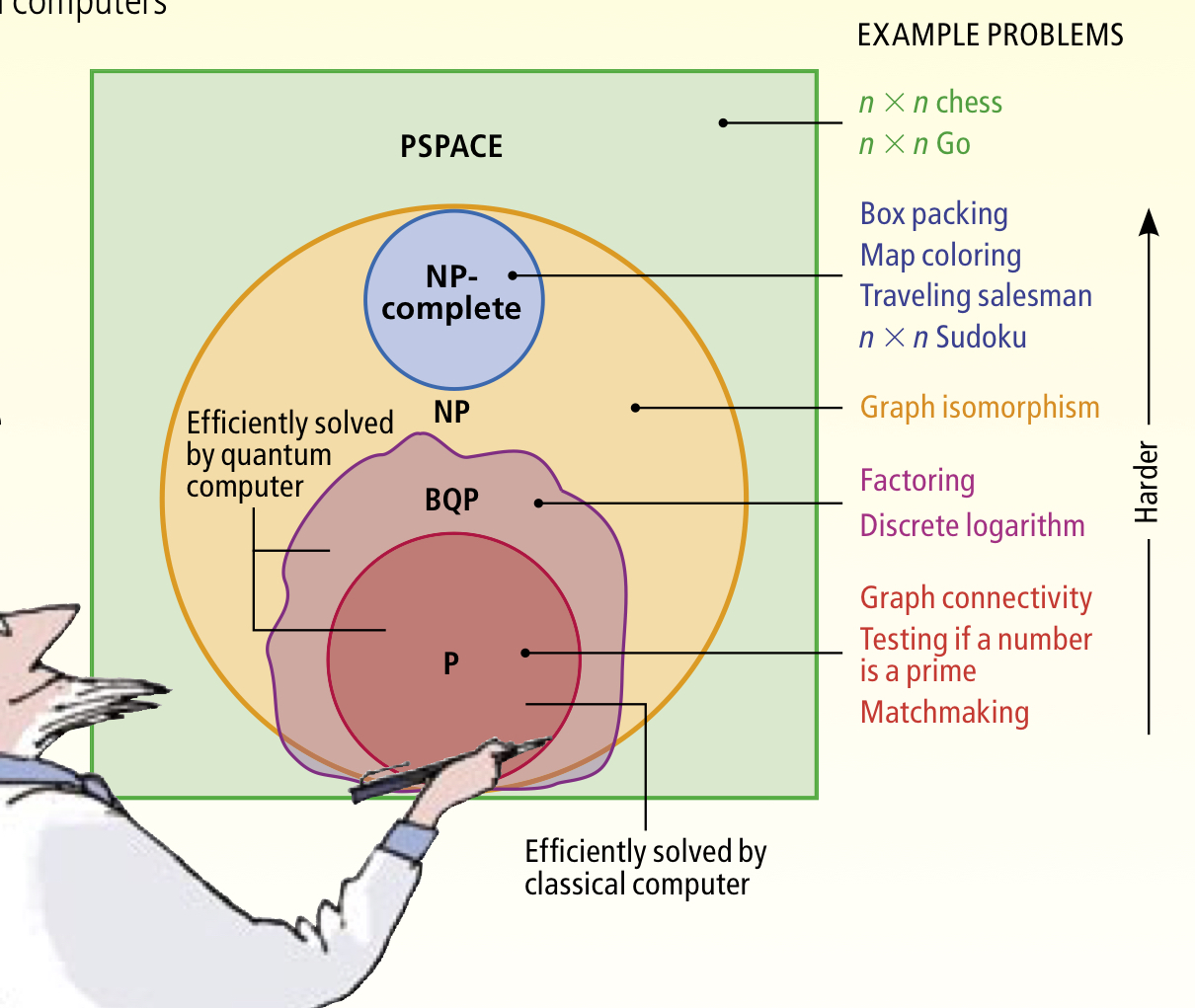 At the outer level we have PSPACE problems – these are problems that a conventional computer can solve using only a polynomial amount of memory, but possibly an exponential number of steps. In other words, they are polynomial in space (PSPACE), but not necessarily in time.

An important subset of PSPACE problems are the NP problems. These are problems whereby it takes a potentially exponential number of steps to find a solution, but once a solution has been found, you can verify that it is indeed a solution in polynomial time.

What is it about a problem that places it in BQP \ P?

Through the magic of superposition, a quantum computer with n qubits can be in an arbitrary superposition of up to

different states simultaneously. When searching in a solution space therefore, a quantum algorithm can explore

possible solutions in parallel, in the same total elapsed time as it takes to explore any one solution. The tricky part though, is that you can’t inspect all of those

Extending our probability distribution analogy for a moment, so far we’ve been assuming that the distribution is uniform. But the distribution doesn’t have to be uniform. If we can exploit certain global properties of the overall solution space (not just features of point solutions within the space) we may be able to shape the distribution in our favour. In particular, if we can make it more likely that a randomly drawn sample actually is a solution, we can increase our odds of resolving to a solution when we take a measurement. On a physical level, what we want is that non-solutions destructively interfere with each other, and solutions constructively interfere, thus increasing the amplitude of the wave at solution points.

Now all we have to do is run the quantum computation a sufficient number of times, (say 100), and the solutions should rise to the fore because we’ll sample them more often. Problems in BQP \ P are those where we can find something in the overall structure of the solution space that allows us to do this distribution shaping trick.

Shor’s algorithm uses a little number theory to convert the problem of finding prime factors into an equivalent problem which reveals an overall structure in the solution space we can exploit along the lines we’ve just been discussing.

Here I’m going to follow Kelsey Houston-Edward’s high-level explanation of the algorithm, which has 4 main steps. Suppose we want to find the prime factors p and q of N. We proceed as follows:

Step 2 is both the tricky part (i.e., where we need to take advantage of quantum computation), and also the part that enables us to find and exploit a global property of the solution space. We construct a sequence

in this case, and

Steps 1, 3, and 4 we can do quite efficiently on a classical computer, but step 2 we can’t.

The quantum operation that does this for us is the Quantum Fourier Transform (QFT)! This is described in §4 of the paper. Back to Kelsey Houston-Edwards, who has a nice easy to follow explanation in her video starting at 8:50.

Consider a set of dials, with increasing number of points equally spaced on a unit circle:

Every dial starts off pointing to 3 o’clock. Now for each number x in the sequence move the hand of each dial one place counter-clockwise. When x = 1, record the positions of the hands. Here are the positions after we’ve processed ‘2,4,8,1’ :

Above each dial we’ve placed a point. Move that point by 1 unit in the direction the hand is pointing to when recording the hand positions..

Keep doing this as you move through the sequence, and you’ll find that most of the points just trace out a shape eventually returning to where they started. But the dial with the same number of positions as the period of the sequence will always be pointing in the same direction each time, and it’s path will extend off into the distance.

The lengths of the paths traced out are like the amplitudes, or probabilities of the corresponding state. So by following this process, we’ve greatly increased the chances of sampling the right answer.

Another way to think about this is in terms of interference. I mean, the key point about quantum mechanics — the thing that makes it different from classical probability theory — is that, whereas probabilities are always nonnegative, amplitudes in quantum mechanics can be positive, negative, or even complex. And because of this, the amplitudes corresponding to different ways of getting a particular answer can “interfere destructively” and cancel each other out.

For all periods other than the true one, the amplitude contributions cancel each other out, only for the true period do they all point in the same direction, “and that’s why, when we measure at the end, we’ll find the true period with high probability.”

Section 6 in the paper describes the algorithm for computing discrete logarithms, which also makes use of the QFT, but we’ll leave that for another day!