The Lawrence Berkeley National Laboratory (LBNL) have developed and deployed a new system for detecting credential spearphishing attacks (highly targeted attacks against individuals within the organisation). Like many anomaly detection systems there are challenges of keeping the false positive rate acceptable (not flooding security staff with alerts), while dealing with a large class imbalance (most emails are benign) and unknown underlying distribution. From 370M emails for example, they are looking for just 19 such spearphising campaigns. The team manage to achieve a false positive rate of 0.004% within a daily budget of 10 alerts. Security staff can process an entire month’s worth of alerts in just 15 minutes. That’s a very pragmatic and useable anomaly detection system! Even though the system is now deployed at LBNL, it does have a number of limitations,some of which seem quite important to me, but I guess every little helps!

Because of our approach’s ability to detect a wide range of attacks, including previously undiscovered attacks, and its low false positive cost, LBNL has implemented and deployed a version of our detector.

Credential spearphishing: the lure and the exploit

Credential spearphishing involves an attacker sending a carefully crafted deceptive email that attempts to persuade the victim to click on an embedded link. The link is to a website owned by the attacker, set up to look like a legitimate system, when the victim logs on to what they believe is the real system, the attacker steals their credentials.

From an attacker’s perspective, spearphishing requires little technical sophistication, does not rely on any specify vulnerability, eludes technical defenses, and often succeeds.

Spearphishing is the predominant attack vector for breaching valuable targets. Campaigns are specifically targeted at users who have some kind of privileged access or capability (senior executives, system administrators, …). Humans are the weakest link!

There a two elements to a spearphishing attack: the lure and the exploit. The lure aims to get the victim to click on a link, and thus must establish credibility through a sense of trust or authority.

Attackers typically achieve this by sending the email under the identity of a trusted or authoritative entity and then including some compelling content in the email.

Establishing trust starts with fooling the recipient into thinking the email has come from a trustworthy source. There are a variety of impersonation models: 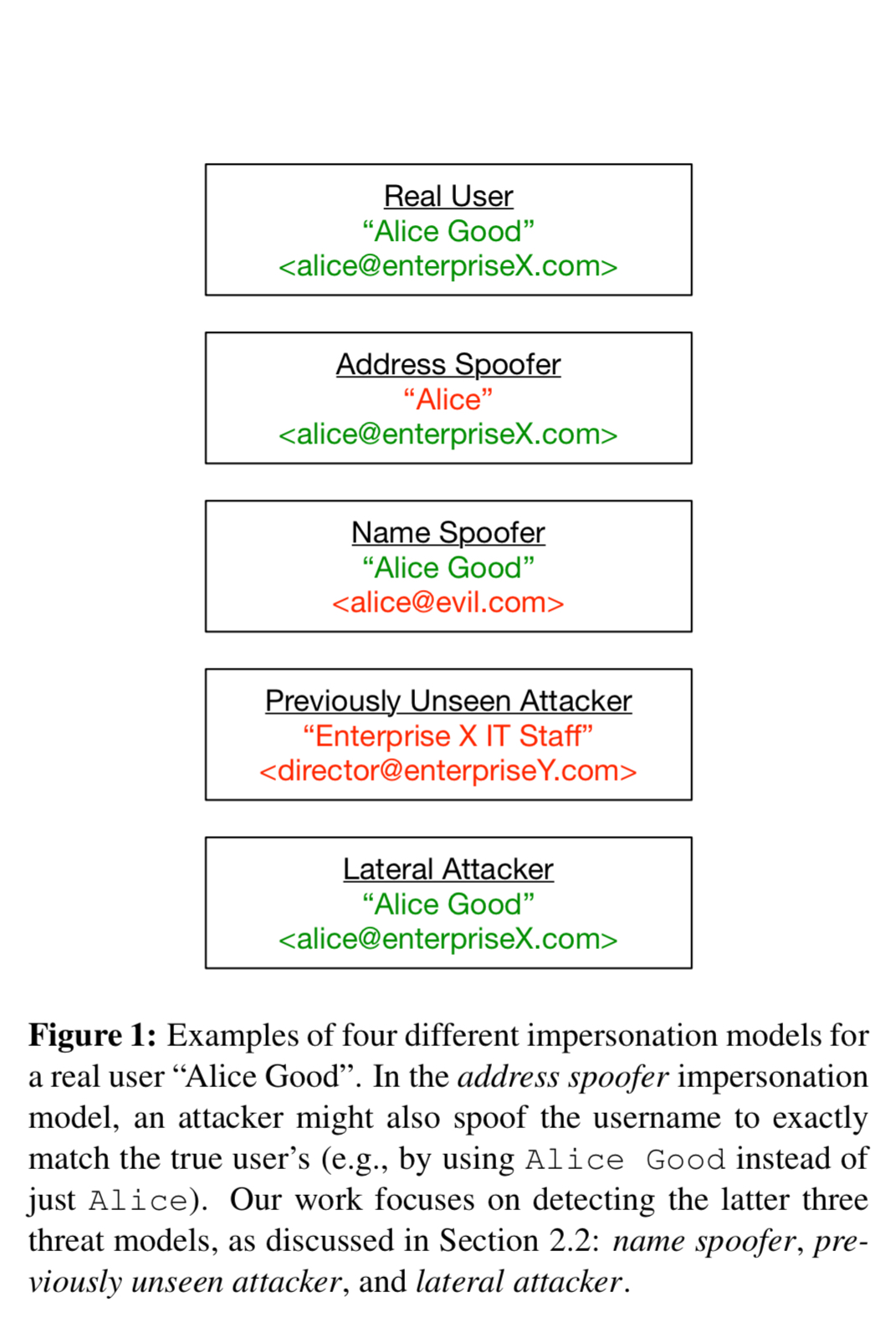 For credential spearphising, the exploit (payload) is a link to a credential phishing page.

So how do you find suspicious looking senders without generating lots of false alerts?

… a detector that only leverages the traditional approach of searching for anomalies in header values faces a stifling range of anomalous but benign behavior.

You could try looking for a From header with a recognised (previously seen) name, but a different email address. But multiple people do share names, and people also have multiple email addresses (personal accounts and so on). 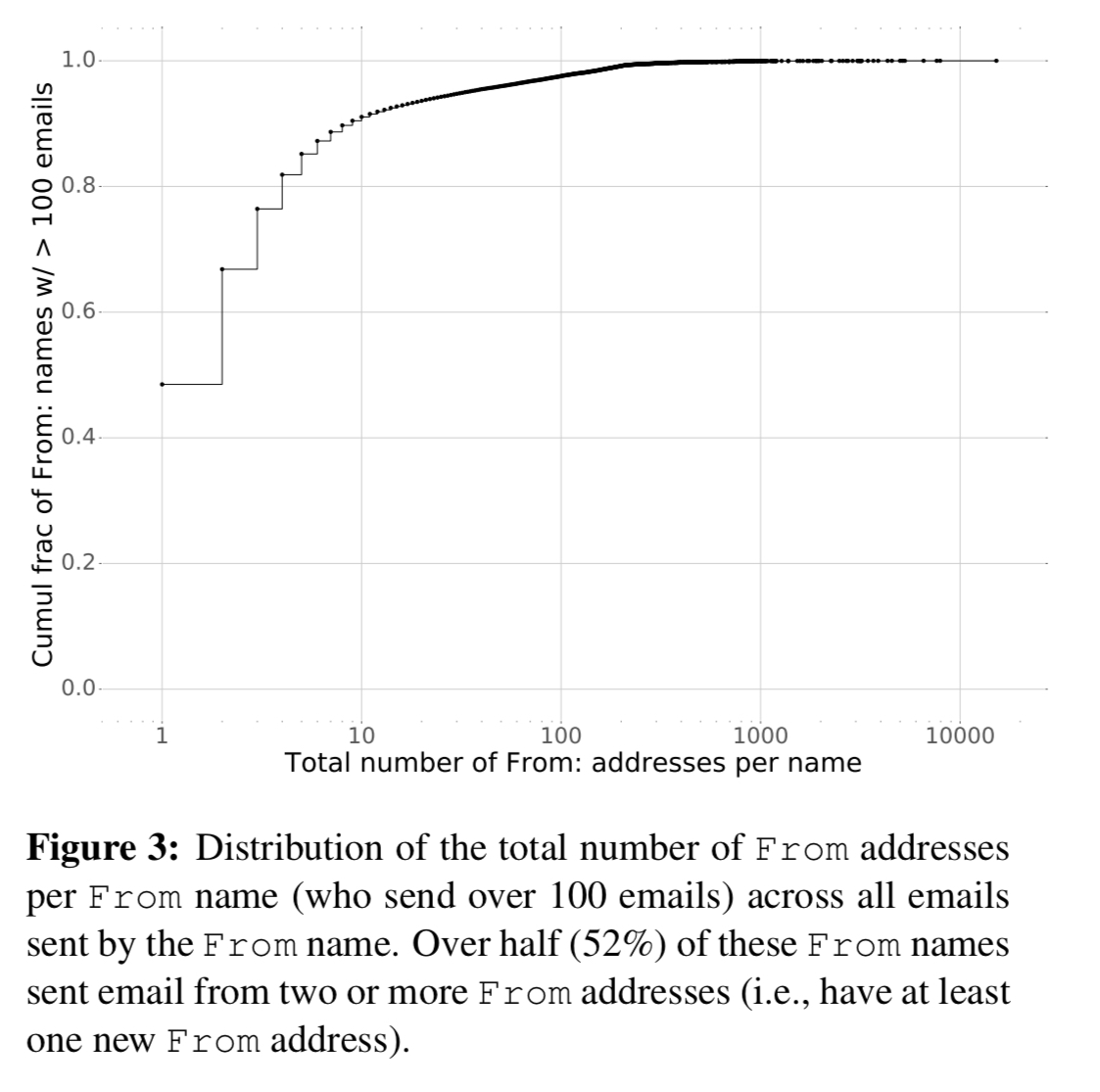 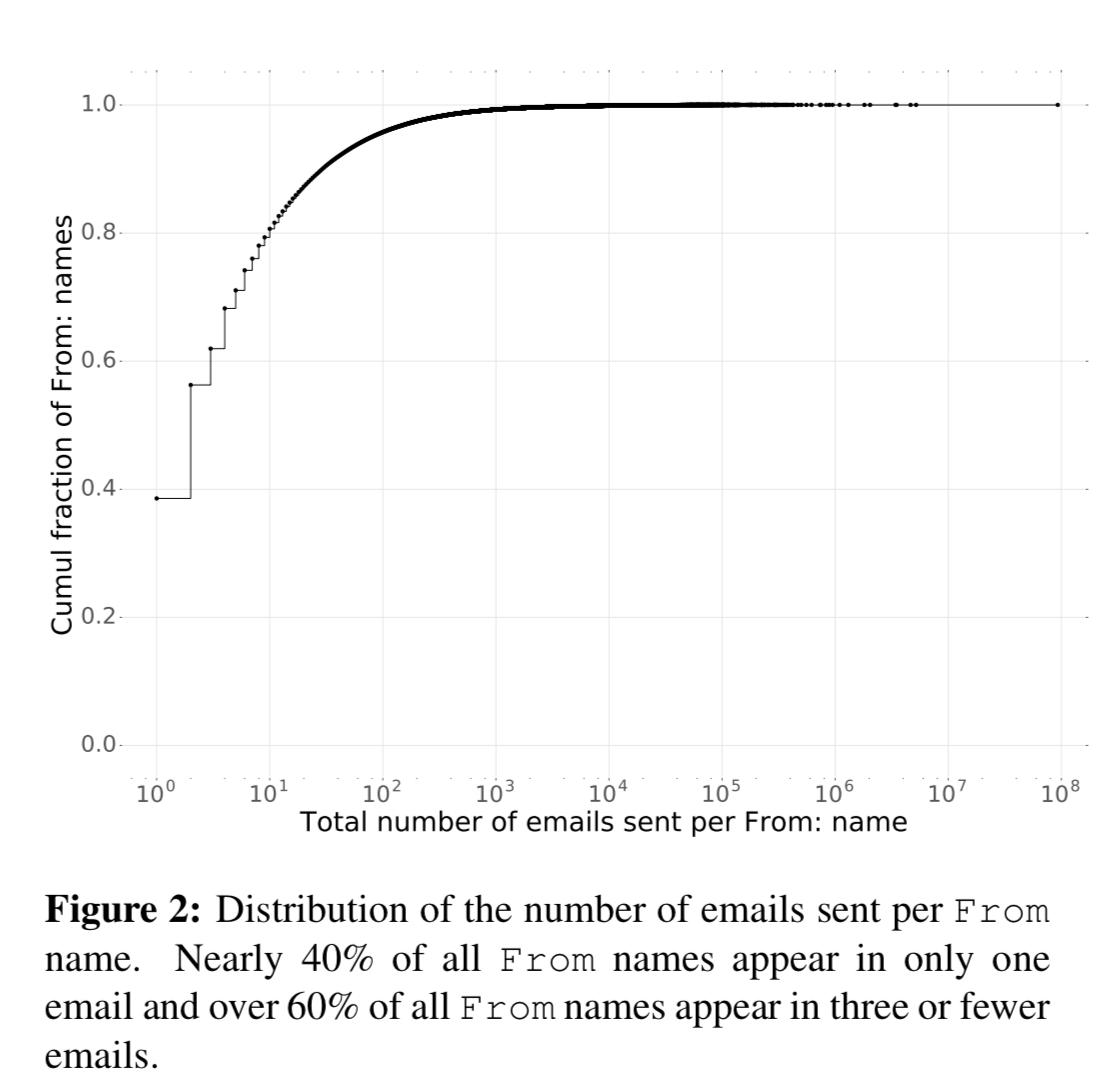 As well as multiple addresses per name, you also run into multiple names per address. For example “Foo <noreply at Foo.com>”, “Foo <help at foo.com>” and so on.

For credential spearphishing, the dangerous action is clicking on a link in an email that leads the victim to a credential phishing website. Thus, we analyze every email that contains a link that a user clicked on.

(This is one of the limitations in the current approach, and it seems kind of a big one to me – you can detect credential spearphishing after the victim has already clicked on the link, but in many cases by then the damage will already have been done. Rapid detection is still better than no detection though…).

A domain’s reputation (the fully-qualified domain name in a URL) is based on two features in the model:

For previously unseen attackers the features rely on the attacker seeking to avoid detection by only using the spoofed identity infrequently:

Lateral attacks features look at where the email was sent from during a login session – is this a place the employee being spoofed usually sends email from?

Even with these features, detecting anomalies efficiently is hard. We can’t set manual thresholds because we don’t know the true distribution of feature values. We can’t use supervised learning because there is an extreme class imbalance. Standard unsupervised or semi-supervised anomaly detection mechanisms don’t take into account direction (in our setting, a domain with very few visits is suspicious, one with an unusually large number is not). They also flag anomalies if only one or a small number of features are anomalous, whereas the authors are looking for attacks that are suspicious in all feature dimensions (for each combination of FQDN features + From spoofing attack vector – there are actually three sub-detectors). Finally, classical techniques are parametric, either assuming an underlying distribution or that parameters can be set using domain knowledge.

These requirements are problematic for spearphishing detection since we do not know the true distribution of attack and benign emails, and the underlying distribution might not be Guassian, and we do not have a sound way to select the parameters.

So instead, the authors use a simple ranking approach they call Directed Anomaly Scoring (DAS).

At a high level, DAS ranks all events by comparing how suspicious each event is relative to all other events. Once all events have been ranked, DAS simply selects the N most suspicious (highest-ranked) events, where N is the security team’s alert budget.

The score for an event E is computed by looking at the total number of other events where E’s feature vector is at least is suspicious as the other event in every dimension.

Every night the detector collects all the click-in-email events for the past month and computer their associated feature vectors. For each sub-detector, the

most suspicious events (where

is the daily alert budget) are saved in a ComparisonSet. Then in real time, when the detector observes a click-in-email event from the NIDS (Network Intrusion Detection System) it is evaluated against the comparison set. If any of the current click’s feature vectors are at least as suspicious as any of the feature vectors in the comparison set for the respective impersonation model, then the detector generates an alert.

With the alert threshold set at 10 alerts per day, the system was evaluated over 4 years worth of email logs and the LBNL incident database containing 7 known successful spearphishing attacks, and 15,521 manually investigated and labelled alerts.

The detector missed one successful attack from the LBNL database – this used a now deprecated Dropbox feature that allowed users to host static HTML pages under one of Dropbox’s primary hostnames. This feature led to a large number of phishing attacks against Dropbox users! The detector also found 2 previously undiscovered attacks that did in fact successfully steal credentials.

Some limitations that jumped out to me with the current system: